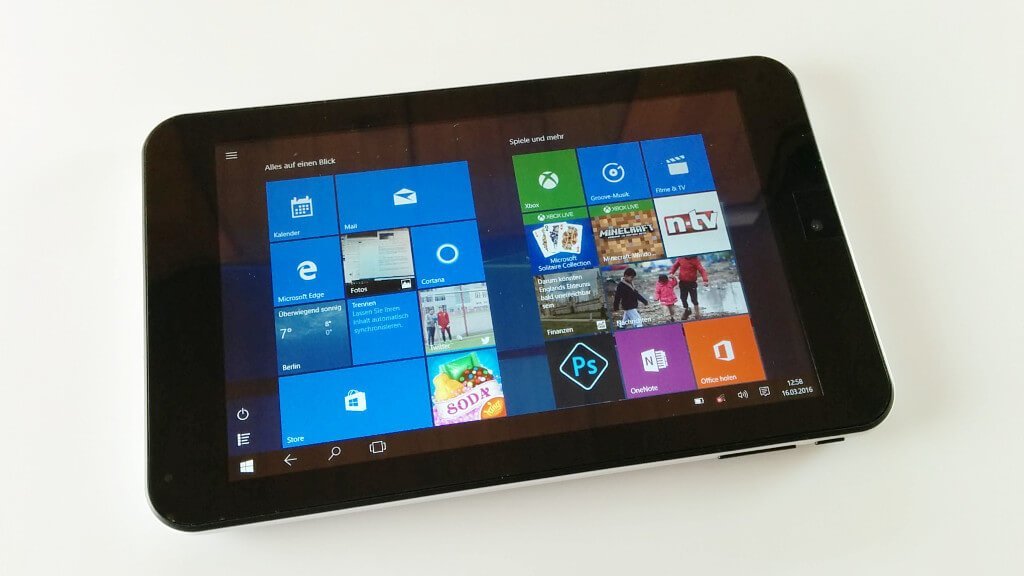 The iRULU WalknBook 2Mini was delivered including a charger (5V 2A), a micro USB data or charging cable, a warranty card and an operating manual. A screen protector was already on the tablet. 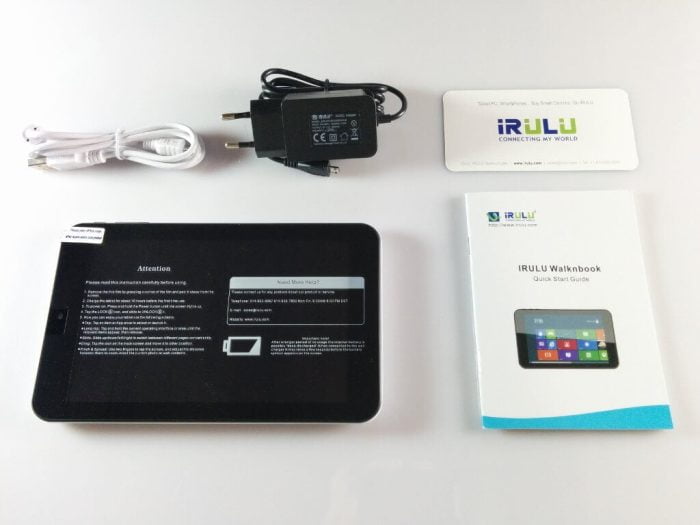 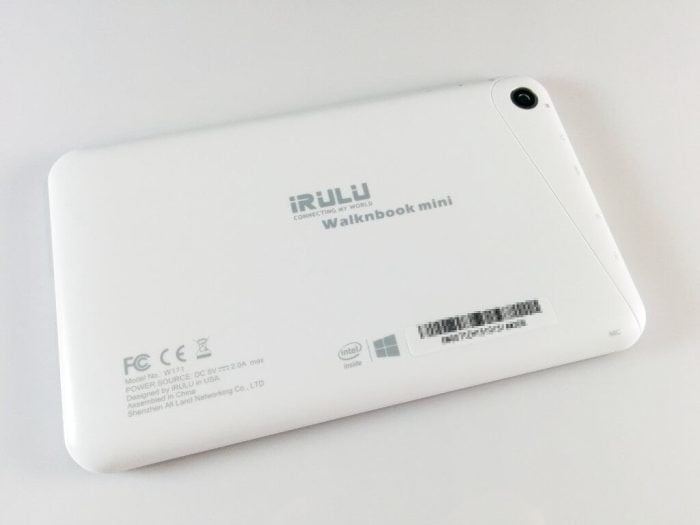 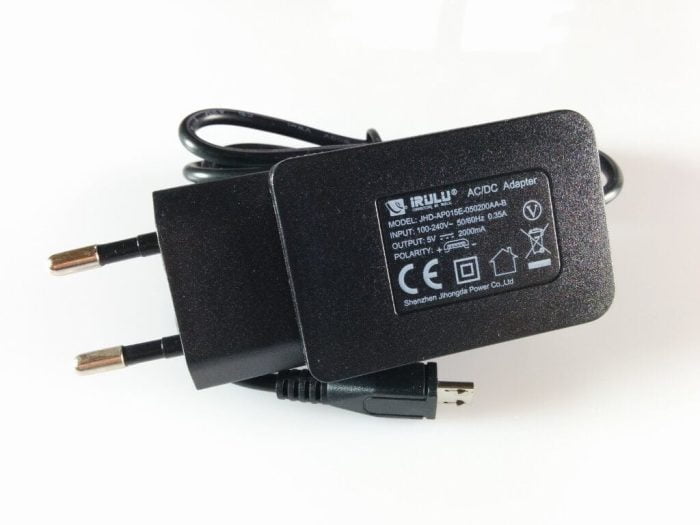 The housing of the iRULU W2Mini is made of white plastic. On the back of the tablet is also printed with symbols of the individual connection options. In addition to a micro USB port, there is also an SD card slot, a micro HDMI port and an audio output. A microphone is already integrated in the W2Mini. In addition to the power button and the volume rocker, the small iRULU tablet also has a Windows button. The keys have a good pressure point and sit firmly in the case. In addition, the tablet has a rear camera and a front camera.

In the first hands-on I really liked the iRULU WalknBook 2Mini. Although it is mostly made of plastic, it feels good and is also very clean.

The 7-inch IPS display has a maximum resolution of 1280x800 pixels. Individual pixels can hardly be seen with the naked eye. The display is set to be quite cool in the basic settings. The colors still look strong and natural. If the display is too "cold" for you, you can make display settings as you are used to with a Windows PC. Since the W2Mini has built in an Intel processor, the display is controlled via the implemented Intel HD graphics surface. Here you can, among other things, adjust the resolution (1024x768; 1280x720 and 1280x800), as well as make settings for the coloring (brightness, contrast, gamma, hue and saturation).

The viewing angle stability of the display is good. Regardless of how you tilt the tablet horizontally or vertically, the color fastness is largely retained, and characters can be read without any problems. 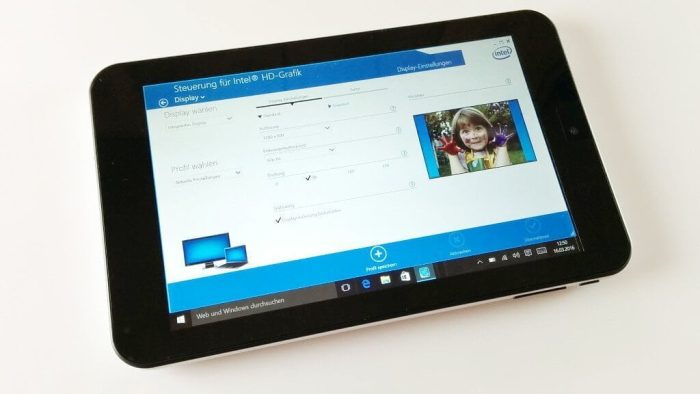 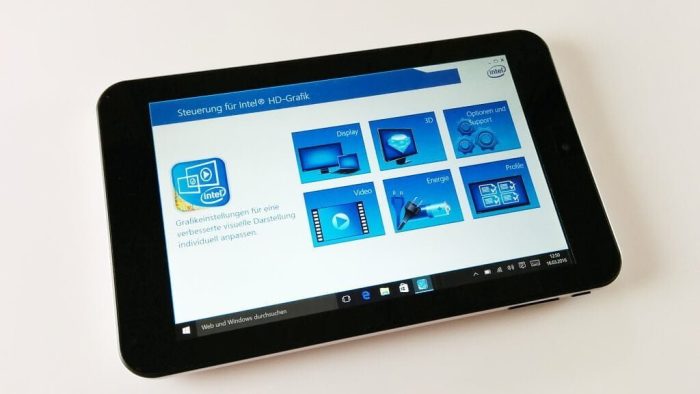 The iRULU WalknBook W2Mini works with an Intel Atom processor. The model name is an Intel BayTrail-CR Z3735G. This is a 64-bit quad-core processor with a clock rate between 1.33 and 1.83 GHz and a 2MB L2 cache. The processor graphics has a basic clock rate of 311MHz and a burst rate of 646MHz. The RAM amounts to 1GB, the internal memory to 32GB (expandable).

In everyday life you can experience with this system a largely fluently running Windows 10. The user interface can be operated fluently in the desktop as well as in the tablet mode. The access times are also low and allow a pleasant work. The wake-up times can also be estimated as low with a maximum of 5 seconds after a long sleep.

Playing is also possible with this tablet. I tested Minecraft and Half-Life (Steam). Minecraft is fairly fluid with this tablet. Single FPS burglaries occur, but I have not noticed this as unpleasant. In Half-Life, the iRULU W2Mini achieves rich 30 FPS, which are also held throughout. 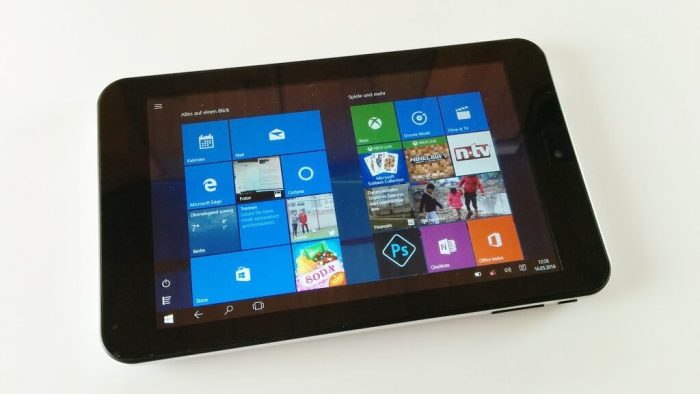 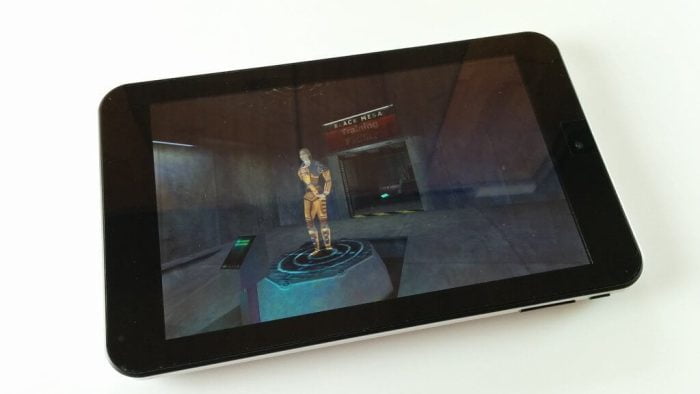 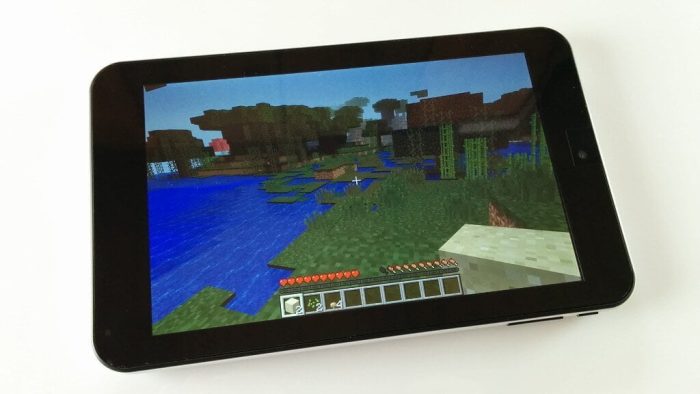 A full Windows 10 Home Edition was preinstalled on this tablet. An Office package (Office 365) consisting of Word, Excel and PowerPoint is also preinstalled.

Anyone who is already familiar with Windows 10 will not have any problems with this tablet either. Everything is identical to the desktop version. The iRULU WalknBook W2Mini can be operated in desktop mode as well as in tile mode adapted for tablets. Thanks to the integrated Bluetooth module, a mouse and keyboard can also be connected to the tablet, which makes it even easier to use in desktop mode.

All programs compatible with Windows 10 and familiar from the home PC can be installed. To use the Microsoft App Store you have to create a user account at Microsoft. The default browser is Microsoft Edge.

The two cameras have a resolution of 2 megapixels (rear camera) and 0.3 megapixels (front camera). The cameras of the iRULU W2Mini do not have an autofocus or an LED flash. A camera app is also integrated in Windows 10. However, this offers a much smaller range of functions than conventional smartphone camera apps. 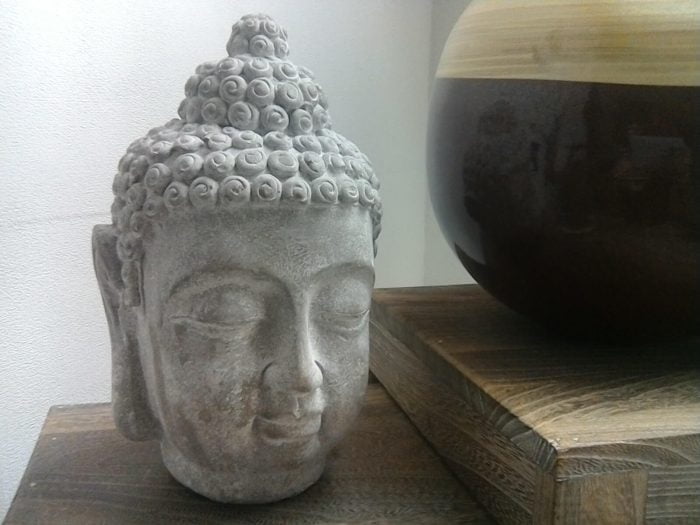 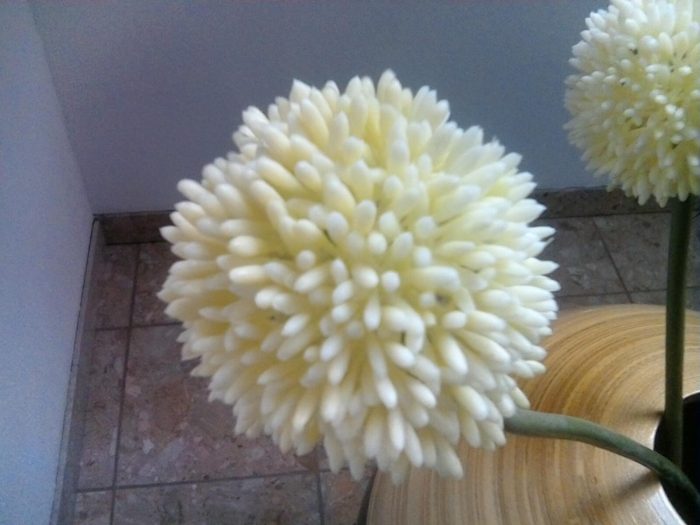 The integrated speaker of the W2Mini does not offer the best sound and the maximum volume could be a bit higher, but to spontaneously watch a YouTube video, he always enough. However, what bothers me is the slight background noise when using headphones. Especially with soft music you hear a slight humming in the background, which can be unpleasant in the long run.

The battery of the iRULU WalknBook 2Mini is specified with a capacity of 3400mAh. The tablet is charged after about 3 hours. In everyday life with a brightness of 25% and normal use (surfing, listening to music, office work) you can get through the day well with one charge. The active runtime is about 5 hours. With the power-saving mode active, the runtime can be extended by another hour.

The iRULU W2Mini is an interesting combination of PC and tablet. All possibilities of a Windows 10 PC were largely transferred to the small tablet. Especially for mobile office work, I would not miss the small 7 Zoller. Although the small size is not optimal for a permanent work, but on the way to quickly make a few notes on the go, the W2Mini is ideal. The performance of the iRULU tablet is sufficient for office work, but also for further activities, such as watching movies, listening to music or even playing games.