by Timo3. February 2018
The Insta360 Air is a clip-on 360 degree camera that works without its own battery and memory. Whether you should schedule this gadget on the next holiday trip and what the camera otherwise has on the box, more on this review.
Overview
Manufacturer/Model

The package includes everything you need for a first 360 degree recording. On-The-Go Insta360 Air is simply connected via USB and uses without your own battery or storage the components of the smartphone or tablet. Included in the delivery are thus next to the Camera with silicone protection only one flexible USB adapter cable, cleaning cloth, tool to wait for the camera, as well as a multilingual Manual. 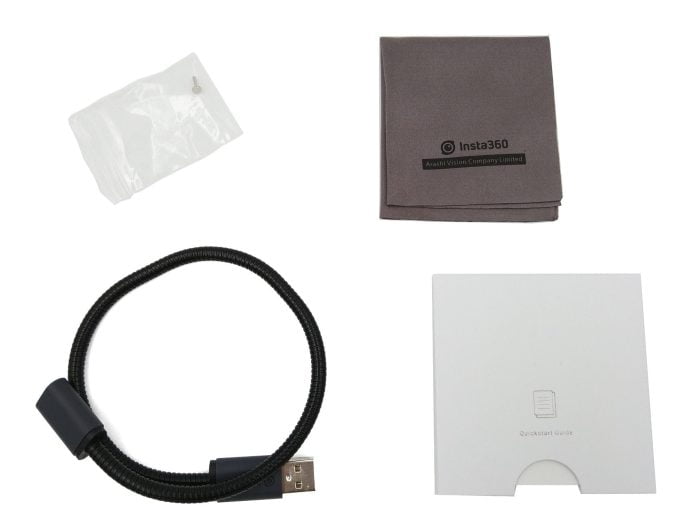 The 360 degree camera is available in two versions. In addition to one Model with the new USB Type-C standard Insta360 Air is also available for older devices that only have one Micro USB socket feature. The remaining hardware is identical in both versions, so only the connection differentiates. This connection confusion is unfortunately unfavorably solved. If you use two smartphones like me, where one uses the current USB-C standard and the other uses micro-USB, you can not avoid the use of a dongle. It would have been advantageous if the manufacturer would have integrated an adapter solution equal or at least a separate dongle included with the delivery.

With a Diameter of just 37.6 mm and a Weight of 26.5g The spherical Insta360 Air is one of the most compact 360 grade cameras. Even with the silicone protection, the size increases only marginally, so that the camera can be easily transported and stowed.

The camera is equipped with two F2.4 "fisheye" lenses, A power button or other control buttons are available because of the "Plug and Play" designs Not. Only one LED indicator know the current camera status. In addition to the USB port is still a small hole, which is used according to Insta360 for firmware updates. The operating instructions will not be discussed in detail. As far as processing is concerned, Insta360 Air has no hesitation. 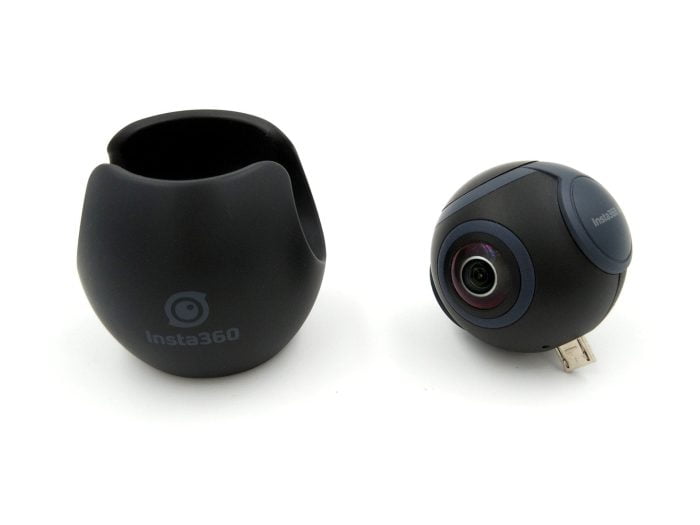 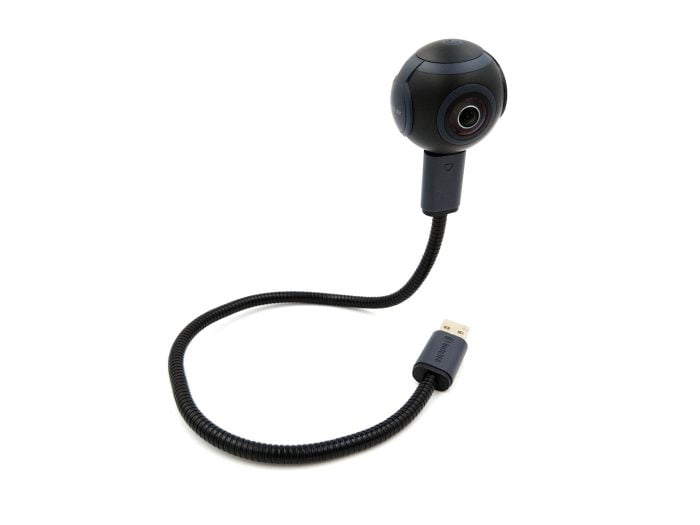 Unless one offered in the Google Play Store Insta360-air app installed, the camera can be used entirely according to the principle "Plug and Play". Plugged into the smartphone or tablet, the camera is immediately recognized and started with the app. So that the app can also be operated and the image is not upside down, this is automatically rotated by the app. Of course, this feature can also be turned off. 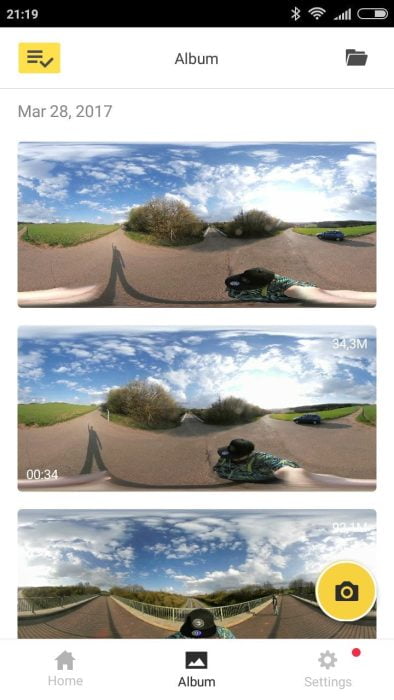 In a short introduction the functions of the app are explained. The language selection is limited to English, Chinese and Japanese. The app itself is clearly structured. In addition to one Community Part, where shootings can be shared, there is also one Albumwhat you can watch your own recordings and there is a sub item to general Settings, In the settings can be specified, among other things, whether the recordings in the Cloud There are settings for the camera itself, such as the recording limit, the watermark, or the recording location, as well as app settings and links to help topics.

For use on the PC, the supplied Flex cable must be used. Although the camera is detected without having to install any driver in order to display an accurate 360 degree image, the Insta360 Webcam software is required.

projects takes the Insta360 camera with a 3008 1504 x pixels Resolution on. Videos be with maximum 2560 x 1280 pixels at 30 images-per-second added. Information about the image sensor or the image processor does not make the manufacturer.

Update May 2017: With the latest firmware update, the camera is also able to record videos at a resolution of 3008 x 1504 pixels!

The app can be used to switch between an image and video recording mode as with any conventional camera app. In addition, the app also offers the option of Live image directly on YouTube to stream. There are no comprehensive recording settings. in the Photo mode let the Exposure and the triggering time to adjust. Of the video mode also offers only one setting option for Exposure and resolution (960p or 1280p), To lend the recordings a bit of pep, stand overall 9 color filter ready to be put on the picture. Another feature is the "Beauty mode", which blurs the recording in 5 stages. An HDR mode is unfortunately not available. 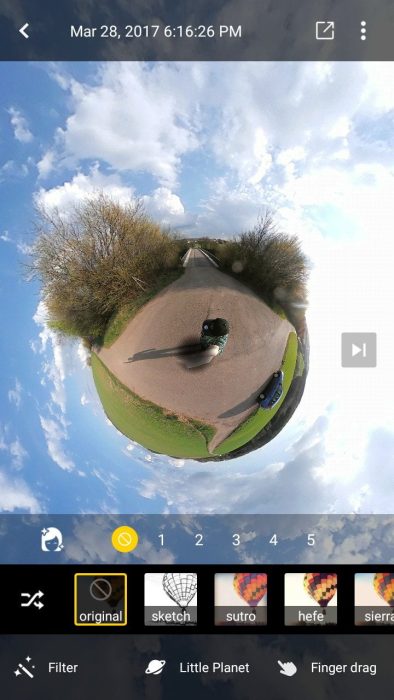 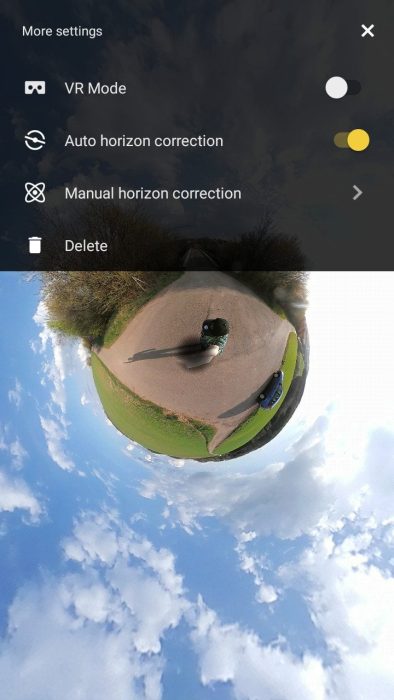 In terms of recording quality There are no miracles to be expected. Forcing an 360 degree image capture to just 3008 x 1504 pixels inevitably leads to a low degree of detail. In addition, the Insta360 Air is one of the "good weather cameras", which is why with increasingly poor lighting conditions, the details are lost and the image noise increases rapidly. Also, the color fastness is not perfect. Colors are particularly strong, but have a dominant shade of red. Excellent solution is the software-side joining of the two image sections. Insta360 has solved the composition of the images so well that a transition line is almost unrecognizable.

Even with video recordings, the Insta360 Air copes well and adds them mostly transition-free and fluid. To provide the recordings with sound, the camera uses the microphone of the connected smartphone or tablet.

Shooting will be in Format .insp (pictures) and .insv (videos) saved. Although these files can be opened with conventional image and video editing programs, you only get two adjacent circle images.

Edit and view the recordings are best directly from the app. The recordings can be edited in such a way that the softening beauty mode and the filters can also be applied later. To view the images, there are next to the "Default" mode, which represents the fish-eye effect image, another one "Perspective" modesmoothing the fish wake effect "Little Planet" mode, which represents the image as a spherical panorama, as well as the "Crystal Ball" modecreating a reversed sphere panorama. If you prefer to view your pictures through the VR glasses, Insta360 has one for you VR viewing mode integrated directly into the app. 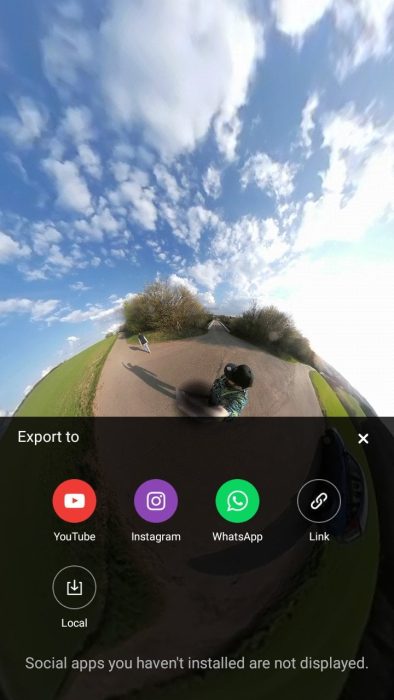 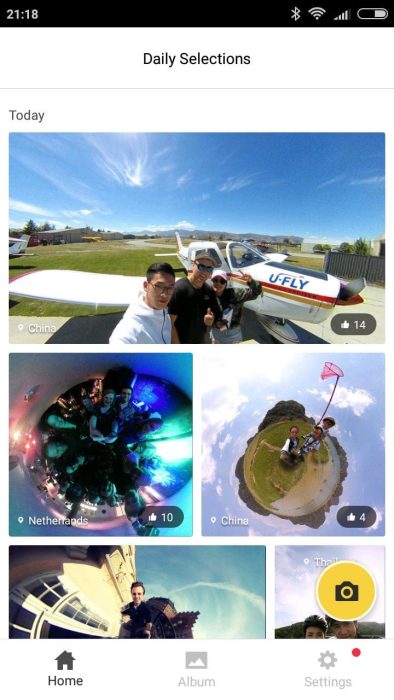 Export can the recordings in all social media, in the Insta360 cloud and also locally, where local storage is limited to image capture. If you save directly into the Insta360 Air Cloud, the matching panorama player is given the same, so that recordings can be viewed via your direct link without any additional software using all standard web browsers.

The first firmware update has been released. With the Version "m1.02_0001_PCBv1.00" became a Gyro stabilizer function added, which improves both video and image quality. Uneven movements during recording are now compensated much better. Also added was the 3K recording function for videos, This recording function is only supported by powerful smartphones. Occasionally it can come depending on the smartphone to breaks in the refresh rate. Another innovation is the so-called "Fringing", As a result, the often occurring image blurring is largely eliminated. The gallery has also been extended by a feature. It can be opened immediately animations via the Insta360 Air app.

Changelog according to Insta360:

Is Insta360 Air fun? Yes! Alone with the mobile design, it's just a blast to drag this little gadget out of your pocket and capture the environment in 360 degrees. The Insta360 Air app also instantly shots the shots taken in social media and can even be made permanently available in the Insta360 Cloud.

What spoils the joy is the connection solution that Insta360 has chosen. Contrary to the either-or principle, a combination of micro-USB and USB-C would have been desirable. The remedy is a small adapter, which is not included in the scope of delivery.

That is only for Android, or for iPhone?

Hi, yes the Air is mainly for Android devices. Insta360 introduces the "Nano" for iPhones.

Okay, thanks for the quick reply. With a Lightning on USB-C plug, I can not use synonymous?

No, the problem will be the app, which is only available for Android.