by Timo11th of June 2019
The Amazfit Nexo is a new Huami Smartwatch that does not want to be a pure sports wearable. As a smartwatch for everyday use, the Nexo comes in a stylish ceramic case, offers a circular 1.39 inch AMOLED display and has an integrated eSIM. There are also profound innovations in the health functions of the watch. A separately available ECG model detects cardiac arrhythmia at an early stage and warns the wearer of any abnormalities.
Overview
Manufacturer/Model

Huami's new smartwatch is named "Nexo" and has been released on 11. June officially presented in China. The smartwatch is available in two variants. The standard design without ECG function, 999 will cost yuan, which is the equivalent 128€ equivalent. The Model with ECG is from 1299 yuan or 166€ available. The Avengers Special Edition costs 1499 yuan or 191€, With a international sales start The Amazfit Nexo is expected in the coming weeks.

The Amazfit Nexo relies on a predominantly neutral designthat fits both casual and casual business dress. The simple watch case is made of particularly skin-friendly and scratch-resistant Zirconiaoxide, The weight is still pleasant 49g.

Depending on the model, the length-adjustable watchband made of silicone (standard version) or a combination of leather and silicone (ECG model). After Degree of protection IP68 Smartwatch is dustproof and waterproof. The Nexo while showering or even swimming is not recommended by Amazfit!

The display is of the type AMOLED and is characterized by a particularly strong color reproduction and an almost infinite contrast. At a Diagonal of 1.39 inches reaches the circular display 454 454 x pixels at Retina level (326 PPI). The protective glass consists of Corning Gorilla Glass 3 and is provided with a special anti-dirt coating. The so-called 2.5D Curved Cut ensures a visually rounded display edge.

In terms of connectivity, the smartwatch is with a LTE-enabled eSIM equipped, sat up Bluetooth 4.2 BLE and can per 2.4 GHz WiFi (802.11b / g / n) get connected. The Capacity of the battery is 420 mAh, The active life is about 28 hours. The loading time is Huami with 1.5 hours.

Although the processor was designed for Android Wear OS, the Amazfit Nexo runs the proprietary Amazfit OS, Although this is also based on Android, but does not allow the subsequent installation of Wear OS Apps. As a user you are bound to what Amazfit claims to be. 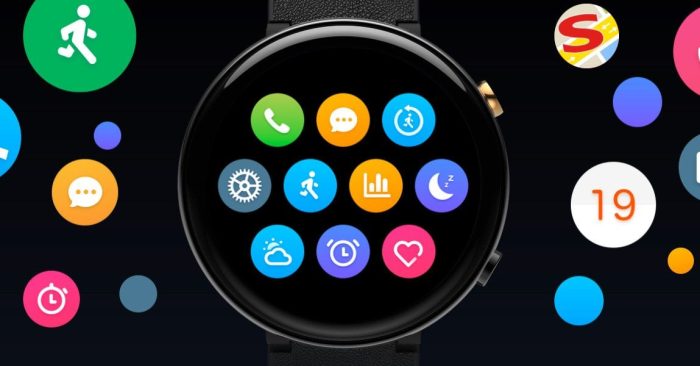 In addition to various sports and health features, Amazfit OS offers the possibility of detailed on the smartphone Calls or notifications to receive the Weather to display the Music playback to fix, to set the alarm or We Home To control products.

The Amazfit Nexo is equipped with a microphone. The carrier can make or make calls over it language assistants activate. The NFC module allows to pay by mobile (Alipay) or to load the public transport ticket on the clock. The integrated eSIM can connect to the 4G LTE mobile network regardless of the provider Telephoning is thus possible directly via the eSIM of the smartwatch, without having to connect to the smartphone.

Unfortunately, voice control, NFC and eSIM have a catch. These features were previously announced only for the Chinese market. To what extent the international model will contain similar features is not yet known. At least in voice control, Amazfit showed that global models can be equipped with a Western language assistant. As with the Amazfit Verge, will most likely be the Xiao AI instead Amazon Alexa Finding their way.

The Amazfit Nexo supports 10 various indoor and outdoor sports modes, The choices are:

The extensive sensors (GPS, accelerometer and G-sensor) capture accurate sports and position data. Depending on the sports profile can be about the Amazfit Watch App (or MiFit App) shows the route, the steps taken, and the calories burned.

To make the PPG heart rate measurement even more accurate, the Nexo uses a specially developed by Amazfit BioTracker PPG Sensor. The optical sensor not only reduces power consumption for full-time measurement, but is also directly interfaced with the PAI health assessment system. The separately available Amazfit Nexo ECG can record the heartbeat and heart rhythm using an electrical heart rate sensor. Irregularities such as atrial fibrillation are detected in real time and the wearer is notified.

So far, however, the Nexo is only available in China. When and with what functions the international model will appear remains to be seen. Experience has shown that Huami publishes the international equivalent a few weeks after the Chinese release. As soon as a test copy reaches us, the detailed test report follows.

Amazfit X - Smartwatch with curved display is coming!
look at