by Timo22. February 2017
The subsidiary "Honor", the Chinese smartphone giant "Huawei" has released the Honor 6X a mid-range smartphone that has much to offer in terms of features. Whether a purchase is worth it, more about this in this review!
Overview
Manufacturer/Model

First impression of the Honor 6X

The smartphone was thankfully for this review Honor provided.

The Honor 6X is available with a total of 3 different memory configurations. Besides the basic model with 3GB memory and 32GB internal memory, there is also one Premium model with 4GB memory and 64GB internal memory. Not available in this country, but available as a China import, there is that Honor 6X also as a mix between the two above models with a 4GB large RAM and a 32GB large internal memory. Regarding the case color can be between Gray, gold and silver choose. For this review, we have the basic model, which is available from 250 €, taken under the microscope.

The delivery contains no surprises. In addition to the smartphone are still a USB power adapter with matching micro-USB charging cable, a SIM needle to open the SIM slot and a user manual. 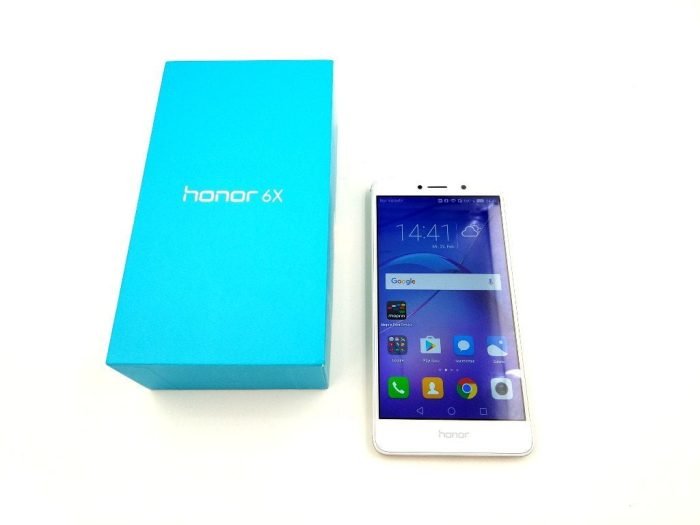 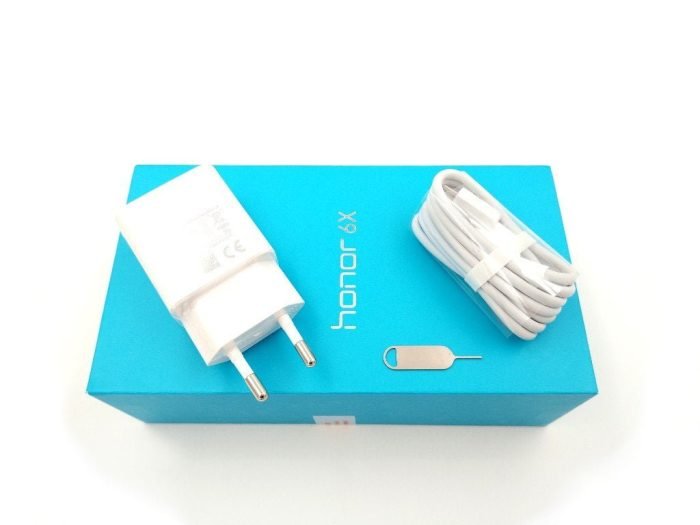 Flop in front, top in the back - this is how the design of the Honor 6X can be described in a few words. Front is especially the with 3.5 mm very large distance between display and housing frame (Bezel) to critisize. In addition, the smartphone only with virtual display buttons gets along. The area below the display could have been space-saving equipped with capacitive and illuminated control buttons - a pity. 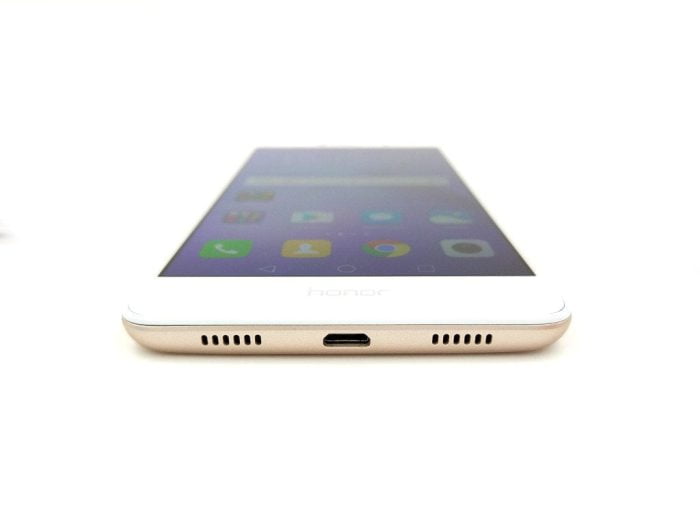 More interesting is the back of the Honor 6X. The metal unibody case gives the mid-range smartphone a much higher-quality feeling. Due to the slightly rounded edges of the case, the device sits neatly in the hand and the side buttons are easy to reach. Of course, for reception reasons, not the entire case back of metal. The upper and lower end are made of plastic, but adapts perfectly to the rest of the design.

The processing is the Honor 6X succeeded. The housing shows no processing defects, the gap dimensions of the individual housing parts are inconspicuous and the physical control buttons (power button and volume rocker) are firmly seated in the housing. 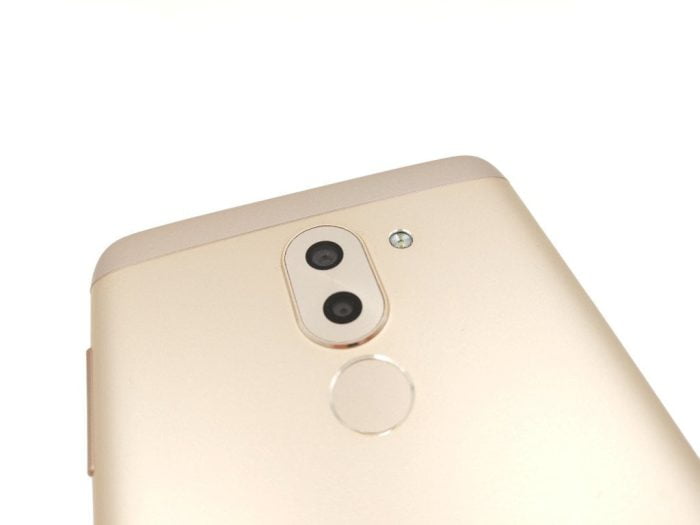 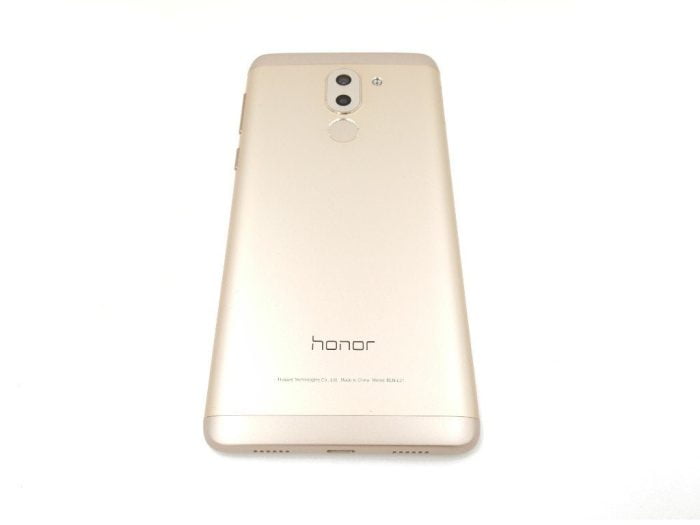 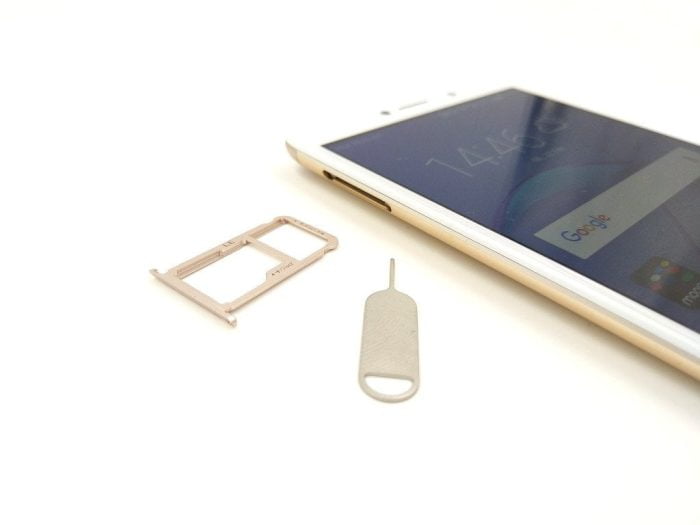 The Display of type IPS owns one Diagonal of 5.5 inches and dissolves in Full-HD (1920 x 1080) on. With the achieved Dot density of 403 PPI the image is razor-sharp. Overall, the display convinces by a high-contrast presentation with strong and warm colors. If you do not like the color temperature, you can choose between three predefined temperature profiles within the display settings or set the color temperature individually. In addition, the display settings offer a so-called "Visual comfort" mode in which blue light is filtered, which at the same time should prevent fatigue of the eyes.

With a Luminance of 450 nit On average, the Honor 6X's display shines brightly. Within the nearly three-week trial period, we had no problems reading the display even with (the fewest) sunshine. The viewing angle stability is excellent. Even from unusual viewing angles, no changes in presentation or readability are noticeable. The touchscreen supports a maximum of 10 simultaneous inputs. Inputs are precisely recognized and the Honor 6X was spared by so-called "Ghost Touches". 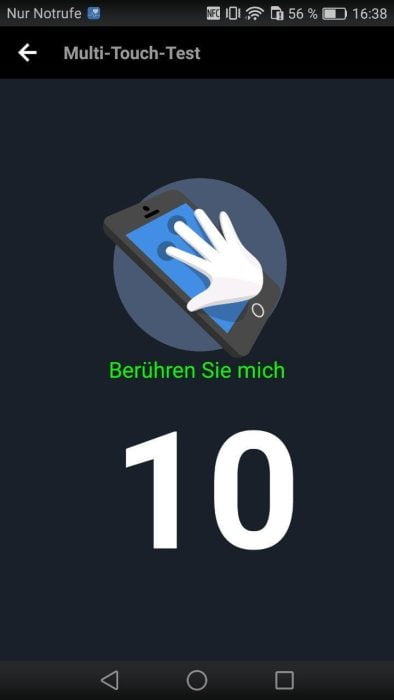 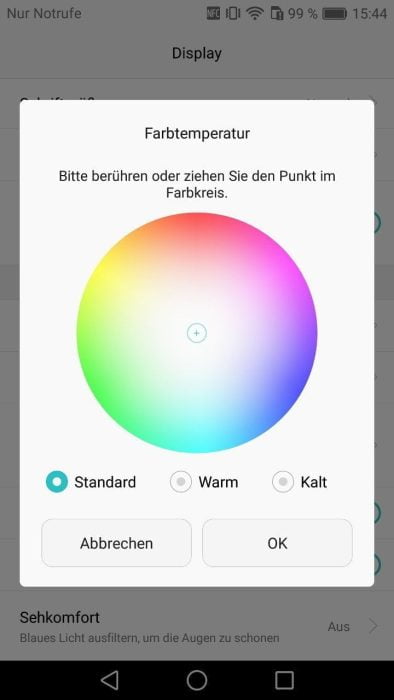 As with most Huawei and Honor smartphones, the Honor 6X is set to one HiSilicon ARM processor from your own home. The processor called Kirin 655 has in total 8 processor coresof which four of the cores clock with 2.1 GHz or 1.7 GHz. The processor graphics of the "System on Chip" are one Mali-T830 GPU, The memory equipment amounts to one with our test copy 3GB large RAM and a 32GB large internal memory, As already mentioned, the smartphone is also available with a higher storage capacity.

In terms of performance, the Honor 6X leaves nothing to be desired. Apps open in a timely manner and the user interface is extremely fluid. Even multitasking tasks pose no problem for the smartphone. Video streaming works perfectly and even with one or the other, not too demanding game, the smartphone copes well. 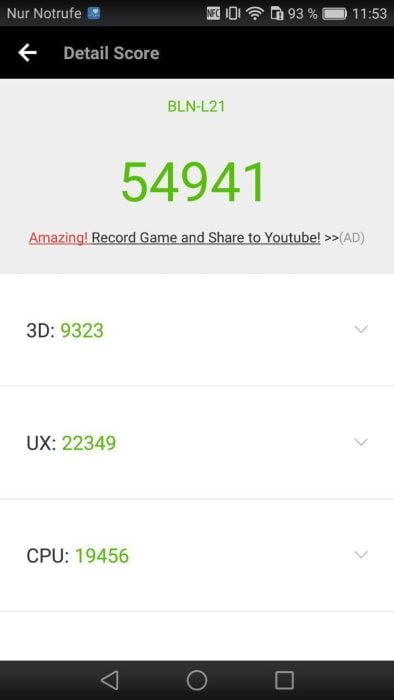 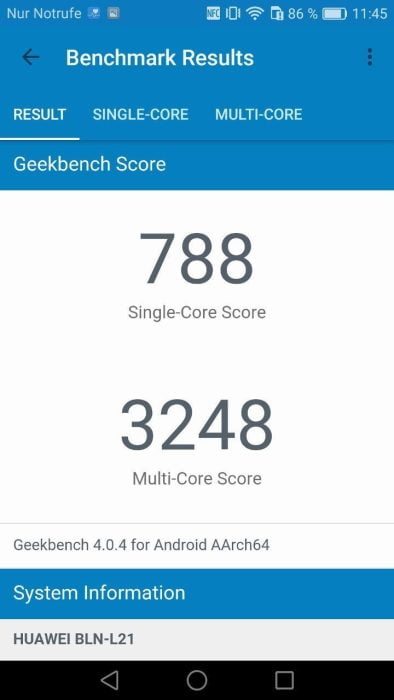 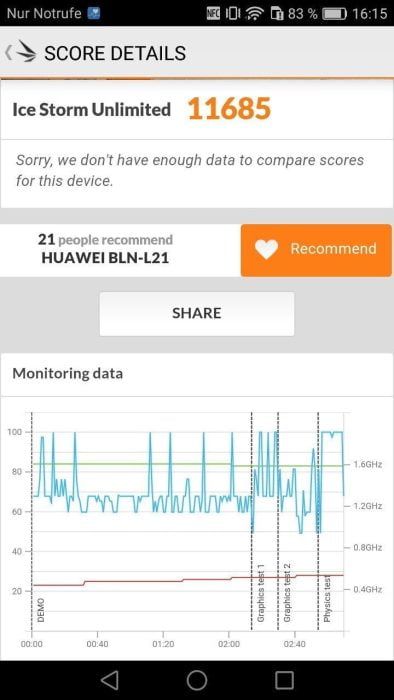 On the smartphone Huawei finds its own Emotion UI (short EMUI) in the version 4.1. Feeder. Although EMUI 4.1 is based on Android 6.0, it does not have much in common with a clean stick Android, as we know it from Google. At the same time, EMUI extends the smartphone with interesting functions that can only be realized with additional apps on conventional stick-and-go Android devices. As a result, the system also looks bloated and confusing at first glance.

Especially to the numerous pre-installed third-party apps you can disturb yourself. In addition to apps from TripAdvisor, Booking and others, just about every social media app is preinstalled. These apps can of course be uninstalled later, but who wants a smartphone that occurs after the first launch like a Werbeschleuder!

If one connects the Smartphone with the PC, it is not recognized like most smartphones of other manufacturers as a media device, but one is called the "HiSuite" to install. It's about one Software for managing or synchronizing the files between smartphone and PC. Especially if you only want to copy pictures or music from or to the smartphone, the way through the HiSuite software is extremely cumbersome. 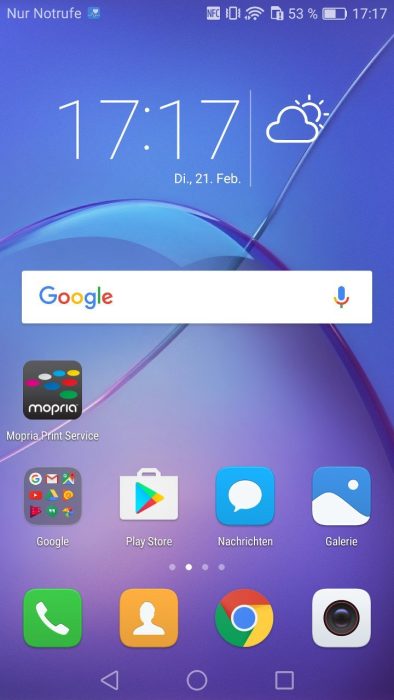 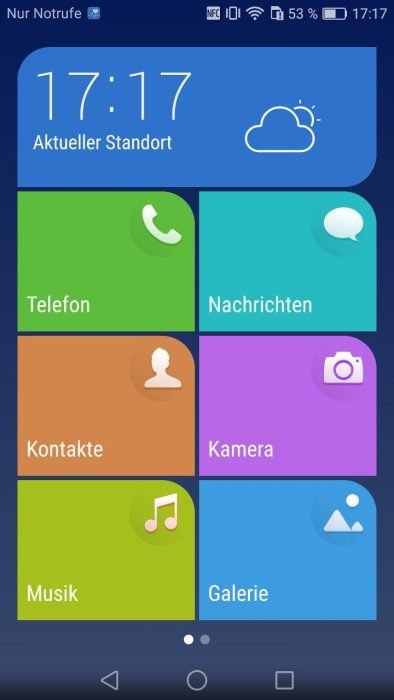 Dual camera systems with color sensor and additional black and white image sensor are currently very much in vogue. To find such a combination in a middle-class smartphone is rather unusual. Nevertheless, the Honor 6X offers just such a main camera. Of the RGB color sensor (Sony IMX386) solve with 12 Megapixel on. The additional 2 megapixel black and white sensor ensures the certain Focus and also makes it possible to change the focus later on. The front camera resolves with 8 megapixels.

The recording quality of the main camera convinced. Especially in good light conditions, crisp, sharp images with strong color reproduction and barely perceptible image noise are produced. Only in poorer lighting conditions and indoors are the recordings becoming increasingly noisy. In addition, it will be harder to take sharp pictures. Due to the slight delay of the triggering time, image recordings on the smallest movements visibly blur and details are lost. Videos takes the main camera in Full HD at 30 pictures-per-second.

An interesting feature is the Large aperture modewith which the so-called "Bokeh" effect can generate. As a result, the image background can be made sharper or blurrier on the software side, whereby lenses or people in the foreground are emphasized even more clearly. You can choose between different ones Fades from f / 0.95 to f / 16 rich. If you have taken a picture in this mode, you can also subsequently edit the shot picture with the artificial aperture. Unfortunately, this function only works at the expense of the resolution. Shooting in the "Large Aperture" mode is maximally recorded with 8 megapixels.

Considering that this is a mid-range smartphone, the Honor 6X has built a convincing main camera that can even compete with one or the other more expensive smartphone model. 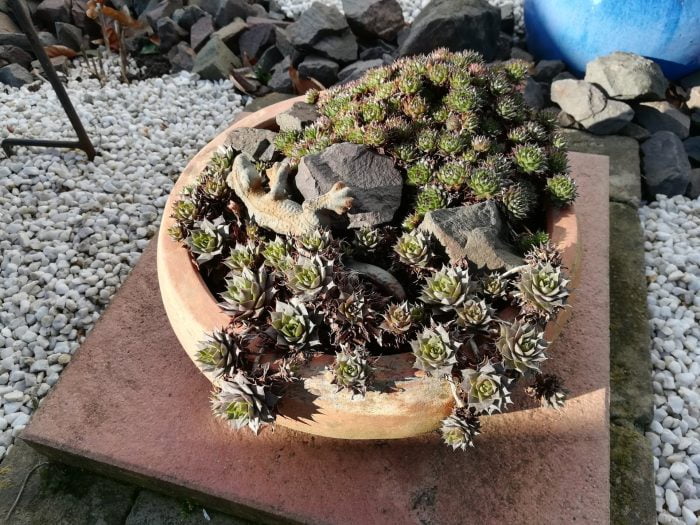 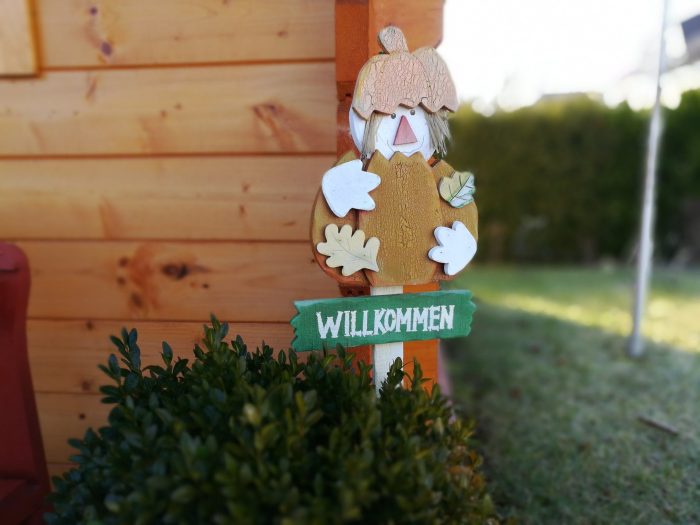 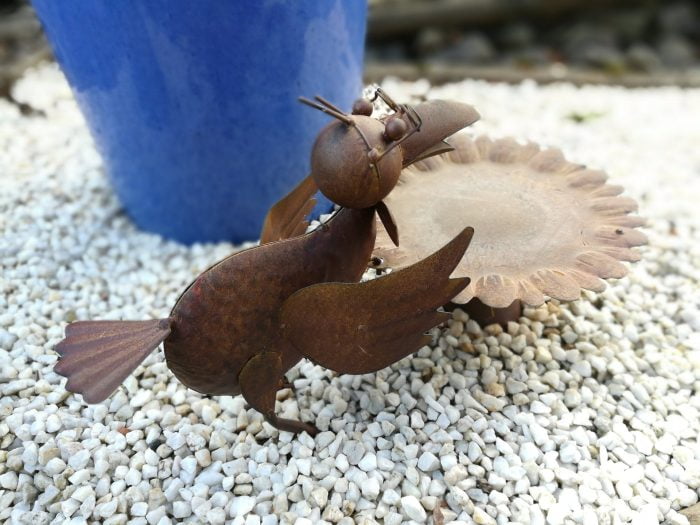 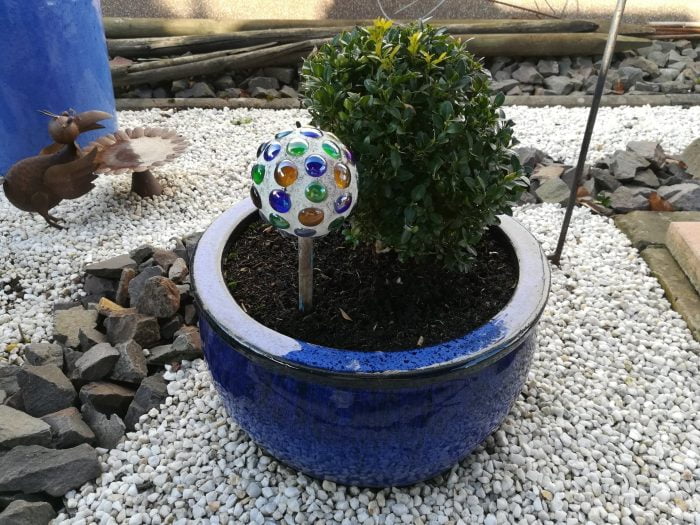 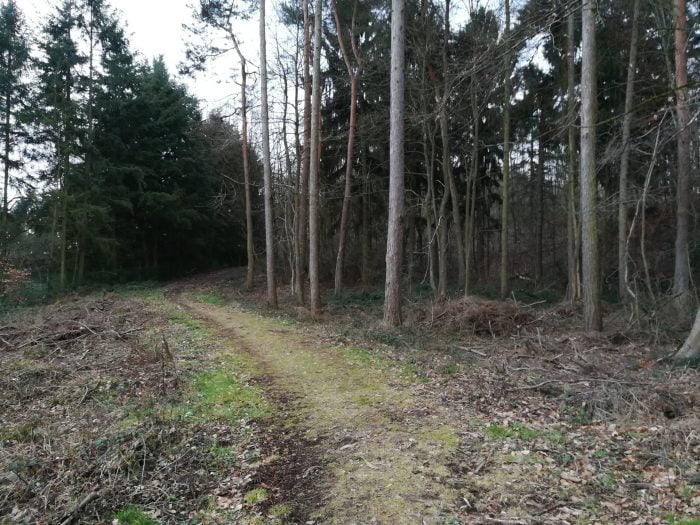 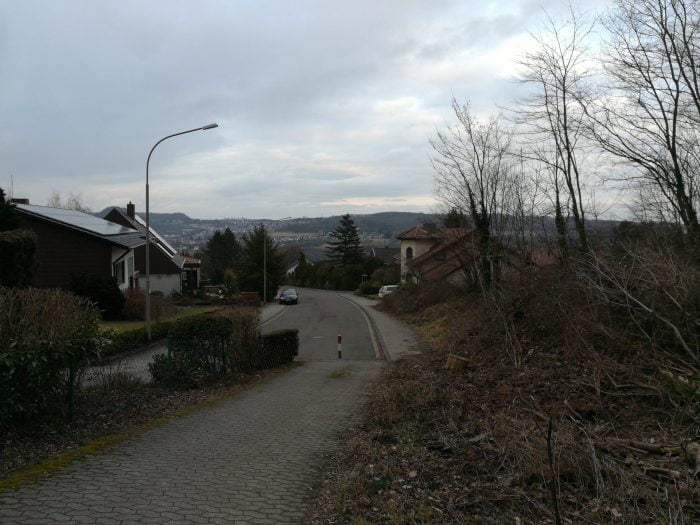 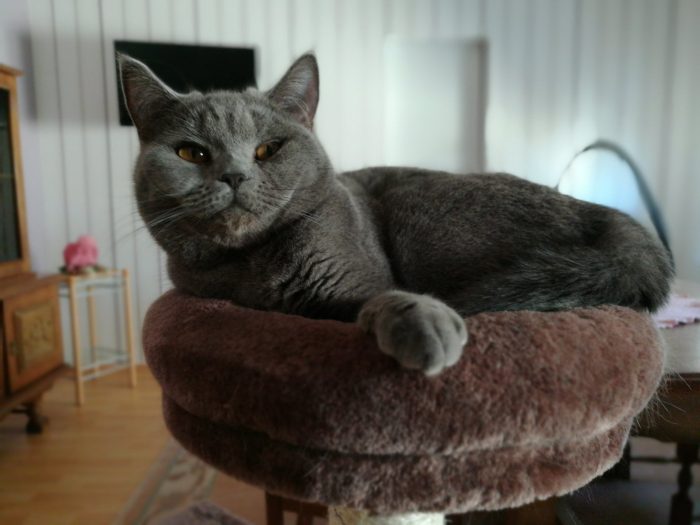 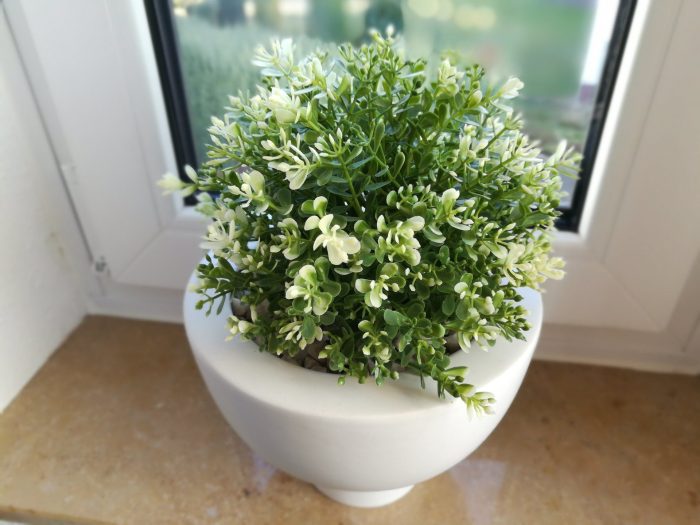 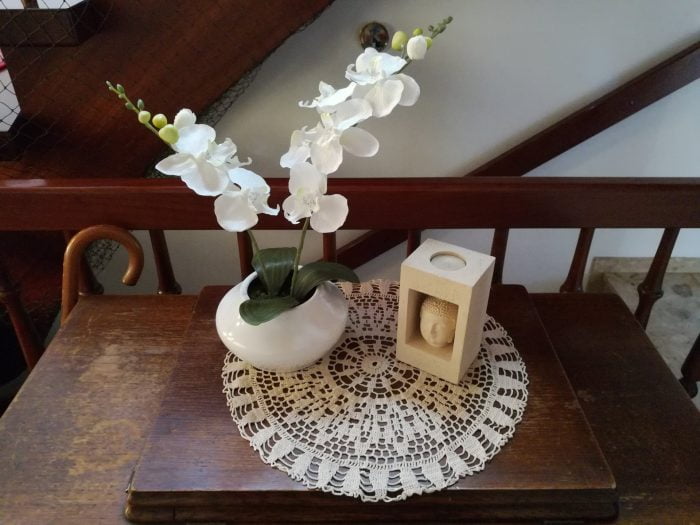 The recording quality of the 8 megapixel front camera is not objectionable. In addition to image and video recordings, there are also different "Schönheitsmodi"who rework the shot recordings artificially. Videos takes the front camera with maximum 720p resolution. 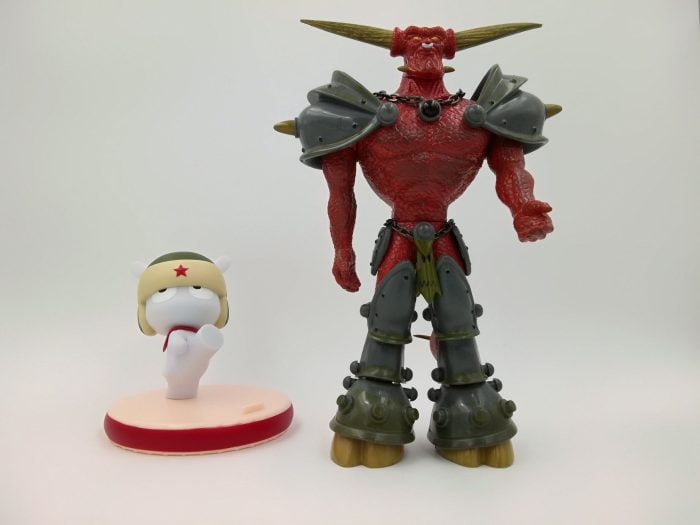 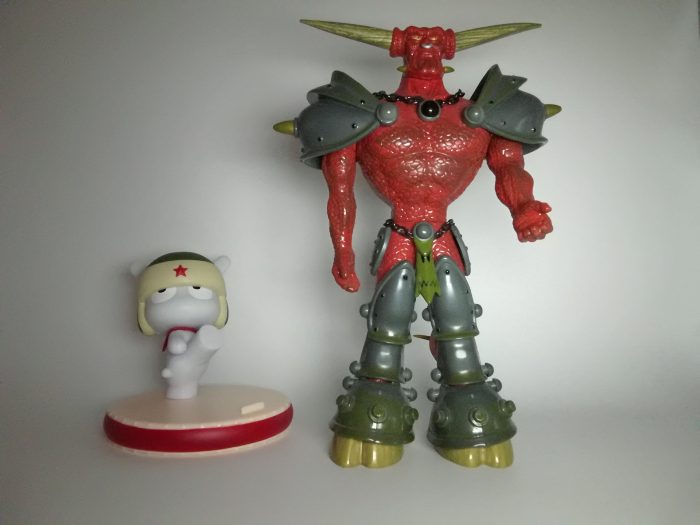 The EMUI Camera App is clearly arranged and offers numerous functions and setting options. There are, among others Live Picture Effects, which can be similar to an Instagram filter on the picture, but there are also special recording modes, such as a night mode or manual recording mode. 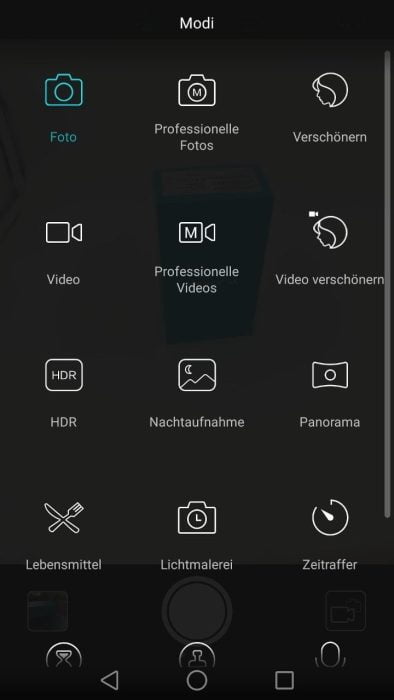 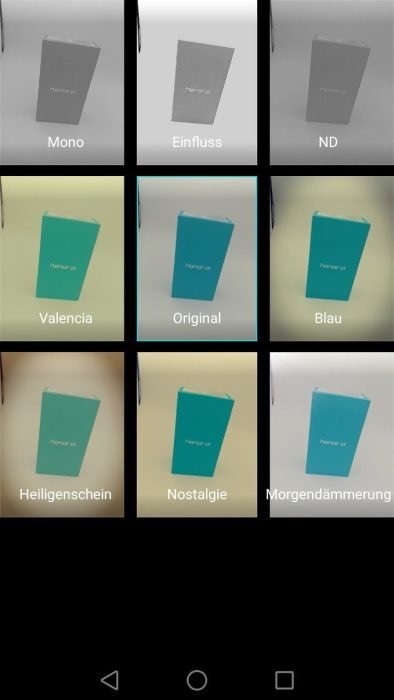 Only a few seconds pass before the Honor 6X finds a GPS fix. Positioning with the smartphone is accurate. Navigation is also precise and thanks to the additional e-compass, navigation is also possible on foot.

The sensory equipment is average. In addition to the above E-Compass there is one more Accelerometer, a proximity sensor, a brightness sensor and a gyroscope.

On the back is a Fingerprint scannerwith which the smartphone can be unlocked. The unlock time is not overwhelmingly fast, but the fingerprint scanner of the Honor 6X convinces with the recognition rate. Even if the finger was not precisely positioned, the smartphone could be unlocked. Another feature is the Notification LED in the upper part of the housing front. The LED lights up in different colors and can be freely configured within the settings. 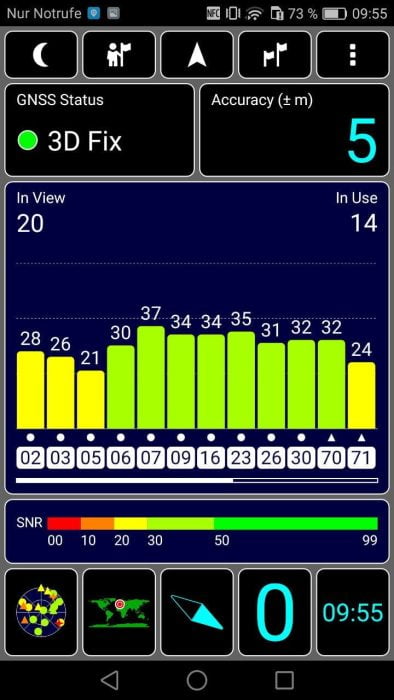 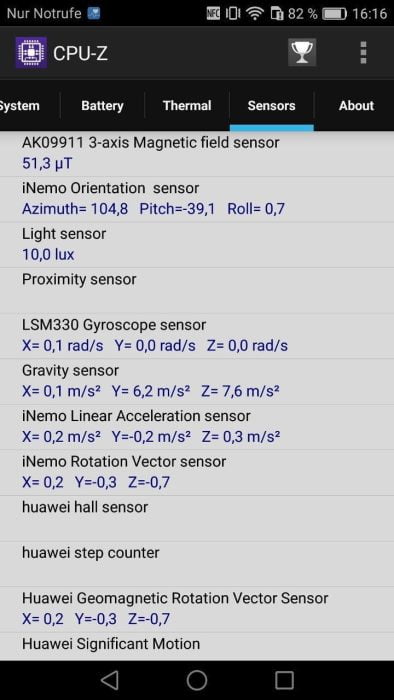 The smartphone is with a so-called "Hybrid Slot" fitted. This allows either the Use of two SIM cards (micro-SIM) or the use of only one SIM card with additional memory expansion using a MicroSD memory card. All standards of current mobile radio generations are supported. LTE is fully usable with this smartphone within Germany. The connection and voice quality within the mobile network is neat. In the test, the interlocutor was clearly understood and vice versa, the voice quality was not objected.

The Honor 6X also supports wireless transmission Bluetooth 4.1 and the WiFi standards 802.11 b / g / n, Unfortunately, the smartphone is not dual-band capable. The signal strength and transmission quality is on average good with both transmission types.

The capacity of the battery is Honor 3.340 mAh at. We were also able to understand this value with a multimeter. With the PCMark battery benchmark, the smartphone reaches a medium screen brightness Screen on time of 8 hours and 15 minutes, No outstanding value, but not bad either. In practice, it is good for the day. On the other hand, the advertised Quick-Charge function is more critical. It took 2 hours and 10 minutes to fully charge the smartphone. Under Quick-Charge we understand something else! 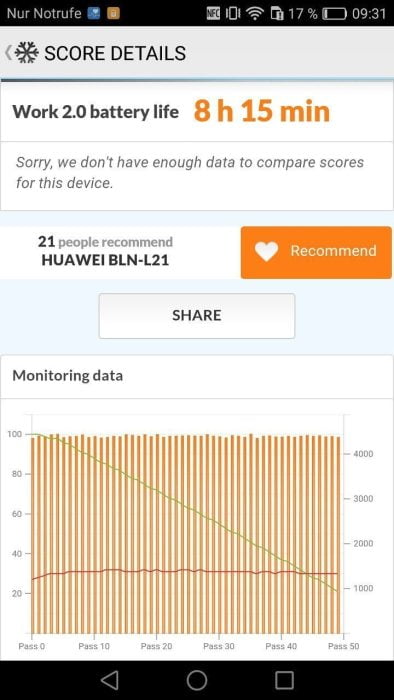 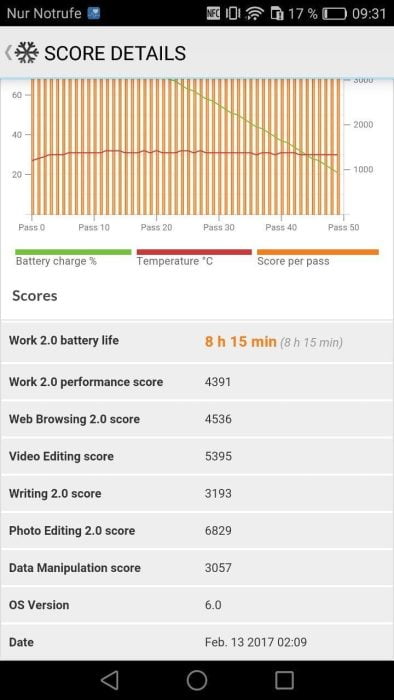 Is it worth buying an Honor 6X? Yes! For about 250 € you get a well-equipped middle-class smartphone, which not only beheaded in everyday life performant, but also with respect to the camera comparable middle-class smartphones wegsteckt. Of course, the Honor 6X has its quirks. First of all to criticize is EMUI 4.1 with its numerous third-party apps and the so-called HiSuite.