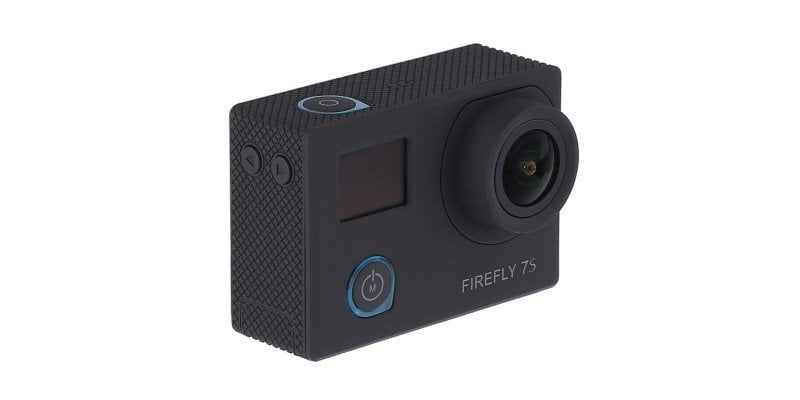 The Hawkeye Firefly 7S is the new model of the less well-known Action Cam series "Hawkeye", which can, however, with a good video and image quality and good implementation even with better known brands can match. Just the Hawkeye Firefly 6S, which does not require a display and thus has a low weight of only 70g, is extremely popular with quadrocopter pilots. The Hawkeye 7S, however, has a 2 inch LCD color display, where the weight has remained the same. How the cameras differ and with which cameras of other manufacturers the model 7S is comparable, we take a closer look in this preview. 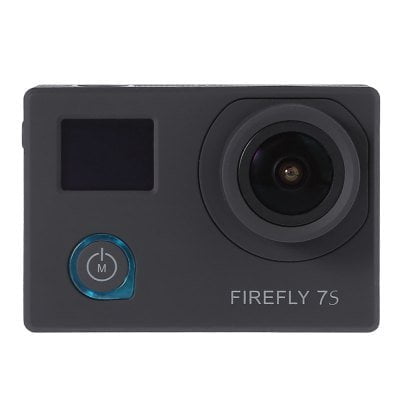 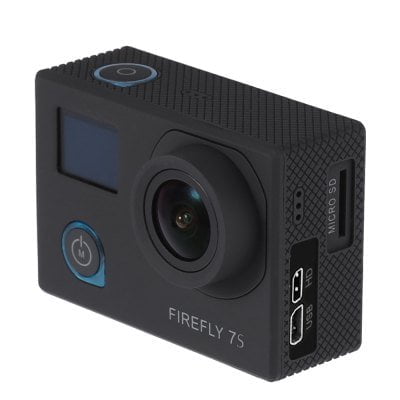 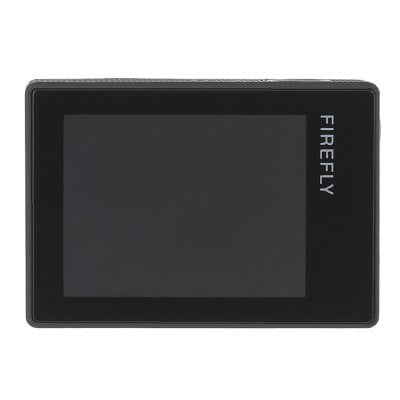 As already indicated, the Hawkeye Firefly 7S has one 2 inch LCD color display, which is located on the back of the case. The small front OLED display, which was already present on the Hawkeye 6S, was also retained in the successor. The size, as well as the weight of Action Cam has remained the same and continues to be 59 41 x x 21mm at a Weight of 70g, Thus, the camera is compatible with all common accessories of the GoPro Hero series, as well as the SJCAM series. 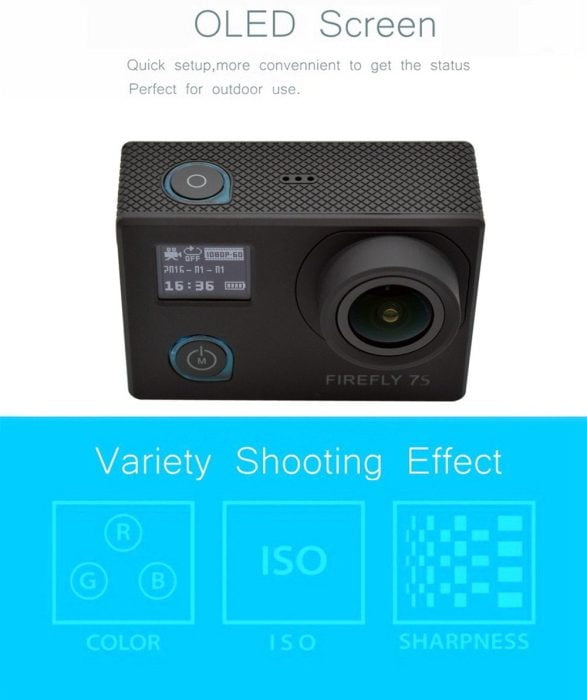 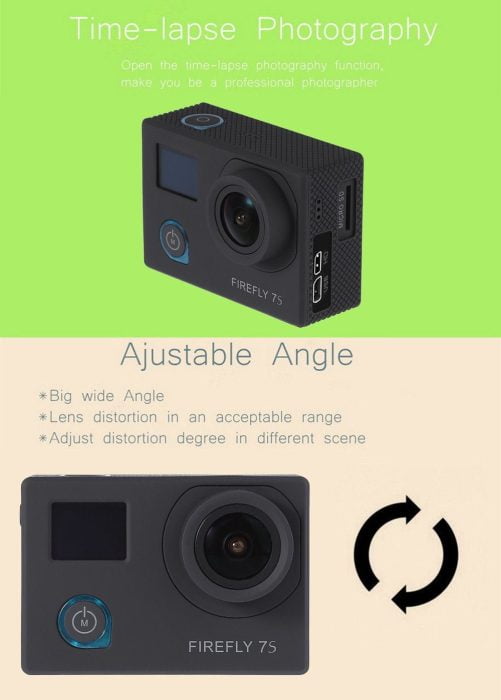 With regard to the installed hardware nothing has changed so far. It will continue to be Sony IMX078 image sensor used that natively with 12.4 Megapixel dissolves and also the image processor continues to amount to one Novatek 96660 chipset, Incidentally, this combination is also used by the SJCAM SJ5000X, which means that the video and image quality will be equally good. Note, however, that even a well-optimized firmware in terms of video and image quality plays a crucial role. Also the possible resolutions remained the same for the Firefly 7S. The maximum resolution is 4K at 24 images-per-second, On 1080p even 60 pictures per second are possible and on 720p rich 120 pictures per second. The viewing angle is 120 °.

To stabilize the video recordings, the Hawkeye 7S has a integrated gyroscope, causing the shots stabilized on the software side become. The connections located on the side of the housing amount to one mini USB socket for charging or for data transmission, as well mini HDMI socket, In addition, one is included A / V cable which allows video and audio signals to be transmitted through the USB socket. About the micro SD memory card slot memory cards can maximum 64GB be supplied.

Another interesting feature of the Hawkeye Firefly 7S is the Remote control via WiFi in combination with the Firefly app, This is available for Android, but also for Apple iOS. Already at its predecessor, the app was able to convince in various test reports by a clean transmission and a stately range of functions. In addition to a live image output, various settings, including resolution, the app also offers social media functions for sharing the shot taken. 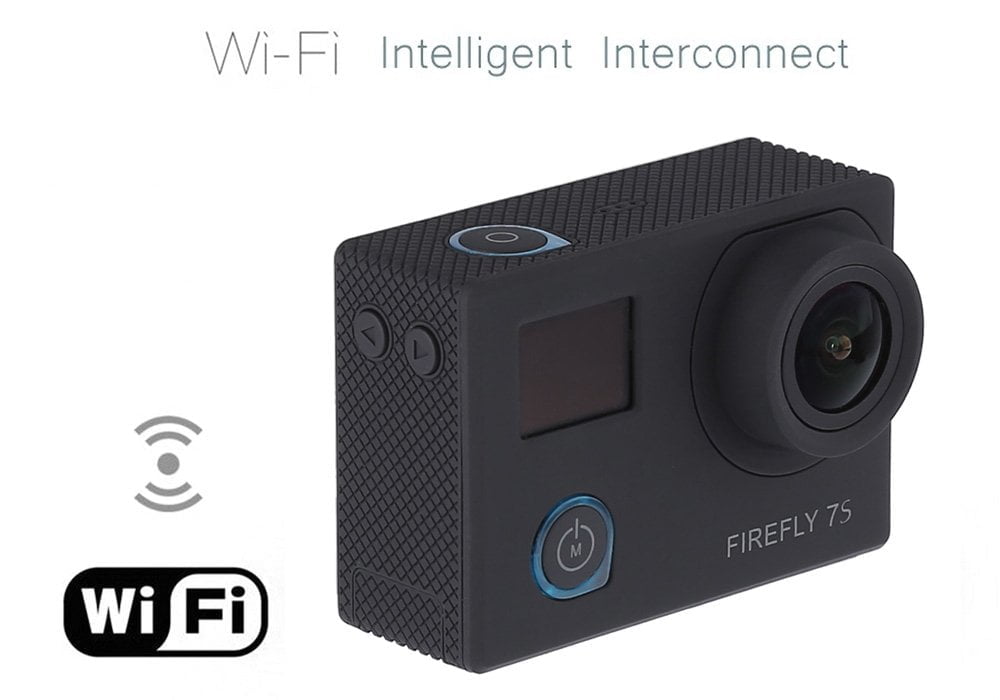 Biggest disadvantage of the Firefly 7S in the direct comparison with the Firefly 6S, is the reduced size of the battery, The predecessor still used 1600mAh large batteries, where a running time of 70-90 minutes, depending on the resolution, seemed quite realistic. The successor, however, starts 1050mAh large batteries, Due to the additional LCD display, it can be assumed that the running time will be shortened accordingly. With a resolution of 4K and active display is expected to run for about 50 minutes. A precise battery life will be comprehensible only with the appearance of first reviews of the Hawkeye Firefly 7S.

I still have the old Firefly 6S and that's just perfect for my quadrocopter! I will change whrsl. not if nothing has changed on the processor, but anyone looking for a light cam is served with the super!