by Timo6. October 2017
GamePad Digital (GPD) is a manufacturer that wants to conquer the market, especially with niche products. After releasing the Windows 10 GPD WIN handheld console just last year, GPD has a compact 7 inch laptop - the "GPD Pocket" - packaged this year. For this review, I've tested the Pocket PC for several weeks in everyday life.
Overview
Manufacturer/Model

First impression of the GPD Pocket

The Scope of delivery of the GPD Pocket Hardly different from the scope of delivery of a conventional smartphone. Contained are next to the Pocket PC yet another Screen Protector, charger with USB-C socket and NEMA-1 plug (5V 3A - 9V 2.67A - 12V - 2A), one USB-C to USB-C cable as well as a Chinese Manual. 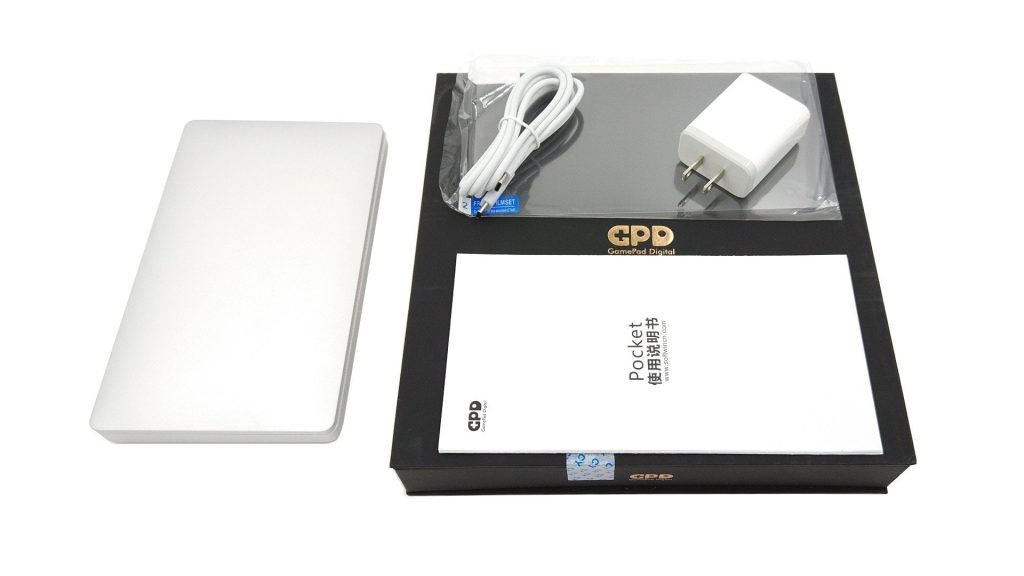 The GPD Pocket understands itself as a laptop for the trouser pocket, which is intended above all for the traveling business user and mobile ITler. The dimensions of the Aluminum housing are at one Length of 18 cmto Depth of 10.6 cm and a Height or thickness of 1.85 cm. Das Weight: is just once 503g. 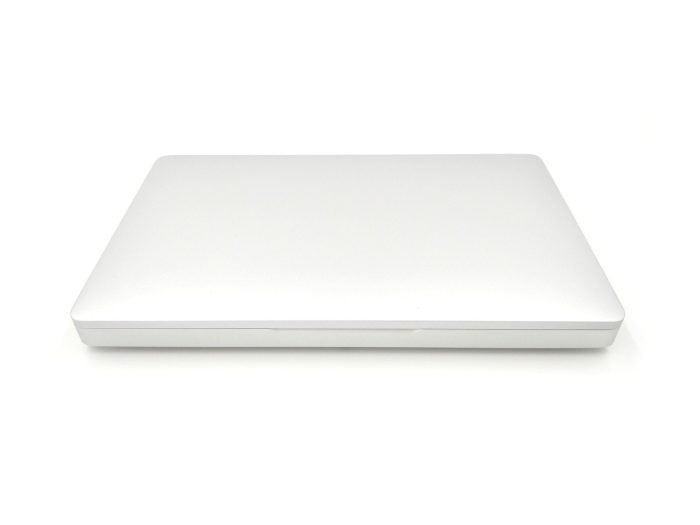 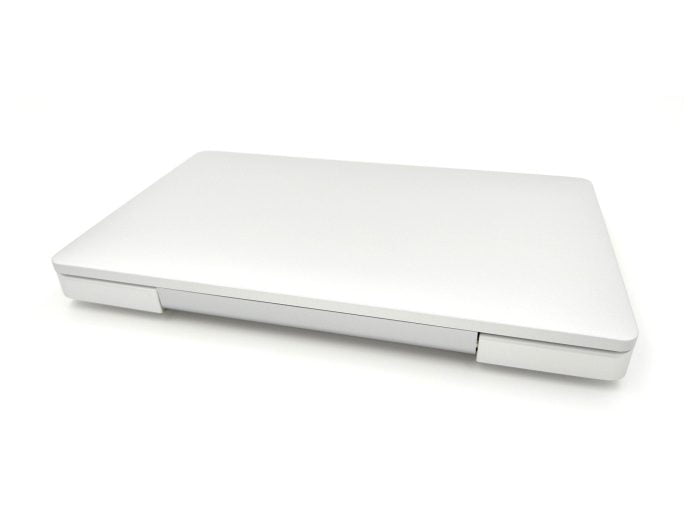 The connection options are all located on the right side of the case and amount to a multi-functional USB-C socket, a Micro HDMI socket, a 3.5m jack audio connection and a USB 3.0 type-A socket. Personally missing I have an additional Micro-SD memory card slot. Also on the right side of the housing is a fan grille, because the system is not passive, but actively cooled! Four little ones rubber feet, which are located in the respective corners of the housing bottom, ensure a stable stand.

Interesting is also the Keyboard (US layout) of the GPD laptop. Despite the compact housing, the most important keys and function keys are available. Mouse movements are not recorded via a trackpad, but via a pointer. The functionality of the pointer is similar to the TrackPoint of the Lenovo ThinkPad series.

The quality of workmanship the GPD Pocket is straightforward. The housing is made faultless and the connections are tight. The display hinge opens cleanly, with a pleasant resistance. The glass-protected display, the keyboard and the little blue pointer also leave a high-quality impression. 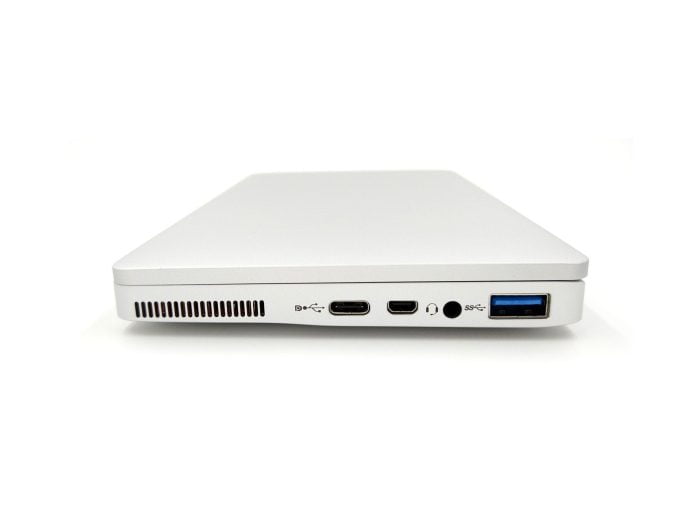 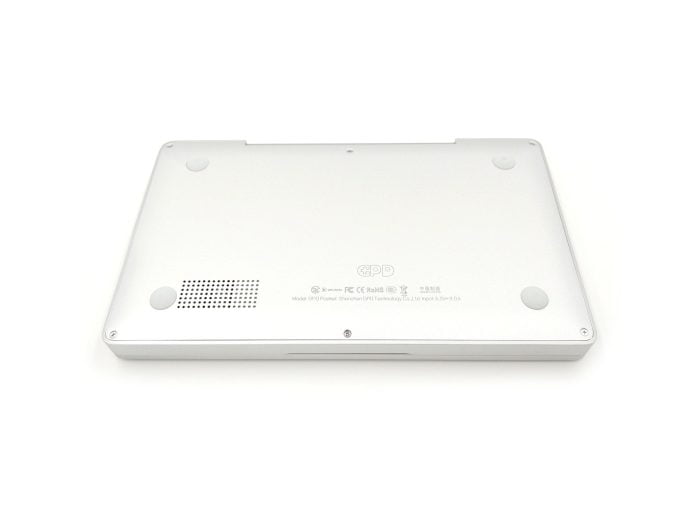 Despite the compact design, the Keyboard of the GPD Pocket out of total 84 buttons, The keyboard is doing after US-American layout occupied. For space-saving reasons, numerous keys have been made considerably more compact and moved closer to each other. The first attempts to write with the GPD Pocket are therefore a bit hard to get used to. However, once you get used to the compact and US-American layout, it's no problem to write smaller texts with the Pocket PC, without constantly looking for the keys. However, you will not break a speed record and you should not be prepared for a fluent 10 fingerprint. The typing feeling is particularly positive. Keystrokes feel comfortable and are barely audible. But I missed one keyboard lightthat would have made working in the dark much easier.

Mouse movements are over a trackpad, over a trackPoint controlled. As the name suggests, this is a small pressure-sensitive point that moves more or less joystick-like in all directions. The mouse speed is controlled by the pressure intensity. A reinvention, however, is not the way the trackpoint works. Anyone familiar with the Lenovo ThinkPad series will also recognize the trackpoint!

In practice, the trackpoint control also proves to be getting used to. You have a good grip on the blue rubber cap and can precisely control the mouse pointer, but the speed and ease of a mouse can not be approached. Nevertheless, the trackpoint is sufficient to master everyday tasks. If you can not handle it at all, it is not a problem to connect a mouse or operate the Pocket PC via the touch screen of the display.

Roughly speaking, the GPD Pocket is a tablet with a fixed keyboard. The display of the type IPS dissolves at a diagonal of 7 inches in Full HD (1920 x 1080 pixels) and is equipped with a 5 finger multitouch touch screen. GPD uses Corning Gorilla Glass 3 for display protection.

The sharpness and color fastness of the fully laminated display is excellent. Due to the high dot density of 323 PPI, individual pixels can not be seen at a normal working distance. The color display is neither too full nor too pale. The display can also score with respect to the Viewing angles, If you look diagonally on the display, the sharpness and the color representation are retained. Unevenly lit display areas did not exist in the copy I tested. There are criticisms regarding the display brightness, Especially outdoors and in strong sunshine, the display with maximum brightness setting is difficult to read. On the one hand, the display lacks luminance, while the display glass reflects at the same time.

The Touchscreen is also a good figure. Entries are precisely recognized and there are no complaints regarding the reaction time. The only noticeable ones are the less smooth surface and the susceptibility to fingerprints. 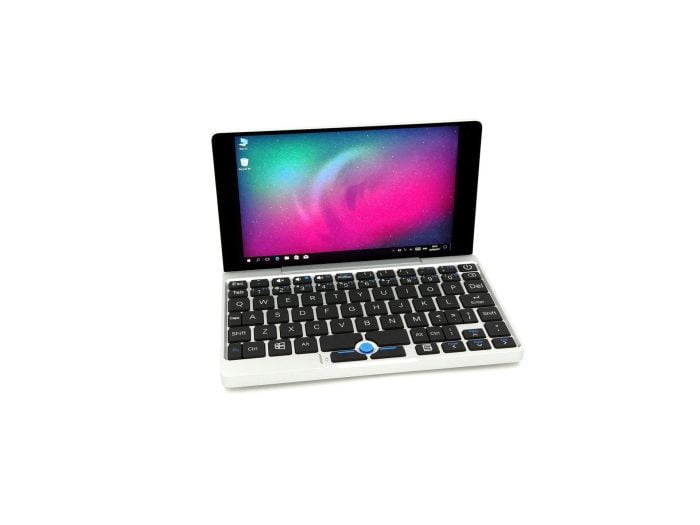 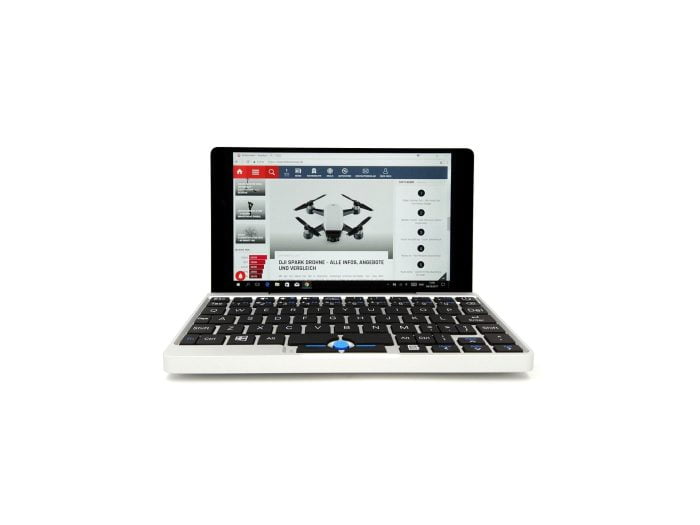 Ex works is already activated Windows 10 Home 64 bit preinstalled. The manufacturer also attaches a suitable license key. This is located on the packaging in which the device is delivered. The pre-installed Windows 10 is ready to use right from the first start. All drivers are already preinstalled. Alternatively, it is also possible different Linux distributions to install on the GPD Pocket. Community projects and instructions can be found on the net.

The built-in Processor  is a Intel Atom X7-Z8750who is already in GPD WIN was installed. This 14-engineered processor, introduced at the beginning of 2016, offers a total of 4 processor cores that clock with 1.6 GHz and reach a maximum clock rate of 2.56 GHz in the burst. The processor is cooled by a active fan cooling system. processor graphics is a Intel HD 405 Although theoretically able to cope with 4K or H.265 video material, it is less suitable for playing.

Main application area of ​​the GPD Pocket are Office applications. Some console work, image editing and web browsing are no problem for the Pocket PC. Even high-resolution YouTube videos, the device plays without image collapses. Challenging tasks such as video editing and gaming are hardly conceivable. Playing current game titles on the device is not possible. Again, it works well as a streaming PC. HEVC encoded video material to other devices to work easily.

The storage facilities amounts to one 8GB large LPDDR3 memory and one 128GB eMMC5.1 memory, A memory expansion via SD memory card is not possible, as already mentioned. In addition, the internal memory can not be exchanged. Due to the very large memory Multitasking tasks pose no problem for the GPD Pocket dar. The memory speed the internal eMMC memory could be better. The test achieved a moderate read speed of 142 MB / s and a write speed of 89 MB / s. Also the RAM clock does not keep what GPD promises. According to GPD, the RAM clock should be 1600 MHz. In fact, this is at 1066 MHz. A subsequent raising of the clock is only possible by flashing a modified BIOS (Link). 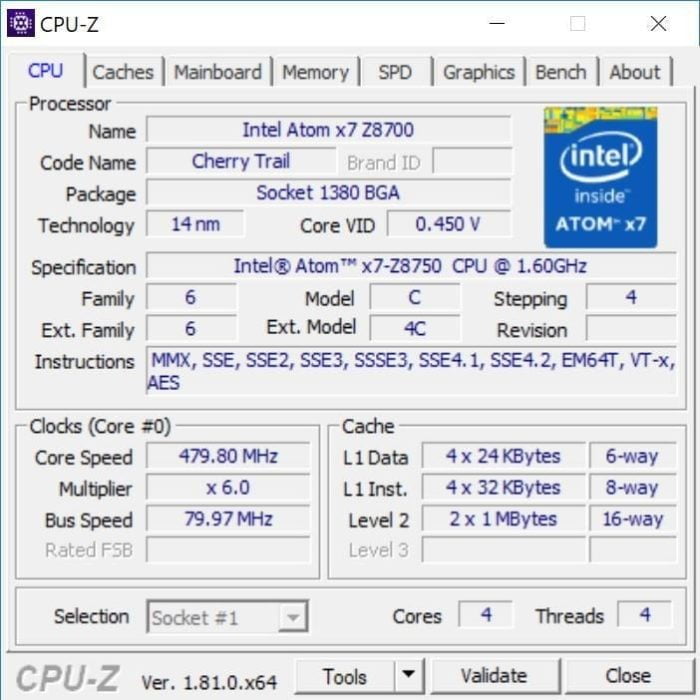 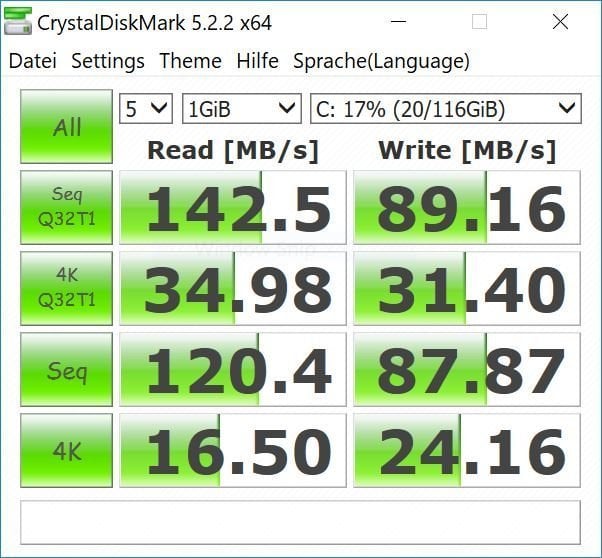 The surprise was positive cooling capacity of the active cooling system. Air is sucked in through the bottom, passed through a heat pipe and discharged to the side. In idle, the core temperature was at average 36 ° C. Under permanent full load, a maximum temperature of 74 ° C was reached. Even the highest speed, the volume of the fan is still acceptable. But that is far from satisfactory "Thermal Throttling"which already hits at mild 68 ° C and reduces processor performance. This is due to the aggressive Intel DPTF settings in the BIOS. One solution to the problem is flashing a modified BIOS! 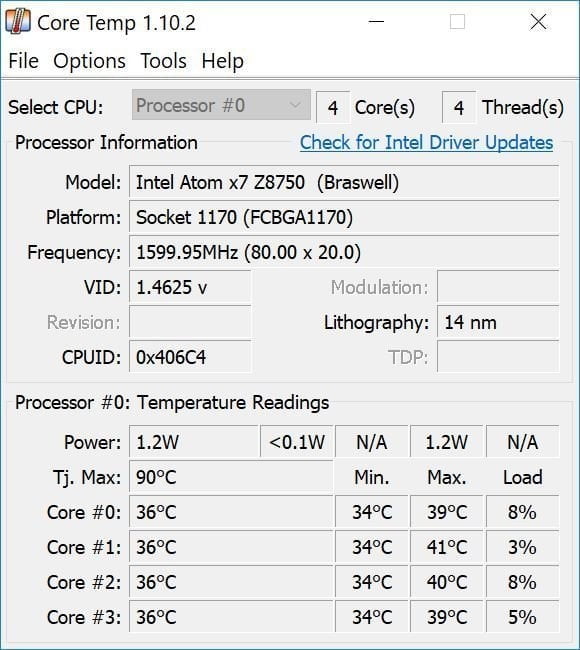 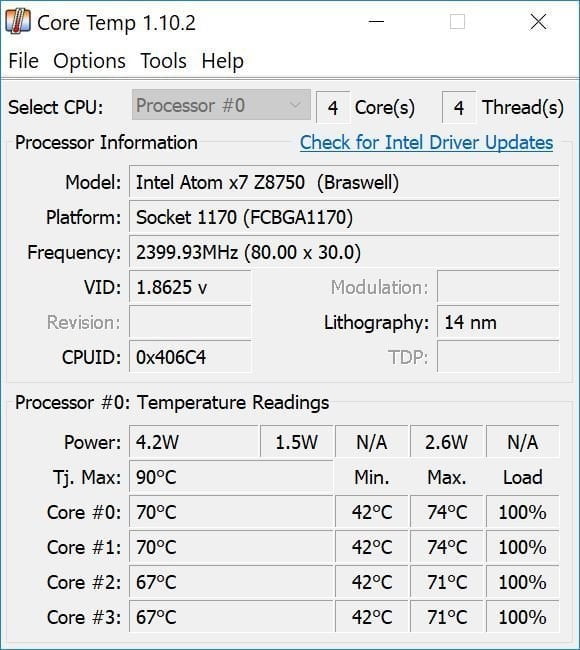 Im Wifi the mini laptop supports the Protocols 802.11a / b / g / n / ac and can therefore be operated both in the 2.4 GHz and 5 GHz network. Bluetooth is in the version 4.1 to disposal. In WLAN, the GPD Pocket behaves on average good. The signal remains constant over a longer distance and also the data throughput remains in a reasonable, if not outstanding, frame. When connecting with Bluetooth devices, there were no abnormalities. Sensitive is the device with a G-Sensor and a Hall encoder equipped.

The Klang The Pocket PC generates by a discreet, concealed under the keyboard Stereo speakers, The loudspeaker is powered by one Realtek ALC5645 chip, The sound quality is good according to the size of the device, which is why the GPD Pocket is also suitable for spontaneous film viewing or listening to music. A sound talent with rich bass is not to be expected. In addition, the speaker tends to overdrive at high volume.

A no-go is the 3.5mm audio port. In the test it was not possible even after a number of new installations of the audio driver to produce a trouble-free sound. If you connect a headphone, the sound is initially free of errors. However, if you start any audio file or watch a video on YouTube, the sound starts to distort and stutter. Other users on the net also report the problem. The cause is probably the software side.

The Capacity of the battery Gives GPD 7000 mAh at. The battery life achieved after several charge and discharge processes was on average at 6 hours. From the 12 hours given by GPD one is thus far away. A complete charge via the supplied charger takes about 4 hours. It is disturbing that even during charging the fan of the GPD Pocket becomes active and blows at full speed.

An 7 inch mini notebook is not a reinvention. Already since 2007 Asus distributed the mini-notebook series "Eee PC", which however 2010 was set again. In general, the mini-notebook faked a niche existence and could not prevail against the emerging tablets. Also the GPD Pocket is a niche product, which offers interesting application possibilities however because of the compact structure and the support of Windows as well as Linux, above all in the IT range.

However, a bitter aftertaste left the currently still high price and the numerous software blunders, which can be ironed out only with profound BIOS modifications. Anyone who likes extraordinary gadgets and knows how to get started with the device will surely enjoy the GPD Pocket. As a conventional consumer without computer skills, however, one should rather stay away from it.