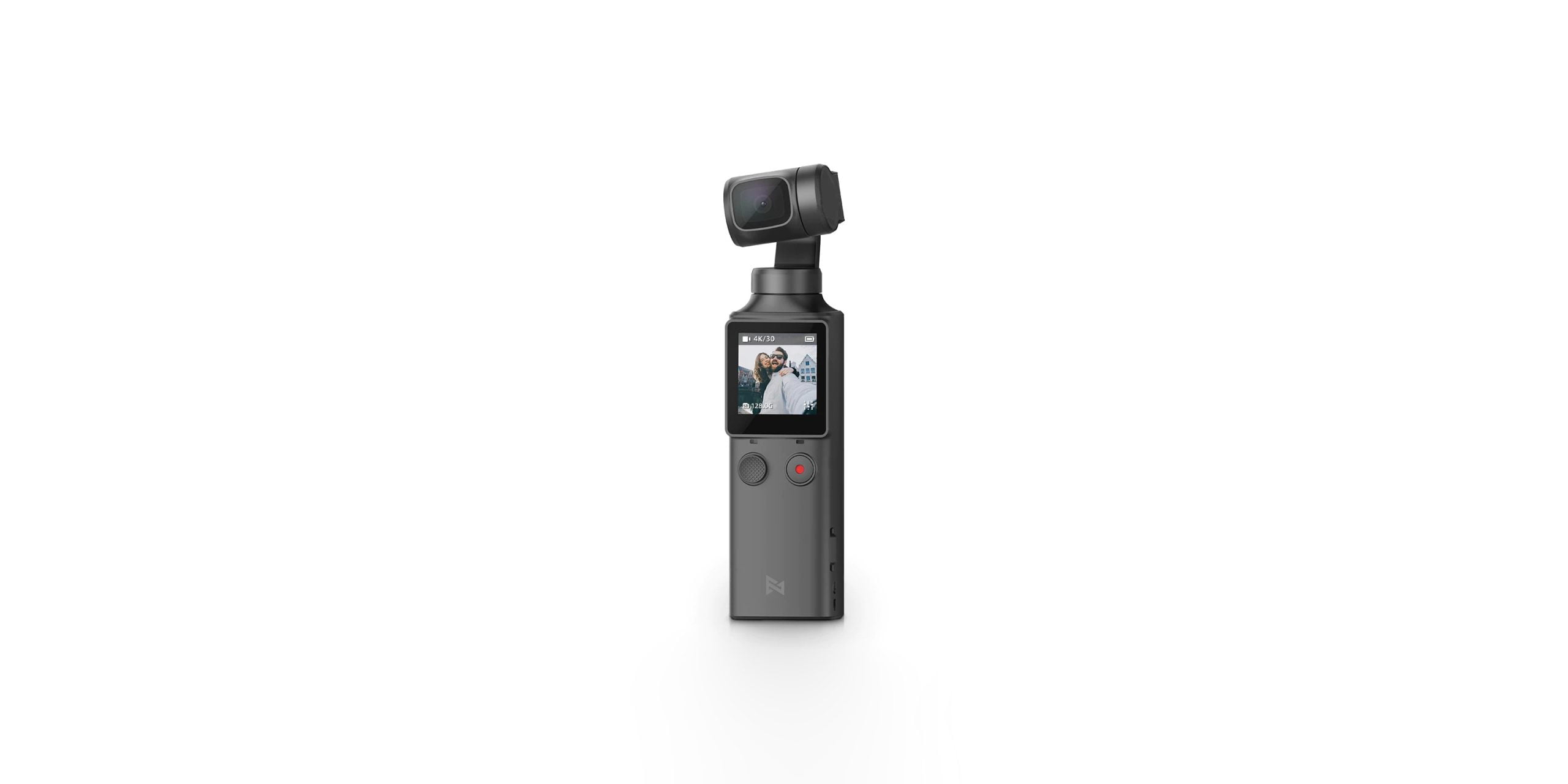 Copying, forging and optimizing are part of daily business in China. The Chinese manufacturers are now competing with each other so much that even products from their own ranks are copied down to the last detail. The FIMI Palm is a very good example of this. At first glance, the stabilized handheld camera could well pass as a DJI Osmo Pocket! By the way, FIMI is no stranger to it. The company specializing in cameras and drones is responsible, among other things, for the production of Xiaomi action cams and drones! 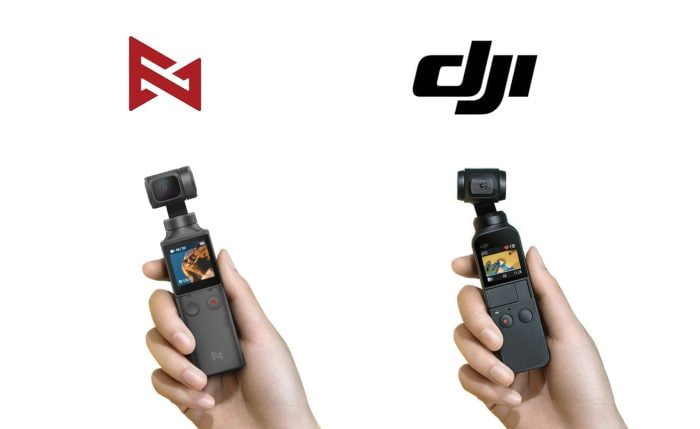 Even the hand is the same ?!

With dimensions of 127 x 22.7 x 30.5 mm and a weight of 120g, the handheld camera is astonishingly compact. In fact, so compact that the Palm is smaller and lighter than a conventional smartphone and easily fits in your pocket. The housing is made of plastic. A 1/4 inch thread on the back allows mounting on a tripod. Lanyard fans will also get their money's worth. On the side there is an inlet for attaching the hand strap. 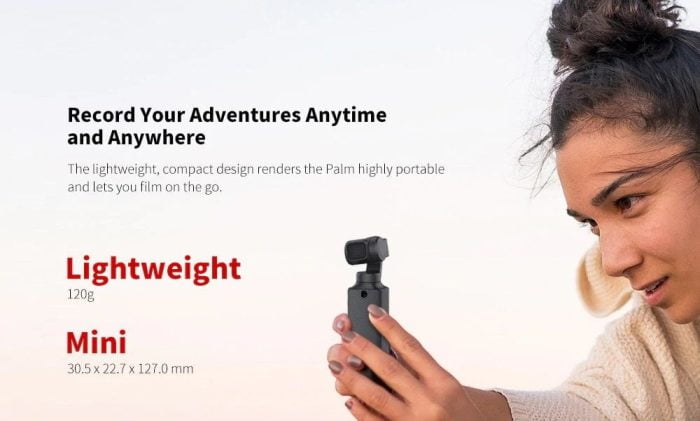 If you want to use the Palm on vacation and preferably in the sea, you should be careful! Like the Osmo Pocket, the Palm is unfortunately not waterproof. After all, FIMI is known for bringing separately available accessories onto the market, so that a waterproof case can be expected.

One way to control the gimbal is the 5-way joystick. In mode 1, the respective movements of the joystick control the 3-axes of the gimbal. In mode 2, which is activated by pressing the joystick button, the user has access to zoom and exposure functions.

In addition to the physical control buttons, the FIMI Palm is equipped with a touch display. This resolves with a 1.22 inch display diagonal with 240 x 240 pixels. FIMI has not yet commented on the display technology used. It is known, however, that the display achieves a luminance of 600nit and should therefore remain readable even in strong light. 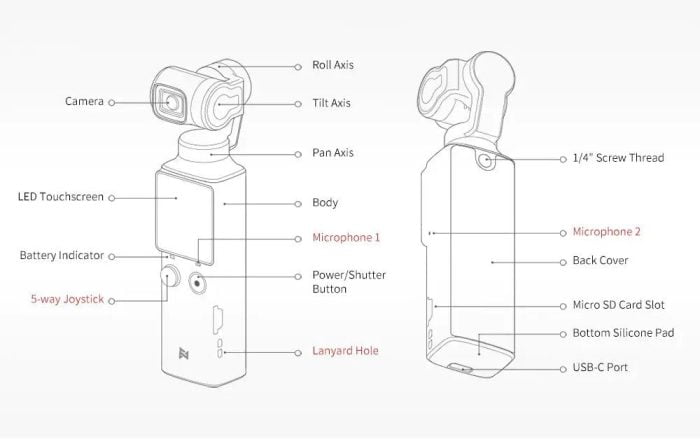 Last but not least, the gimbal can also be controlled using an app. Connected to the smartphone via Bluetooth or WiFi, you have access to all functions. Saved recordings can also be transferred from the inserted memory card to the connected device. The “Story Mode” integrated in the app helps with the subsequent processing of the recordings and provides the user with various templates.

FIMI largely leaves us in the dark about the built-in camera sensor. It is known that the FIMI Palm is equipped with a 128 ° wide-angle camera that records a maximum of 4K at 30 frames per second. Recordings are encoded in HEVC at up to 100 Mbps. The sound is picked up by a front-facing microphone and a side microphone. An external microphone can be connected to the USB-C socket with the appropriate adapter. A microSD memory card is required to save the recordings. There is no internal data storage.

The video below shows how the handheld gimbal performs in the video test. Similar to an action cam, the sound is audibly muffled. The stabilization and recording quality make a good impression and correspond to what you can expect from a 180 € expensive camera + gimbal combi.

However, the FIMI Palm cannot match the quality of an Osmo Pocket! Especially in the dark, the recording quality drops rapidly. Sometimes the gimbal also has to struggle in particularly bright lighting situations, which ends in partially overexposed scenes. As soon as a test copy reaches us, the detailed test follows here!

What should not be missing, of course, are intelligent recording modes. These make it easier to use the gimbal without having to rework recordings later. The “Smart Tracking” mode enables people and objects to be kept fully automatically in the picture. This is particularly interesting for Vloger who want to keep themselves permanently in the picture.

There is a “Pitch Lock Mode”, “FPV Mode”, “Follow Mode” and an “All Locked Mode” specifically related to the control of the 3-axis of the gimbal. There are also gadgets such as timelapse, motionlapse, hyperlapse and panorama. 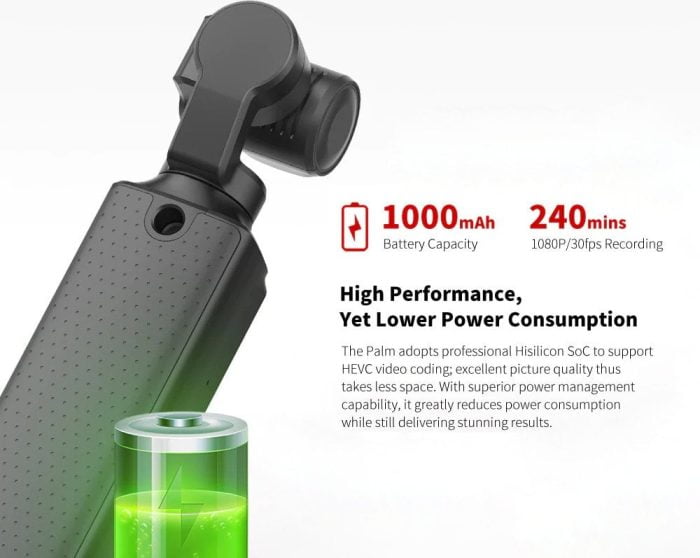 The FIMI Palm has a non-replaceable 1000 mAh battery installed. The running time depends on various factors, such as the resolution used, the display brightness or the existing connection (Bluetooth / WLAN). In individual tests, the recording time at 4K is between 90 and 120 minutes, at 1080p30 even up to 240 minutes are possible. The gimbal is charged via the current USB-C standard, which is also used in smartphones. Filming and simultaneous charging via power bank is possible. 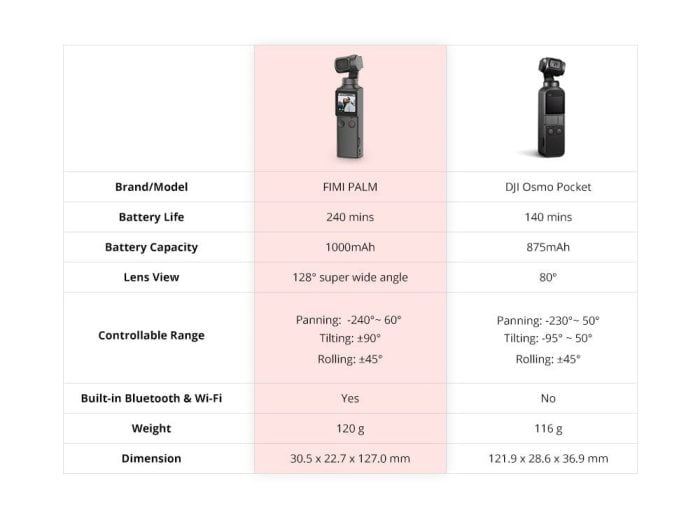 On the datasheet, the FIMI Palm wants to be the better handheld camera gimbal!

Measured by the DJI Osmo Pocket, the FIMI Palm presents itself as superior in many areas. Thus, some of the above specifications are much better, as well as there are some features that the Osmo Pocket does not even offer.

There is still a bitter aftertaste. FIMI hardly gives any insight into camera sensors. Can we expect a high-quality Sony camera sensor and if so, which one? After all, in the comparison above, FIMI does not go into the fact that the Palm “only” records in 4K @ 30 instead of 4K @ 60 (Osmo Pocket).

So it remains exciting how the 130 expensive handheld camera beats in reality. Of course, as soon as we know more or we get a test copy, the article will be updated. 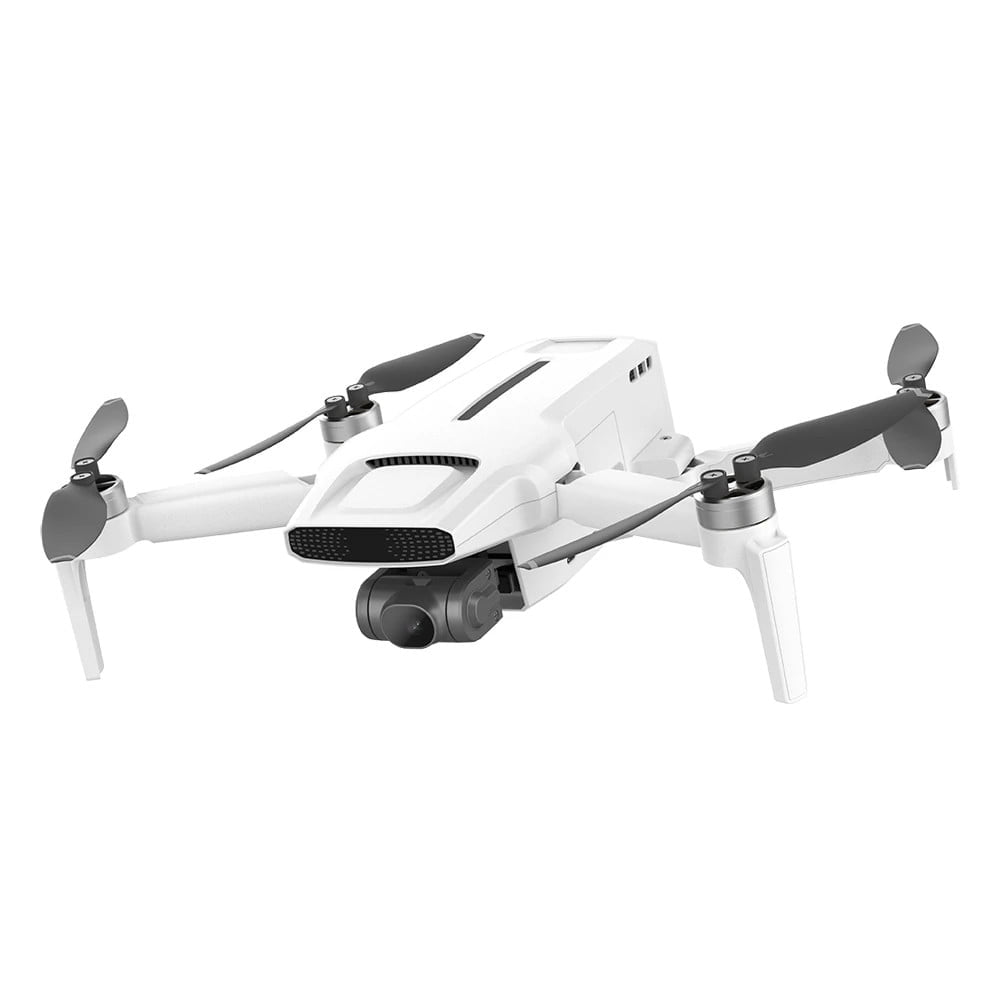