Fidget Spinner Test - What good is the anti-stress gadget? 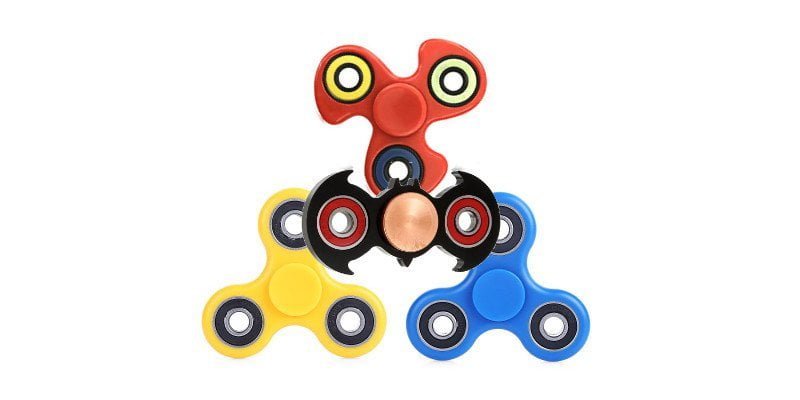 by Timo10. July 2017
The gadget world is shaking! Two new anti-stress gadgets, namely Fidget Spinner and Fidget Cube, are currently among 2017's hottest gadgets. In this post, we will take a closer look at the fidget or hand spinner - who has accompanied me for a week and has been extensively tested.

The fidget spinner in the test

Everybody knows it. You're somewhere on the road, at work or just sitting at the university and somehow have to kill time. So-called Anti-stress gadgets should remedy and calm troubled hands or just distract. The Fidget Spinner is such a gadget and should, as the name implies, between the fingers "spun" so turned. For this the Fidget Spinner has mostly 3 or more ball bearings, One of them is in the middle, the others are attached to the outer ends. The ball bearings are mainly surrounded by plastic, sometimes even from the 3D printer. However, there are also higher quality hand spinners made of metal. 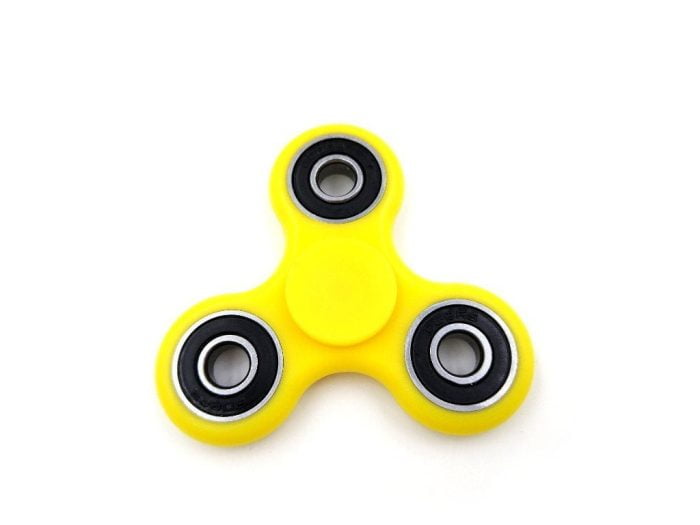 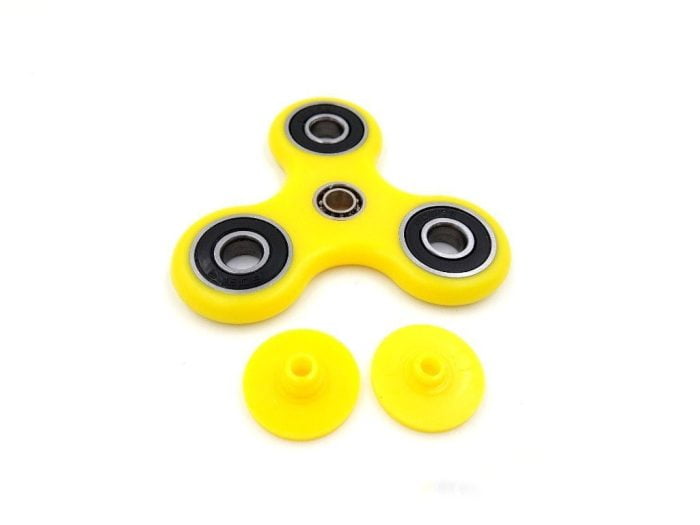 For our test, I ordered a cheap spinner on Amazon. Prices usually range from cheap 4 € for a China spinner, to rich 70 € for a high-quality spinner made of metal and with ceramic ball bearings. The shapes and colors could hardly be more different. The spinner I tested consists of a total of three 688 ZZ Ball Bearings and just cost 6 €. Accordingly, the quality of workmanship fails. The ball bearings are surrounded by a housing made of ABS plastic, a material that is mainly used in 3D printing. Although the ball bearings are tight and the case looks solid, but you realize that you have no high-quality manufactured gadget in front of him. Rather, it looks like a self-produced 3D printing, which was provided with cheap ball bearings.

The best fidget spinners on Amazon

Many dealers on Amazon sell this toy very cheap. Often, shipping is from China and can take up to a month. By the time the spinner arrives, the hype has certainly subsided. In order for the spinner to reach you within a few days, I have selected only Fidget Spinner for this leaderboard, whose shipping is sent directly from Amazon or as a premium long-haul from one of the European warehouses! The list is updated regularly.

In the practical test, the Fidget Spinner accompanied me for a week. If the situation came up, the spinner was unpacked and played a round with it. If you turn the gadget with some momentum and hold it in the middle, you can hear and feel how the spinner gently turns between his fingers. The slight hum should be particularly relaxing, according to the manufacturer. All right, you can hear the spinner hiss. Under relaxation I understand something else.

More interesting is the slight resistance, which builds up by the Andrehen and which makes the hand-Spinner felt can direct. Especially in the evening on the PC, I often caught myself unconsciously grabbing the spinner and turning the gadget a few laps between thumb and forefinger or balance. After a few rounds, the little yellow toy was quickly on its side again. At work or at university I would not use the spinner. On the one hand, it can be annoying in the long run, as well as it happens quickly that the spinner makes himself out of carelessness.

Of course, I also measured how long the spinner is spinning. The manufacturer himself gives one Turning time from 1 to 3 minutes at. In the test, the average rotation time was about 2 minutes.

For me, the Fidget Spinner is a mere gimmick that you do not actually need, but which you unconsciously like to use to calm your troubled hands. Whether you should actually spend more than 20 €, everyone has to know for themselves, because in this gadget above all the quality determines the price. Of course, those who follow the hype for a long time will, as collectors, spend considerably more for a hand spinner. Who wants to grow this gadget out of sheer interest, I recommend to spend no more than 20 € for it. 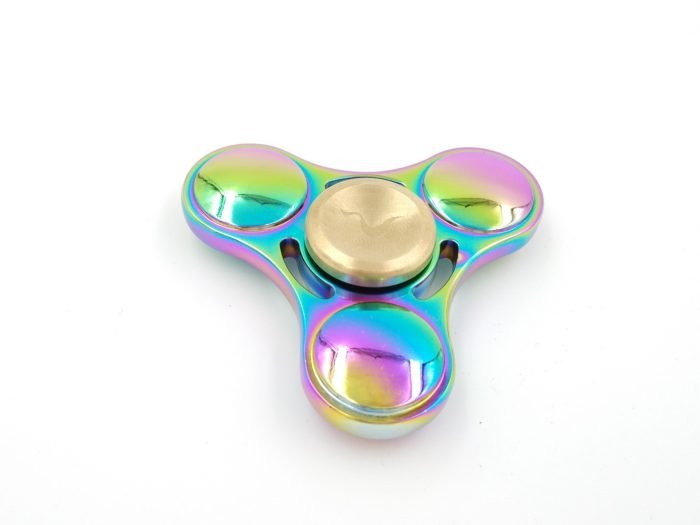 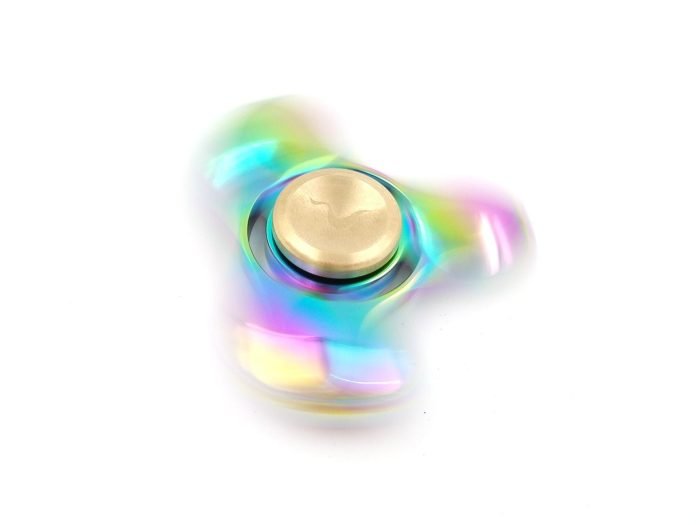 Meanwhile another spinner has arrived. The Syourself Titanium Tri-Spinner is a compact spinner with Dimensions of 6 x 6 x 1,5 cm and a weight of 141g, The spinner makes a really solid impression and the design is also impressive. Unlike the traditional ABS spinner tested above, the Titanium Tri-Spinner achieved one in the test Rotation time of 5 minutes, Priced the spinner is at 11,99 € and is available directly from Amazon.

Often the question arises whether it makes a difference, whether the spinner Ceramic or a metal ball bearing used. The answer is yes! In the expensive against cheap test, I have two identical-looking ABS Fidget Spinner compete against each other. One of them used an 2 € ceramic ball bearing, the other a 0.30 € metal ball bearing. Spinned with equal force, was with the spinner with Metal ball bearing already after about 45 seconds Ending. The spinner with Ceramic ball bearings on the other hand spinned much longer and came to full 2 to 2 1 / 2 minutes, So if you want a long-spinning spinner, then you should grab the more expensive ceramic spinner. Most dealers indicate in the product description which ball bearings are installed. If you buy your Fidget Spinner instead in retail, you should definitely ask before buying!

Turning the spinner only between the fingers will be boring in the long run. However, not everyone can do little tricks with the gadget. Here are the coolest tricks for beginners and advanced!

A simple but cool trick is to first balance the spinner on one finger and then jump on the next finger. In the beginning, you will certainly need a few tries until the spinner hops on the next finger without any mistakes. Balance is everything! Advanced players can extend the trick even further and even let the hand-spinner hop from one hand to the other!

Give your spinner a good spin and throw it in the air. Try to catch him again without losing the spin. As an increase, you can also try to catch the spinner with the back of the hand or to balance on another part of the body. It's even more fun to throw the spinner to a friend!

A really unusual trick is to use spinners as a pick. Which cool songs you can play with it very easily, you can see in this video!

Nice article! In my opinion you should spend at least 10 € for a Fidget Spinner - then you have a lot of fun with the toy.