The Dreame Bot Z10 Pro isn't quite as new as you might think at first. Basically, it is also the very new one Dreame Bot L10 Pro, which comes with an additional suction station as the Z10 Pro model. 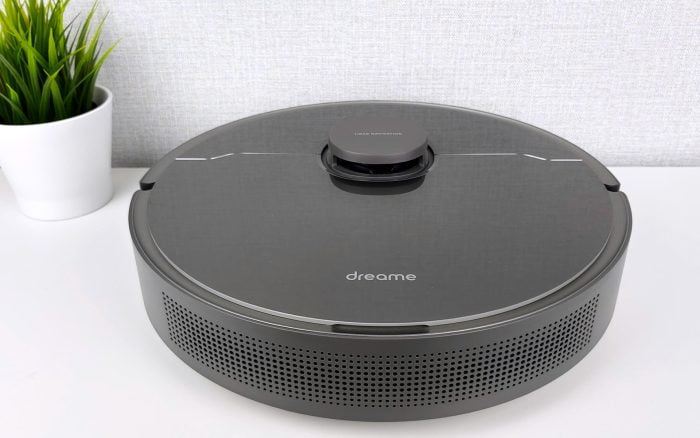 In terms of design, the Dreame Bot Z10 Pro differs little from other brands of vacuum robots. The case is classically round and measures 35,3 x 35 x 9,68 cm. The weight is 3,8 kg.

The most distinctive feature of the top is the laser tower. In contrast to other vacuum robots, such as the one we recently tested realme TechLife Robot Vacuum, the tower is not in the middle, but a little further on the edge.

In interaction with the double LiDAR sensors aligned in the direction of travel, Dreame promises precise 3D space and obstacle detection. How exactly the Dreame Bot Z10 Pro goes to work, more on that later. 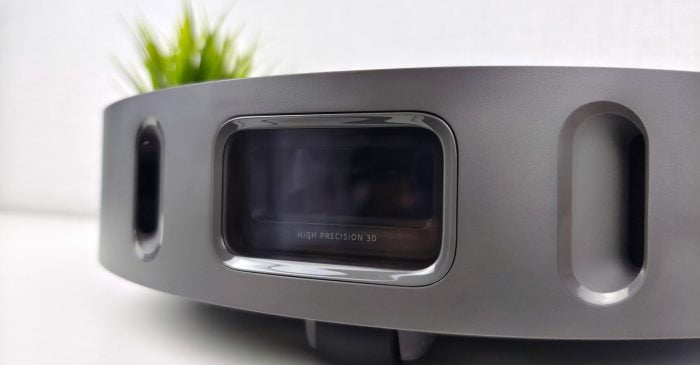 Also on the top we would have a control element with a target cleaning button, the on / off and cleaning button as well as a button that sends the vacuum robot back to the charging station. 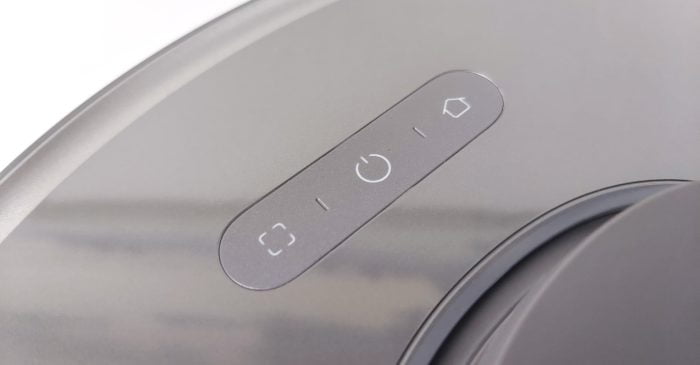 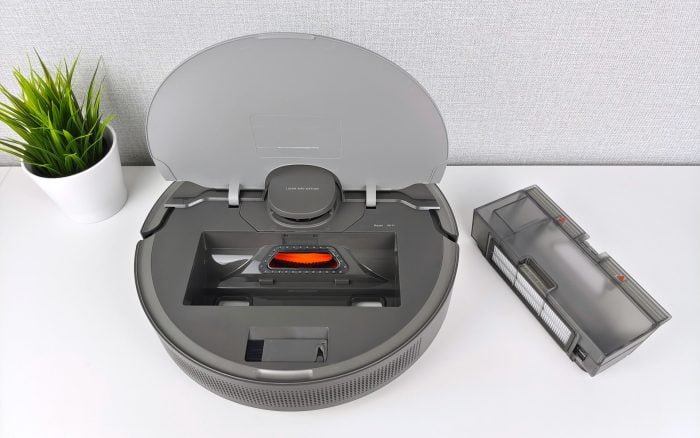 Viewed from below, the rubberized drive wheels are in the middle with the main brush in between. A rotating brush attached to the side directs the dirt towards the main brush. In the direction of travel we would then have a guide wheel and the charging contacts located next to it. 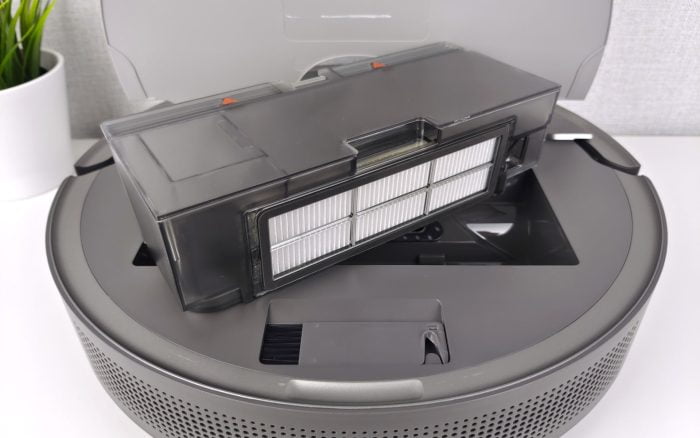 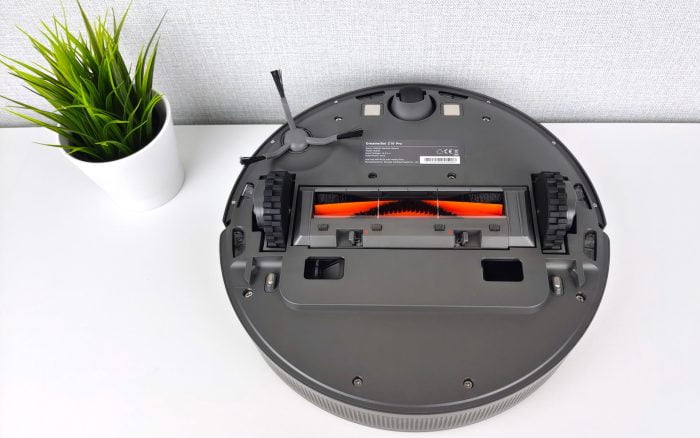 There is nothing wrong with the processing quality, especially the plastic used. The vacuum robot makes a robust impression and the glossy top looks chic, even if it is a little more susceptible to fingerprints and dust.

In addition to the vacuum robot and the suction station, the scope of delivery also includes a cable, the water tank with a microfiber cloth, a replacement filter for the suction station and multilingual operating instructions. A cleaning tool is hidden under the cover of the robotic vacuum cleaner. Additional accessories or spare parts, such as an additional brush, are not included. However, spare parts are available in stores. 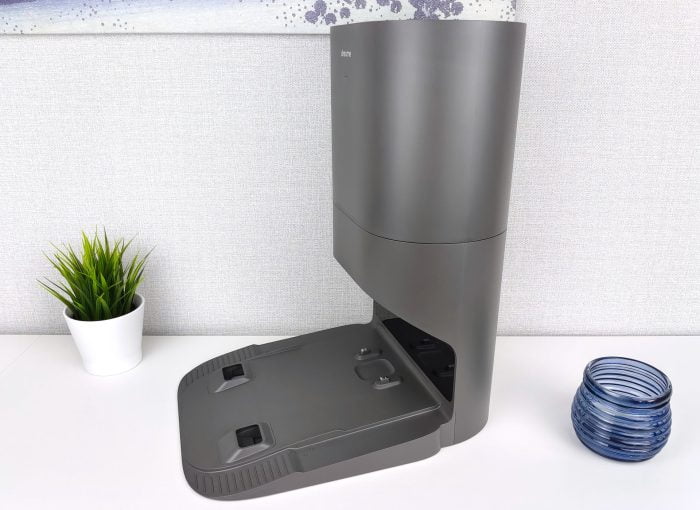 To set up and use the robot vacuum cleaner, we need the Xiaomi Home app. Some people will surely ask themselves what exactly Dreame has to do with Xiaomi. The explanation is pretty straightforward. Dreame is part of the Xiaomi ecosystem, which consists of numerous smart home products from various brands and manufacturers. Often times, Xiaomi supports products from these brands both financially and technologically.

The Xiaomi Home app is available for download for Android and iOS devices in the respective app stores. In order to integrate the Dreame Bot Z10 Pro into the app, we have to register and grant the necessary authorizations (WiFi and Bluetooth).

The connection process went without any problems in the test. The robot hoover was found straight away and was set up in just a few steps. English voice prompts and detailed instructions within the app make it easier to set up. It should be noted, however, that a 2.4 GHz WLAN is required for the connection, which the vacuum robot can hook into. Networks in the 5 GHz frequency range do not work!

During the setup, you will already receive initial tips on how to best prepare your home and how to position the suction station. It is also possible to name the vacuum robot as desired, to share it with family members and to determine the living space where the charging or suction station is located. This makes it easier to manage other Xiaomi Home devices.

Other useful features of the Dreame Bot Z10 Pro are the following:

In total, the Dreame Bot Z10 Pro offers four suction levels (light, standard, strong and turbo) as well as three water discharge levels (low, medium and high). In the settings there are, among other things, adjustment options for voice announcements (e.g. German as language), the performance boost on carpets, child safety and 3D obstacle avoidance.

Emptying at the suction station can be planned after one, two or three suction processes. With the help of the in-app remote control, the direction of travel of the vacuum robot can be controlled manually. Via the item service plan you can see the condition of the wearing parts (filter, side brush, main brush and sensors) and whether you should clean or replace them.

So much for the app. Let's see how the Dreame Bot Z10 Pro performs in practice.

First, let's look at the suction power. At the highest performance level, the robot vacuum goes to work with a suction force of up to 4000 Pascal. In the test environment, however, the "light" mode is sufficient to suck up most of the dirt. The sideways rotating brush transports the dirt to the main brush, where it is vacuumed up and finally ends up in the large 400 ml dirt container.

The v-shaped bristles and lamellas of the main brush prevent long hair from getting caught in it. If a hair does get caught anyway, it can be removed in no time with the included cleaning tool. 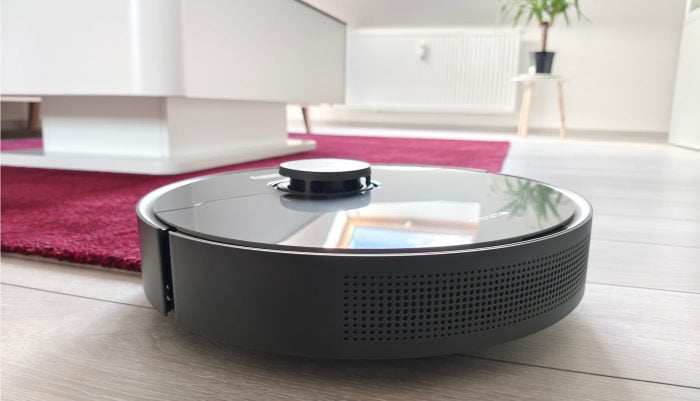 If the automatic carpet detection is activated, the suction power on carpets is increased. It even works really well and you can hear the vacuum robot switch up a level shortly after hitting the carpet. Carpet edges and heels are mastered up to a height of about 2 cm. 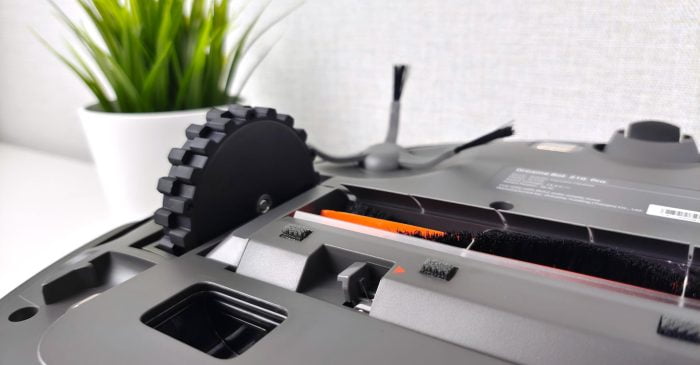 Shaggy piles with a height of more than 2 cm cause problems for the Dreame Bot Z10 Pro, as well as most of the robotic vacuum cleaners. Should the vacuum robot get tangled, it will first try to free itself. If the rescue operation fails, he pauses the suction process and informs the user.

A few more words about the volume. The volume is hardly significant in the weakest mode. The vacuum robot sucks comfortably quietly at around 45 dB, so that you can chat without any problems. With increasing suction power, the volume increases and reaches up to 70 dB.

A special feature of the Dreame Bot Z10 Pro is the 3D obstacle detection. Two lasers detect objects ahead in 3D and avoid them. The accuracy ranges up to about 8 meters. There is also the classic laser tower (LiDAR), which ensures extensive and precise spatial scanning. 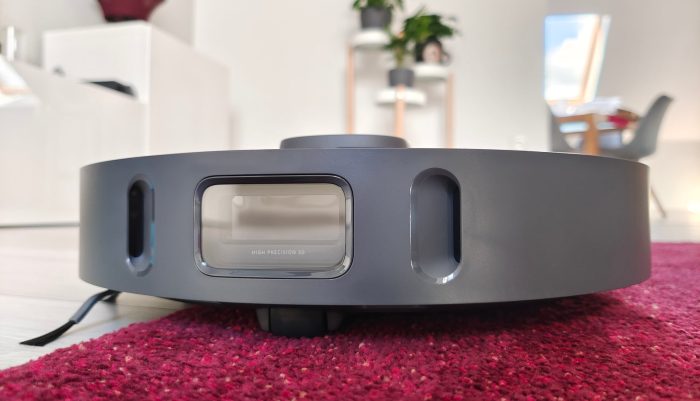 Large and small obstacles were recognized and avoided at least most of the time in the test. The robotic vacuum cleaner could avoid large obstacles such as chair legs or flower pots without touching them.

The vacuum robot has also largely avoided smaller obstacles such as cables, shoes or socks lying around. Only with higher carpet edges, which were just below the 2 cm threshold, the Dreame Bot Z10 Pro could not always cope. The vacuum robot did not want to drive onto a black deep pile from IKEA. However, numerous other vacuum robots have already failed because of this. 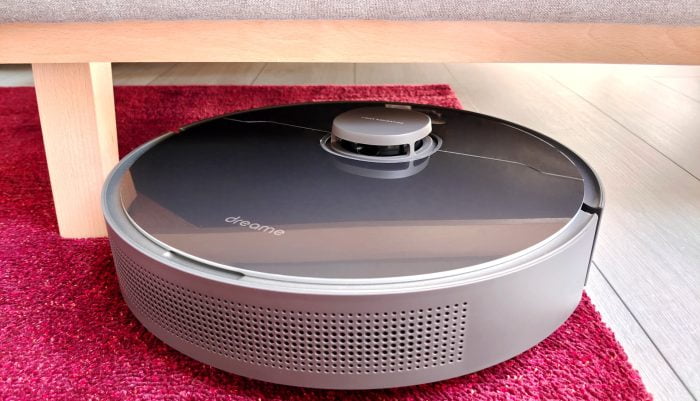 If the Dreame Bot Z10 Pro is not yet familiar with the room, the first cleaning process always takes a little longer. For a 59 m² cleaning area, the robotic vacuum cleaner needed an impressive 87 minutes for the first cleaning run. The subsequent cleaning process, however, only took 75 minutes. Overall, the Dreame robot vacuum needs a little longer than other models. However, the suction process is also much more cautious.

The created space map is detailed and shows large and small obstacles very well. Functions such as the virtual wall, the no-go zones or the selective room division work as desired.

To wipe, we only have to attach the supplied water tank to the underside. For this we don't even have to turn the robot hoover, because the combination of water tank and microfiber wipe is simply plugged in and held magnetically. The voice output confirms the successful installation. 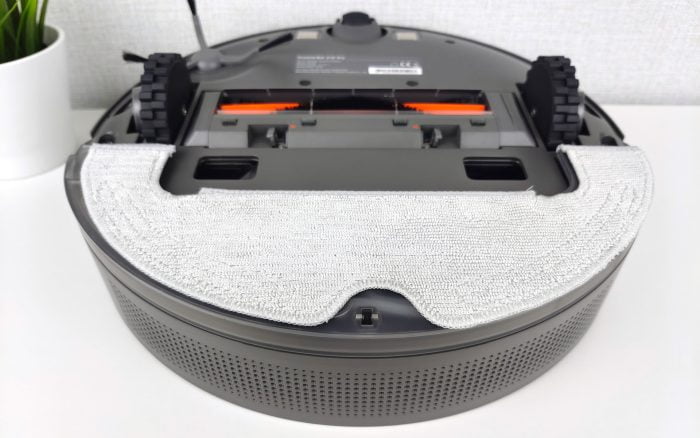 The water tank has a capacity of 150 ml. That is not a lot, but depending on the amount of water released, it is enough for a 100 m² area. The water is dispensed via an electronic pump that dispenses the water to the wiping cloth in low, medium and high levels.

The wiping power is sufficient to wipe up fine dust and light stains. However, the Dreame Bot Z10 Pro does not remove stubborn stains. The no-wipe zones that can be drawn on the virtual map are particularly useful. This avoids the robot vacuum cleaning carpets in mopping mode.

The suction or emptying station is one of the highlights of the Dreame Bot Z10 Pro. It is also the manufacturer's first vacuum robot to offer this additional feature. The dimensions of the suction station are 30,2 x 40,3 x 48,3 cm. So it should be able to be accommodated in almost every household. The design is simple and the workmanship is of high quality. 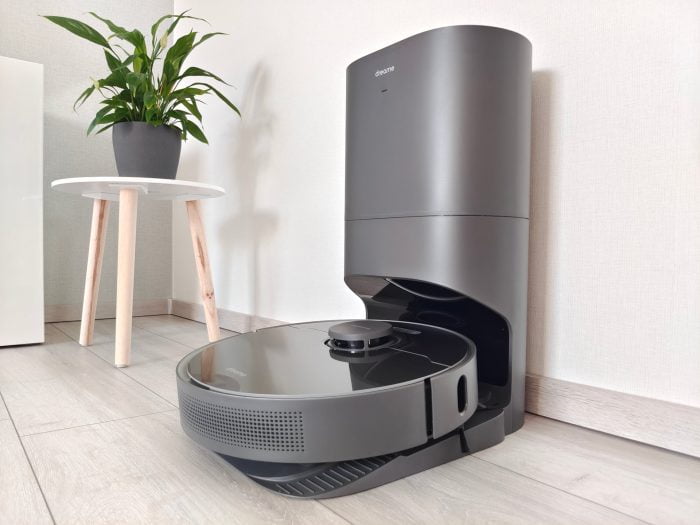 In addition to the emptying function, the suction station is also the charging station for the Dreame Bot Z10 Pro. After the cleaning process, the robot vacuum drives up the station's small ramp, where the robot vacuum cleaner's dust container is automatically vacuumed over the underside. The emptying process takes approx. 10 seconds. In this short time it gets quite loud, because the suction station with 800 watts of power builds up a high suction pressure. 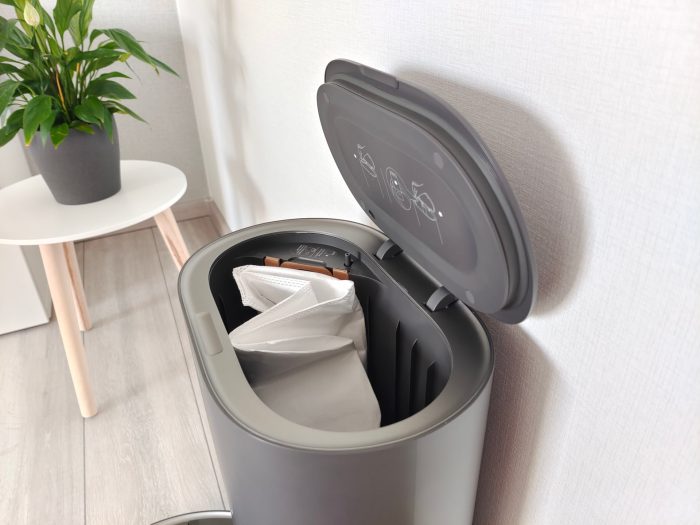 The sucked in dirt lands reliably in the dust bag of the suction station. This is similar to a vacuum cleaner bag and prevents the fine dust from being released back into the environment. The volume is 4 liters, which corresponds to about 65 suction processes. How often the dust container of the vacuum robot should be emptied can be determined via the app. The suction function can also be switched off completely there.

The battery of the Dreame Bot Z10 Pro has a capacity of 5200 mAh. This is the common standard and corresponds to a running time of 160 minutes at the standard suction level. Transferred to the cleaning area, the robot vacuum cleaner cleans approx. 115 m² in one go before it automatically returns to the charging station or suction station from 15% remaining capacity. Unfortunately, this threshold cannot be adjusted in the settings. When the robot vacuum is reloaded, the interrupted vacuuming process is automatically continued. 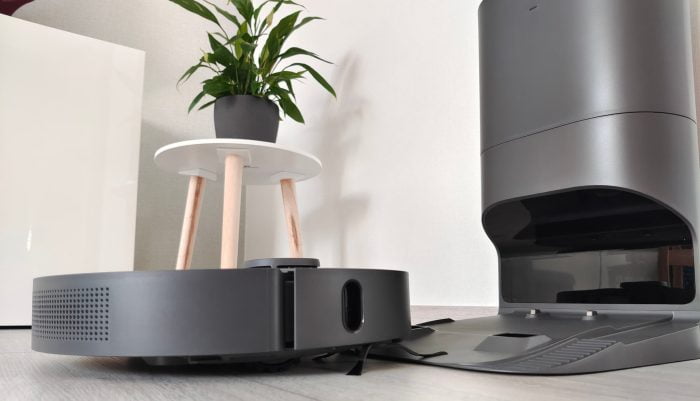 The runtime is correspondingly shorter in Turbo. Correspondingly longer at the lowest level. The battery is fully charged after 5 hours.

The Dreame Bot Z10 Pro places itself very high in the highly competitive vacuum robot segment. From the processing quality to the usability to the cleaning performance, there is hardly anything to complain about. The 3D space recognition works and even recognizes objects that other vacuum robots mercilessly run over. Nevertheless, there is still a little need for optimization. A Roborock S6 MaxV with a similar room detection function maneuvers a little more precisely, but does not offer a suction station for a similar price.

The Dreame vacuum robot can clearly score here. With its four suction levels and automatic carpet recognition, the robot vacuum cleaner is ideal for hard floors and carpets. Fine dust, but also hair, scraps of paper or coarse dirt are mostly vacuumed up. In terms of volume, the vacuum robot is comparatively quiet even at a higher suction level. The suction station, which reliably empties the dust container of the robot vacuum cleaner, is practical, without having to lend a hand after each suction process.

The connection to the Xiaomi Home app is also worth mentioning. As a result, Dreame relies on an advanced app that many users are already familiar with. If you have other Xiaomi products in the household, you can conveniently manage them using a single app.

Is the Dreame Bot Z10 Pro worth recommending? Absolutely! The vacuum robot does not set a milestone, but knows how to convince in the most important areas. 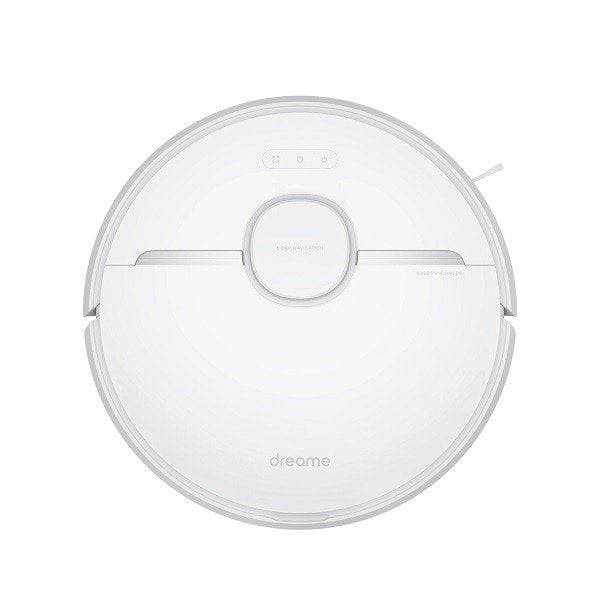 Dreame D9 Product details Vacuum robot with laser This is the new Dreame D9 vacuum robot. The new model from the company close to Xiaomi is already ...