by Timo14. September 2018
The year has just begun and DJI is really knocking us out of our socks. With the addition of the DJI Mavic Air, the Chinese drone manufacturer has rebuilt its hobby business by presenting a drone that combines the best of the DJI Mavic Pro with the compactness of a DJI Spark.
Overview
Manufacturer/Model

With the DJI Mavic Air At the beginning of January, the Chinese drone manufacturer "DJI" released another drone for the consumer market, 2018, which is priced and functional between the entry-level drone "DJI Spark" and that, much sought-after among drone lovers "DJI Mavic Pro" classifies. Since January 2018 the drone is officially available and is awarded with an RRP of 849 € for the standard model and 1049 € for the so-called Fly More Combo. Before we devote ourselves to the functions and characteristics of Mavic Air, first of all one Overview of the most important DJI consumer drones.

To the DJI Mavic Air Deals

Already based on the design of the drone, it is striking that the DJI Mavic Air the best of DJI Spark and the DJI Mavic Pro want to combine. The Mavic Air is designed so that it folds up like the big brother. Despite the rigid propeller The arms can be easily folded to the housing. According to DJI, the folded drone is no bigger than a conventional smartphone. Just under Mobility aspects The compact design of the Mavic Air is a viable proposition, making the drone hardly an obstacle even when traveling. From the smaller Spark DJI has taken over the color variety. The drone is available in polar white, fire red and onyx.

One of the most essential features of a consumer drone, of course, is the flight fun as well Recording quality of the camera, DJI has once again for one 12 Megapixel Camera (1 / 2.3 "CMOS) decided by a supportive 3 axes gimbal is stabilized. Videos takes the Mavic Air with maximum 4K resolution (3840 x 2160) at 30 images-per-second on. Noteworthy is the Video Bitrate, With the 100 Mbps even the Mavic Pro surpasses. Of course, a higher bitrate means a higher information transfer, which means a better video quality is possible, especially with fast-paced recordings. The Recording format for videos is MOV or MP4, encoded in MPEG-4 AVC / H.264.

DJI - Song of Myself - Shot on Mavic Air

Photos takes the drone off with a resolution of 4056 3030 x pixels on. The Recording format for photos is JPG, as well as recordings in the Raw data format DNG to save. The recordings are saved as usual on one MicroSD memory card, A unique feature of the Mavic Air is a internal memory of 8GB, If you do not have an SD memory card at hand, recordings can simply be stored on the internal memory. Other features of the camera are a Field of view of 85 °, Fixed focus (Infinity Focus) and Aperture f / 2.8, Also on board are special recording modes. This can be, for example Slow-motion shots in FHD at 120 images-per-second. In just 8 seconds, the Mavic Air is also capable of one 25 frames, 32 megapixel panoramic shot take. New HDR algorithms additionally ensure an improved dynamic range.

Based on the airspeed alone, DJI has found a new leader with the Mavic Air. Whole 68.4 kilometers per hour, the drone flies in the ideal case and of course only with active sports mode. The maximal Ascent and descent speed is 3 or 2 meters per second, Also the Flüghöhe can be seen and lies in possible 5.000 meters, Of course, this value is only a theoretically possible value. The CE-compliant transmission range is 2000 meters. FCC compliant, even full 4000 meters would be possible.

We drove the drone through one 2375 mAh Lithium polymer battery, The maximal flight duration gives DJI 21 Minutes at. Thus, the Mavic Air places itself between the smaller DJI Spark and the bigger one DJI Mavic Pro, According to first practical experience, even a longer flight duration is possible, which reduces the distance to the DJI Mavic Pro again. Charging the battery can on the one hand directly on the newly introduced and located on the drone USB-C socket or quite classic about the included Charger or the charging dock, The price of one spare batteries gives DJI with one EIA of 79 € 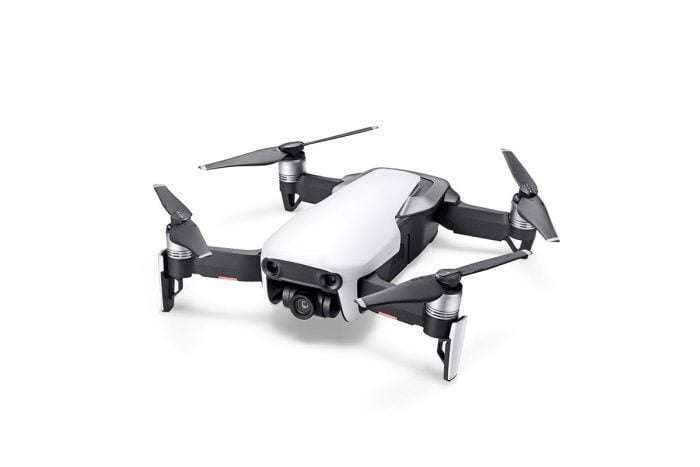 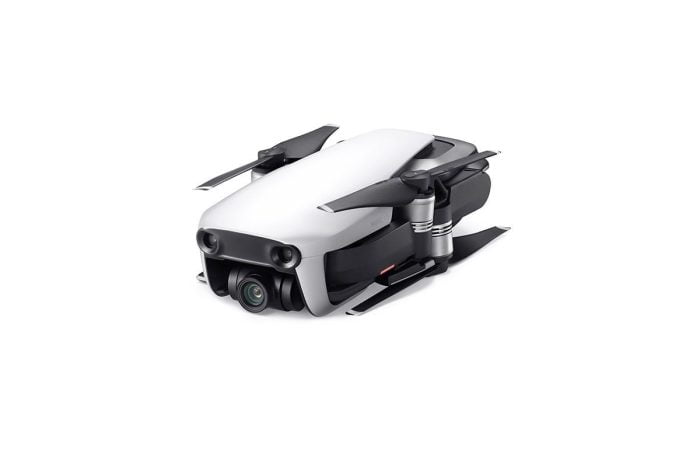 Like the previously released DJI drones, the Mavic Air is also equipped with various autonomous flight modes and functions. in the "Active Track" Mode, the drone is able to track up to 16 objects or people and to follow them completely autonomously at every turn. So-called "Quick Shots" (Rocket, Dronie, Circle, Helix, Asteroid, and Boomerang) make it possible to put the Mavic Air in an autonomous maneuver at the push of a button to take the appropriate snapshot. Of the "Smart Capture" Mode allows the drone to be controlled purely by hand gestures. With "TapFly" In addition, the Mavic Air can be operated via the connected mobile device. The control is done by virtual joysticks or touch gestures.

For a precise and above all safe flight the "FlightAutonomy 2.0" Sensors. A total of 7 forward, downward and backward cameras and sensors monitor the environment of the Mavic Air. Trees, shrubs or other obstacles are automatically detected and safely flown around or avoided. Of course, the drone is also based on GPS and GLONASSwhich allows an automatic return to the departure point in case of emergency or at the push of a button (Return-To-Home (RTH)). 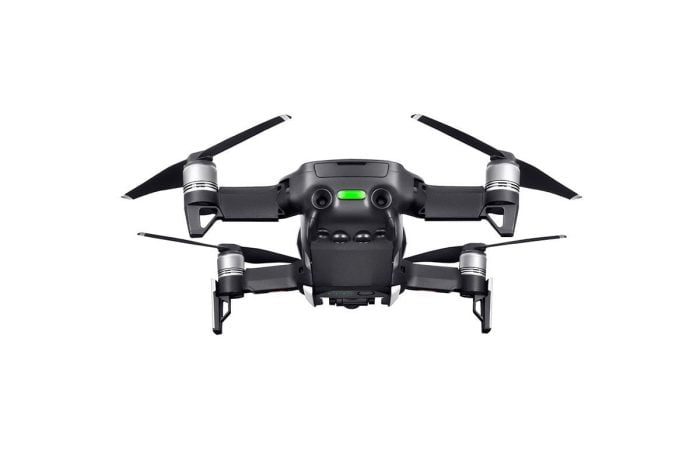 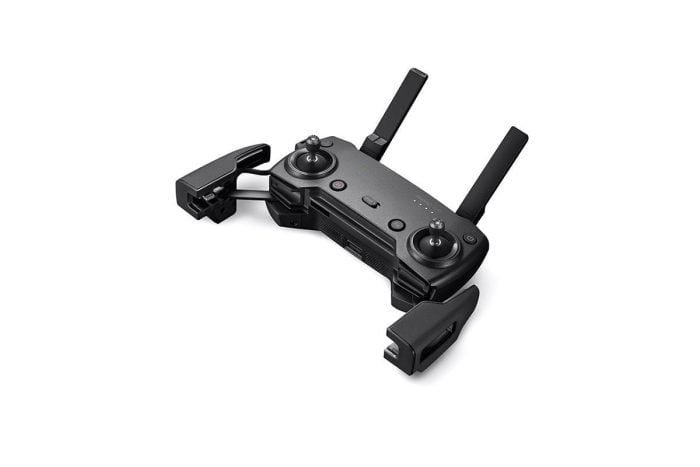 The DJI Mavic Air presents itself as Mix of Spark and Mavic Pro, For those of you who want the Mavic Pro to be one size too big, but at the same time do not want to miss out on high-resolution 4K recordings, DJI has put together a very interesting overall package. DJI has also improved some things compared to the previously released consumer drones. Among other things, worry additional sensors for even better flight safety. Videos are in an even higher bitrate recorded and otherwise there are many minor improvements, such as collapsible landing feetOr unscrewable joysticks, Next to the coming soon Review, you will find attached the best deals for different DJI drones and what to pay attention to when buying abroad. The offers are updated regularly. It is worthwhile to take a look!

Basic package of Mavic Air is available at the DJI Online Store from 849 €. The Fly More combo with two additional batteries, a multiple charging station, a battery on power bank adapter, additional spare propeller and a larger travel bag, there are directly from DJI 1049 €. If one compares the prices with other countries, such as the USA, the DJI Mavic Air appears comparatively expensive despite the pre-tax price. For example, the basic model costs $ 799 in the US and $ 999 in the Fly More combo. It is therefore very popular to order the drone right away in a third country. Often it will be on Online shops from China The DJI products sell some hundreds of euros under the EIA.

If you look in the better known China shops, such as GearBest, TOMTOP, Banggood or Geekbuying um, the drone is partly already for under 700 € to find. These prices sound tempting at first, but what about the Warranty of the dealer or else Manufacturer warranty out?

Many dealers from China often offer a free exchange, provided the goods "Dead-on-Arrival", ie already arrived broken. What initially sounds positive, however, is much more complicated in practice. The "dead-on-arrival" warranty of the dealers usually goes hand in hand with the product, in this case the Mavic Air own costs back to China sends. Probably the most popular dealer "GearBest" is, however since the beginning of 2018 passed to, also one Return address based in Spain ready injury. Further information can be obtained from the respective customer service of the shops.

In addition, one is through PayPal protected, if you choose this payment method. More interesting is the question, in which frame you also the Manufacturer warranty can claim. In the net one reads many times that the DJI manufacturer guarantee applies only to the country, in which the Mavic was acquired. That's not true! There are no disadvantages when ordering DJI products from China. The warranty can be directly over the German DJI customer service be asserted and is also handled by this. Likewise it is clear to one, the drone for the DJI Care Refresh Program to register, which is completely independent of the place of purchase inventory.

One of the most popular places to go for DJI products is the online retailer GearBest, This shop has pretty much every DJI consumer drone and accessories listed and offers this with shipping from China, but now also with Shipping from European warehouses significantly below the DJI RRP. Of course you should pay attention to the respective ones Customs duties and applicable taxes (19% EUSt). The Delivery time from China is usually between 10 and 20 working days, who with Shipping from one of the EU warehouses ordered, keeps his drone mostly after 4-7 working days in the hands. Of course additional charges do not apply when ordering from an EU warehouse.

Many shops have also passed to customers, even when ordering from China accordingly To reimburse taxes retrospectively or by "Delivery Duty Paid" to be sent, ie customs duties and taxes to be paid directly at their own expense. Other shops also offer the often as "Priority Line" or "Germany Express" designated shipping method. Initially, the consignment will be sent to a logistician in another EU country, which in turn imports it in accordance with the regulations of the respective country. Subsequently, the shipments within the EU are made to a German logistics company, which in turn transmits the consignment to an association service provider. Again, the respective shop takes over the import.