by Timo30. July 2018
Probably the most advanced consumer drone will soon receive a successor. We are talking about the DJI Mavic 2 Pro, which is to become the new flagship model of the DJI Mavic drone series. At the end of July the drone was to be officially presented, but nothing came of it. Meanwhile, new leaks of a British mail order catalog are circulating, showing not only the Mavic 2 Pro but another model, the so-called DJI Mavic 2 Zoom. Let's take a closer look at what the leaks are about!
Overview
Manufacturer/Model

That DJI will present a new Mavic drone this year is now foreseeable. For several weeks kept doing new leaks the round that the DJI Mavic Pro Successors in full bloom showed. Now a new leak has surfaced, giving a detailed look at DJI's new drone. The leak has been published in the form of a print ad in the UK "Argos" catalog, But before we turn to the new leak, here is an overview of what the gossip factory hergibt: 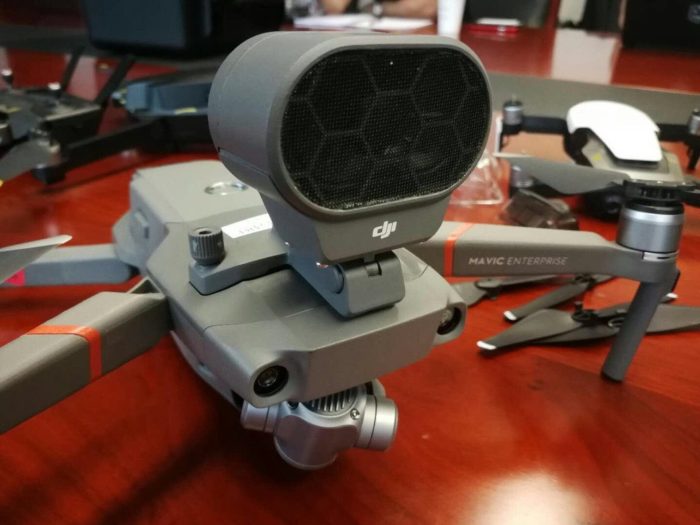 But now to the latest leak ...

Argos is one of the most well-known British catalog shops, comparable to the local OTTO catalog. The catalog is released quarterly, which makes the first leak that the Mavic 2 Pro has been in production since February and is close to publication even more likely. Presumably, the catalog was already printed when DJI had to cancel the July event. 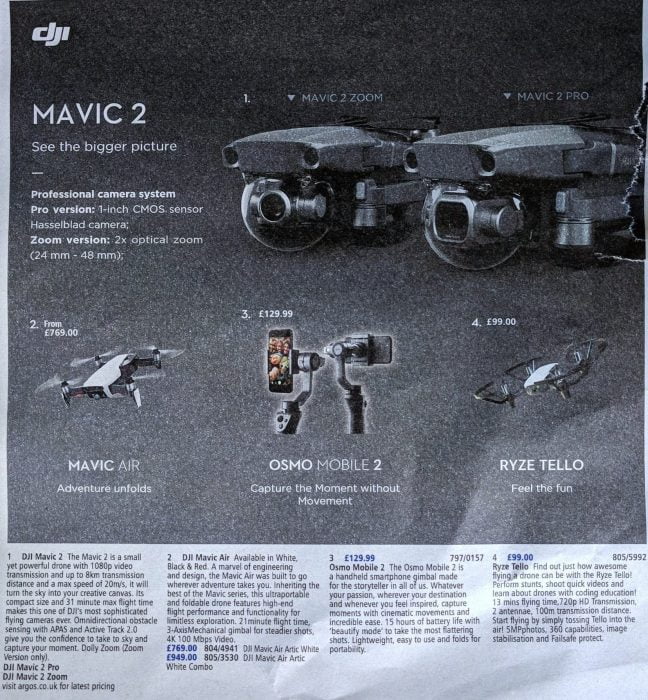 The DJI Mavic 2 Pro should with a 1 inch Hasselblad camera be equipped. To what extent the Swedish manufacturer of medium format cameras is responsible for the entire camera or only individual components is not clear from the Argos Leak. Striking is that rectangular camera glass, Circular PL filters are guaranteed to no longer fit! A lossless, optical zoom is not expected because of the sensor size.

Instead, appears with the DJI Mavic 2 Zoom another model. This becomes clear with a smaller sensor be equipped, among other things one 2-fold optical zoom allows. The focal length is 24 - 48 mm, A feature that is only entitled to the zoom is the Dolly zoom effect, also called Traveling Zoom or Vertigo effect. By opposing the focal length to the flight movement, the focused object remains in the same size in the image, whereas the background is increasingly removed or approaching.

design changes DJI has made only a few. The Mavic 2 Pro is to maintain the compact form factor of the Mavic series. Striking are the, at least after the recent leaks, appear larger engines. It is quite possible that the drone is equipped more powerfully. After all, that lies maximum airspeed and get better at 20 m / s, whereby the drone would beat its predecessor by 2 m / s. The image transfer should with high resolution 1080p to 8 km be stable. The flight time will with 31 Minutes specified. In comparison, the flight time of the Mavic Pro is a maximum of 27 minutes. 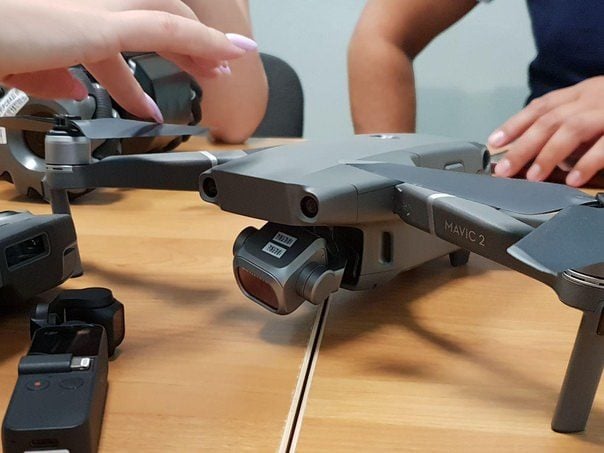 The Anti-collision protection should be omnidirectional, ie spherical in all directions (360 degrees) to be guaranteed. The APAS (Advanced Pilot Assistance System) Detects obstacles and assists the pilot with automatic evasion. Active Track sends the drone to tracker mode. What innovations Active Track 2.0 deliver is not yet apparent.

Here again all the previously known specifications in fast-forward:

Again, this leak does not tell you when the DJI Mavic 2 Pro and Mavic 2 Zoom will be released. Nor is there any new information about the price. The catalog leak merely refers to the online product page, which of course Argos has not put online. As soon as we get new information about the drones, prices and availability, this post will be updated!

I'm really curious what the cost will be. I expect that 1299 € guaranteed will not be enough. Get at least 1500 €. In my opinion, only the Hasselblad camera would be a selling point. And that only if the 4K60 can.

Expect synonymous with a significantly higher price than the old Mavic. 4K on 60 is unlikely in my opinion. I'm curious what to expect in the fall.