by Timo10. August 2020
Where WLAN and cable networks reach their limits, the Internet via the power line is exactly the right means to network devices with one another. In the following long-term test, the "world's fastest powerline set" - devolo Magic 2 WiFi - was able to prove its capabilities.
Overview
Manufacturer/Model

As "Digital Native" I first came into contact with the internet in the mid-90s. At that time, WLAN was still a foreign word and dLAN or Powerline for network setup was not yet available. The digital world mainly took place in the vicinity of the few telephone connections.

With the dot-com boom, the internet has accelerated. The 56k modem was followed by ISDN and finally DSL. The entire house was still not networked, but I came here for the first time as an alternative to laying cables 2004 with a Powerline adapters from devolo in touch.

This is what the devolo MicroLink dLan Ethernet Adapter MT 2026 looks like.

The devolo MicroLink dLAN Ethernet with a transmission rate of 14 Mbit / s has provided almost every room in the house with internet for years. As the WLAN standard progressed, the change finally followed, but more than 16 years later, powerline from devolo is again making its way into techreviewer. Let's start!

With the introduction of the devolo Magic 2 adapter, the technology behind devolo's Powerline was also revolutionized. You have the older HomePlug AV2 standard against the new one G.hn standard replaced. This achieves higher speeds with up to 2.400 Mbit / s in the powerline backbone and shows a higher Range (up to 500 meters) as well as stability in the network.

In addition to the Powerline function, devolo Magic 2 WiFi can also have a Mesh WiFi wind up. The term “mesh” stands for an “interlocking” network that, in contrast to conventional WLAN access points / repeaters, is a unified, uninterrupted network forms. You only need a single network connection to set up a mesh WLAN! At the same time, there are no compromises in terms of performance and reception quality.

If you combine Mesh with powerline, compared to the normal mesh, which maintains the connection purely by radio, a theoretically higher power throughput is possible.

The Devolo Magic 2 WiFi adapters are available as a multiroom and starter kit, as well as a single adapter. The Multiroom kit includes two WLAN adapters and a pure LAN adapter. As the name suggests, the set is ideal for providing two floors with WiFi. If you choose that Starter Kit, you are equipped with only one WLAN and one LAN adapter.

The What's in the box is clear. In addition to the adapters, this includes a network cable and a leaflet with safety and service information as well as brief instructions that go into the individual steps of commissioning in several languages ​​and in pictures. A detailed manual is available from the devolo website (Link to the manual) available.

The Design the adapter is kept simple. The dimensions of the rectangular plastic housing are 152 x 76 x 40 mm (WLAN) or 133 x 66 x 42 mm (LAN). A socket is conveniently not lost when plugged in, because each adapter is in turn provided with its own socket. A childlock is already integrated.

Putting the devolo Magic 2 WiFi adapter into operation should not cause any problems even for the technical layperson. Especially since the Illustrated quick guide simply explains which steps have to be taken for commissioning. However, one should note that the new G.hn technology is not compatible with the dLAN technology of older adapters! The same applies to the devolo Mesh, which cannot be combined with mesh adapters from other manufacturers.

Before you plug the devolo adapter into the socket, it is essential to use the one on the back WiFi key note! Each adapter has its own key, which is required for the first WLAN connection to the respective adapter.

To set up the powerline network, one of the adapters is connected to the router via Ethernet and the remaining adapters are distributed anywhere in the house. If this happens within 3 minutes, a powerline connection is automatically established between the adapters. If you want to expand the network, all you need to do is PLC button on an active adapter. The indicator light flashes repeatedly, which in turn means that the existing powerline network is looking for new adapters.

Practically! Simply write down the WiFi key on the back of the quick guide.

If you follow these steps in the correct order, the powerline network can be set up or expanded in no time. In the test, the connection setup worked right away. If you have problems establishing a connection, simply take a look at the detailed instructions on devolo.de. In contrast to the brief instructions, commissioning is explained in detail there.

The devolo network is configured and managed via the integrated web interface. This can be reached via any Web browser, the devolo Home Network App (Android / iOS) or the Cockpit software (Windows / Linux / MacOS).

Reaching the web interface is unfortunately not as easy as expected. Older dLAN adapters could be accessed directly via the browser at the address "http: //devolo.wifi". Unfortunately, the new Magic 2 adapters no longer offer this option, so that the IP address of the respective adapter must be known. In most cases this is assigned randomly by the router, so you first have to check which IP address the router has assigned to the adapter. Once you have found out the IP address, you can use it to call up the adapter's web interface.

This is what the devolo Magic 2 WiFi web interface looks like ...

Another possibility to manage the network is offered by the devolo cockpit software. Unfortunately, the implementation is not fully thought out here either. The software only works if the PC / Mac is connected to one of the adapters via Ethernet. If the connection is purely via WLAN, the adapters are not displayed in the cockpit software. The software itself only gives an overview of the network, how the adapters are connected to one another and at what speed they communicate with one another. For configuration, the software calls up the web interface via the browser.

... and here the cockpit software on a Windows PC.

The third way to manage the network, and one of the easiest to use, is devolo Home Network App. Install the app on the smartphone, connect to the devolo WLAN, call up the app and you get an overview of the network. The network can also be configured using the app. For this purpose, the web interface in mobile view is used.

The setting options are extensive and leave almost nothing to be desired. Thanks to the clearly structured menu items, operating the web interface does not cause any problems. WLAN, Powerline and LAN can be fully configured by the user.

Functional features, such as the new one WPA3 encryption standard, Guest network, One timing and childlock available. The Mesh function can be switched on at the push of a button.

The performance test was carried out with a devolo Magic 2 LAN adapter and four devolo Magic 2 WiFi adapters, which were installed on three floors of a residential building and in a garden shed 20 meters away.

The recorded measurement data are of course only indicative. Wall and ceiling thickness, distance and cabling are parameters to be taken into account that affect the WLAN and powerline performance.

For this test, the devolo Magic 2 LAN adapter was connected to the router and a PC was connected to a devolo Magic 2 WiFi adapter on the other floor via Ethernet. The transfer speed reached on average 150 to 200 Mbit / s. If the adapter and PC were in the same room, the speed was average 450 Mbit / s reached. Direct cabling via Ethernet is still faster, but the values ​​provided by the PLC network can be used very well in practice!

In the long-term test, the Network stability tested. There were no major disruptions. Except for a brief, incomprehensible connection break in the PLC network, the network was consistently stable.

This test was carried out over the entire house, including the garden and the garden house on it. The mesh function was switched on.

Data throughput in the 2.4 GHz network, with an adapter, measured on two floors.

WiFi roaming, i.e. the automatic change between the WLAN radio cells, did not cause any problems for the devolo Magic 2 WiFi adapters. The speed between the mesh nodes remained largely constant. In addition, you could move freely in the entire network without losing the connection. A Range test showed stable transmission and reception performance throughout the house, garden and summer house. A larger area can be covered very well with just one devolo Magic 2 WiFi adapter.

Data throughput in the 5 GHz network, with an adapter, measured on two floors.

In the test with about 7 connected network devices, the consumption of a single Magic 2 WiFi adapter was on average around 7 Watt. In surfing activities, consumption increased to a measurable level 10 Watt. The LAN adapter needed on average 3,7 Watt.

Would you like to know where you can buy the devolo Magic 2 WiFi? In our price comparison we list the current offers of the most popular shops. All prices are checked and updated several times a day. Should a shop appear several times, it concerns the different warehouses of the dealer.

No access via domain
No record speeds in practice

The devolo Magic 2 WiFi is an ideal solution to achieve a high-range, uninterrupted and fast network over a large area. Without laying any cables!

Powerline and Mesh, which the Magic 2 WiFi combines in one adapter, contribute to this. The new G.hn technology makes the powerline network even faster and more stable. Mesh, in turn, enables area-wide reception coverage in the WLAN. 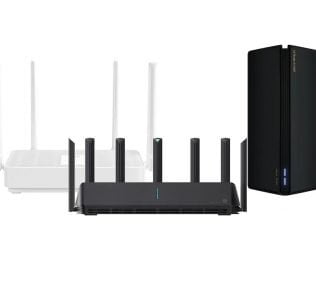 Hello, I'm thinking of getting the set here too. Now I have seen that there is the Devolo Magic 2 WiFi and Magic 2 WiFi next. I compared both data sheets, but couldn't see any difference. Do you have any idea what the difference could be? LG Stefan

Hi Stefan, when asked, I was told that the difference lies in the built-in WLAN chip. The Magic 2 WiFi next chip is faster and supports MU-MIMO.