by Timo12. December 2015
With the Cubot X15, the Chinese manufacturer Cubot has continued its "X-series" and launched an 5.5 Zoller in an extraordinary design and stately camera. Whether the smartphone has more to offer than other Chinaphones in other respects, I have looked closer in the test of the Cubot X15.
Overview
Manufacturer/Model

Review of the Cubot X15 smartphone

First impression of the Cubot X15

That was delivered CUBOTA X15 in Cubot's typical, brownish-gold shiny cardboard box. The package also included a manual in several languages, a small tool to open the two SIM card slots, a screen protector with cleaning cloths, a plastic case to protect the smartphone and a USB charging or data cable and a power supply with 5V and 1A.

Unpacked is already a carefully glued screen protector on the smartphone. This saves you the often difficult sticking a protective film. In order to be well looked after in the future, there is also another protective foil included.

When I took the Cubot X15 for the first time in my hand, I immediately noticed the very good workmanship of the smartphone. The frame of the Cubot X15 is made of brushed aluminum which makes it not only easy to hold, but also has a very high quality look. On the left side of the X15 are the two SIM card slots, where one of the slots can also be used as a memory extension. Here you have to decide whether you want to use the smartphone as a dual-SIM phone and waives a memory extension, or whether you operate a micro SD card in the second slot.

On the right edge of the case are the on / off button and the volume rocker. These are also made of aluminum and optically adapt to the case. The keys are stuck and even a rustling I did not notice.

The back is made of plastic and is also kept in the housing corresponding color. Unfortunately, you can not remove the back, so that the battery is not changeable.

At the lower edge of the case there is a micro USB socket, at the upper edge of the case we have an 3.5mm jack audio output. The bezel of the Cubot X15 is 3.5mm. Below the 5.5 inch Full HD display are 3 capacitive buttons. These have no backlight and are also extremely minimalist. At first I had to get used to these keys and was a bit disappointed by the missing backlight, but when I got more familiar with the Cubot X15, I could easily reach the keys and the missing backlight gives the design of the X15 a certain fine-tuning. The only major drawback is the missing notification LED.

My first impression was nonetheless positive. 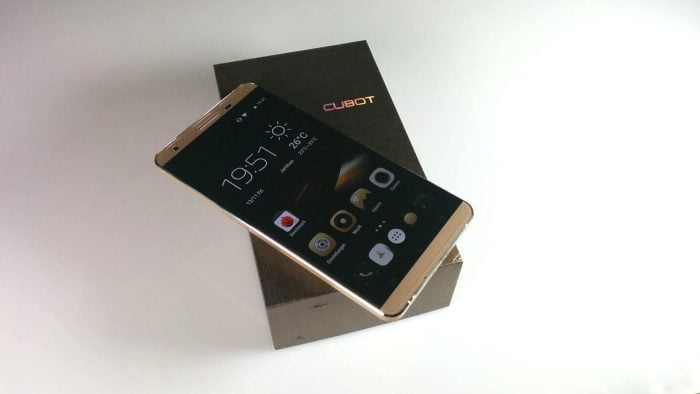 The Cubot X15 has a 5.5 inch Full HD IPS display and thus offers a resolution of 1920x1080 pixels. The manufacturer of the display is Japan Display Inc. (JDI), which is by no means an unknown producer. The front has 2.5D "Curved Glass", whereby the edge of the glass is slightly rounded. According to CPU-Z, the DPI number is an impressive 480 DPI.

The display was convincing in the test of the Cubot X15. Individual pixels are not visible on this display. The colors are strong, the viewing angle is good. The color temperature is extremely warm and can be corrected later thanks to MiraVision. MiraVision is permanently integrated in the settings of the Cubot X15. Here you can choose between predefined profiles or adjust the contrast, the saturation, the image brightness, the sharpness or the color temperature.

The display also supports "5 Finger Touch" and all input was easily recognized within my test. 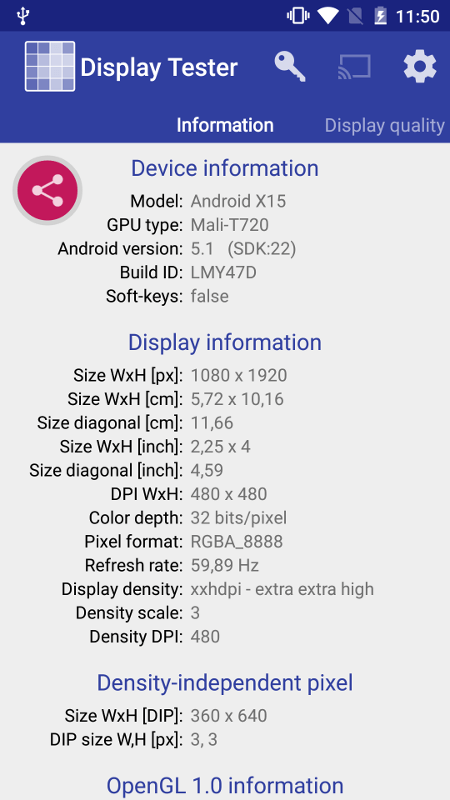 The Cubot X15 has a MediaTek MT6735. This is a quad-core processor with a maximum clock speed of 1.3 GHz. The GPU is a Mali-T720. In addition, the smartphone has 2GB RAM and 16GB internal memory.

In multitasking, the performance of the Cubot X15 was good. Apps open quickly and even with several apps open, I could barely notice a break in performance. UI movements were fluid. However, if you want to play compute-intensive games with this smartphone, you should resort to a more powerful smartphone.

If you do not want to use the device as a pure "gaming smartphone", you will certainly be satisfied with the performance. 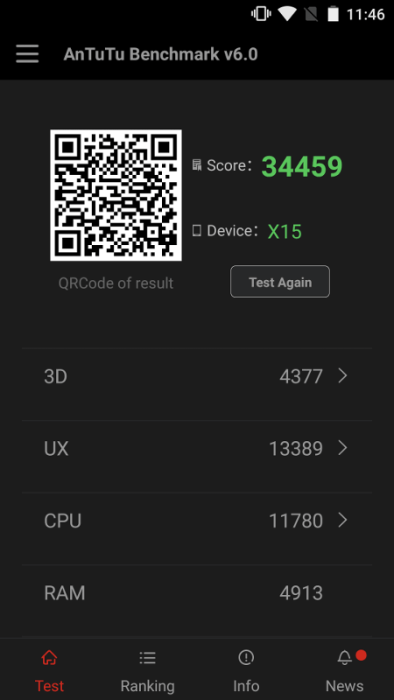 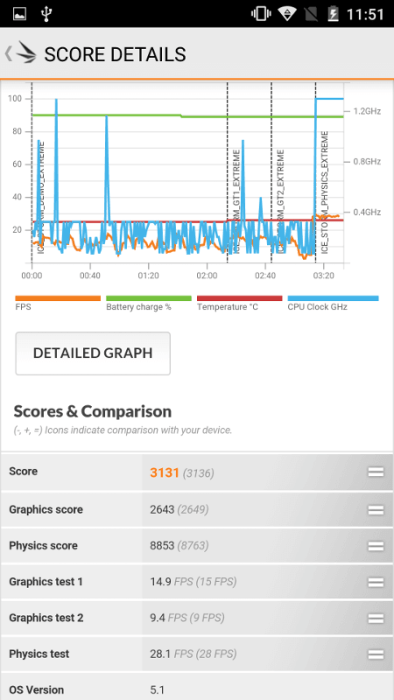 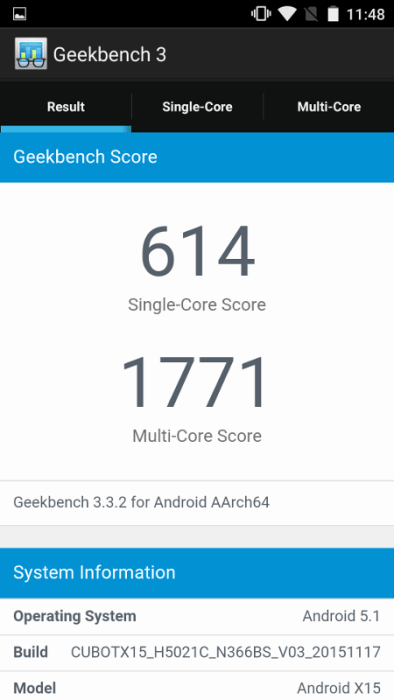 The user interface may take some getting used to, others will probably be highly satisfied with the look of the Cubot Custom ROM. Although Cubot relies on Android 5.1, which is barely different from Google Stock Android, it uses custom icons that do not suit everyone. However, the golden custom icons used here fit perfectly with the exterior design of the smartphone.

Third-party apps are barely installed. Only "HotKnot" and the app "YouWeather" I noticed here.

The settings menu of the Coubot X15 has also been extended with additional functions. Here you will find, among other things, the menu item "HotKnot", with which one can exchange data between two HotKnot compatible devices, under the extended display settings is also MiraVision, which can make more profound display corrections, as well as menu items for gesture control and SmartWake.

The gesture control of the X15 works so well. For example, you can set that you can unlock the smartphone with a wipe, without touching the display.

The SmartWake function allows starting apps with the display off. If, for example, a "C" is drawn on the deactivated display, the camera app opens fully automatically.

These functions can also be completely deactivated.

The Cubot X15 regularly receives updates from OTA (Over-The-Air) at regular intervals. While I do not expect that Android 6 will ever run on this smartphone, security updates or bug fixes will be more common. For example, the last update from the end of November is 2015. 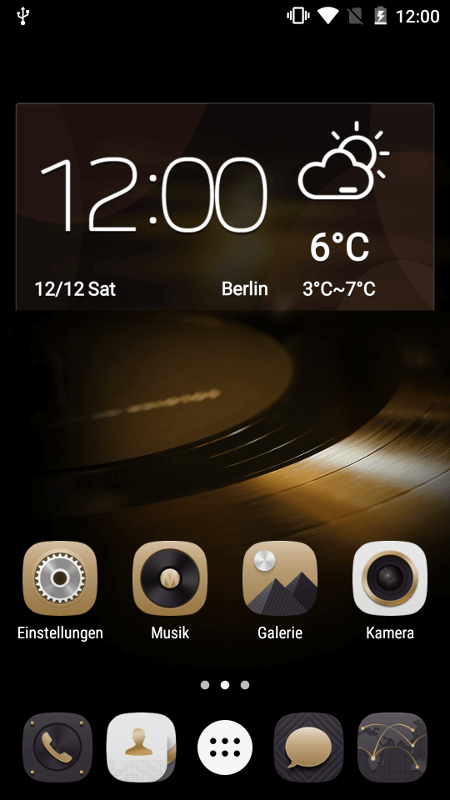 The camera app is the standard Mediatek camera app, which has been enhanced with additional features. Among other things, you can select live effects here, take an angle shot or make a panorama. There is also a motion detection mode and a picture-in-picture mode.

In good lighting conditions, the rear camera shoots quite useful pictures. Picture noise is barely noticeable even when zooming in close. The autofocus works quickly and also the triggering of the recording works fast.

The voice quality of the Cubot X15 is good. In my test, I could understand both my interlocutor perfectly, as well as he could understand me well. I did not notice any susceptibility to interference.

It should also be mentioned that this smartphone is compatible with the LTE Band 20. Accordingly, the X15 can be easily used in the German LTE network.

With regard to the WLAN, there is nothing to complain about. The signal is consistently stable and the range is average. Fortunately, the Cubot X15 is also dual-band capable, which allows the smartphone to be integrated into a 5GHz network.

The Bluetooth standard sets Bluetooth to 4.0. A connection with my speakerphone was made without any problems, as well as the signal was stable.

A GPS fix is ​​done very fast with the Cubot X15. After a maximum of 10 seconds, the position was determined exactly. Even when driving through narrow street canyons the signal remained largely constant and navigation was easily possible.

The battery of the Cubot X15 offers according to the data sheet a capacity of 2750mAh. Thus, the smartphone has installed a rather average battery, but I have achieved with only one charge a screen on time of 8 hours and 13 minutes. The Geekbench 3 value is at 3745 points when unloading from 100% to 1%. In everyday life, I had to recharge the battery in normal use only every two days. 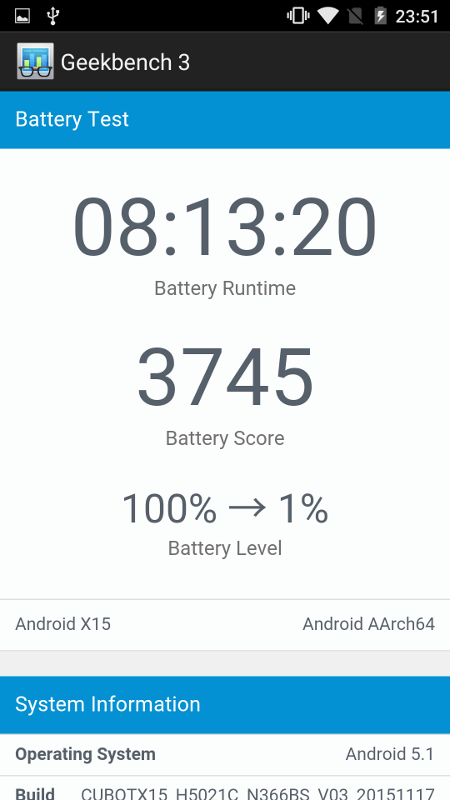 Unfortunately, no e-compass integrated
Just a quad core that is a bit slow in games
Camera responds slowly in low light conditions
Battery not changeable

With the X15 Cubot once again delivers a great package, in which everything runs smoothly. Although no high-end China hardware was installed on the X15, the Cubot X15 can score in terms of processing, the decent display and the good camera.