by Timo31. May 2016
The Cubot H2 is the successor to the Cubot battery "H1". What innovations the new Cubot Smartphone brings along and whether a possible upgrade or new purchase is worthwhile, can be found in this Cubot H2 Review.
Overview
Manufacturer/Model

First impression of the Cubot H2

If you already own a Cubot smartphone of the "X" or "H" series, the typical Cubot cardboard box is also expected for this smartphone. This included an extensive accessory package in addition to the Cubot H2. The additional package includes a glass screen protector with cleaning wipes, a silicone protective cover, a quick charger with 2A output current, a USB charging cable, a SIM pin and even a USB OTG adapter. 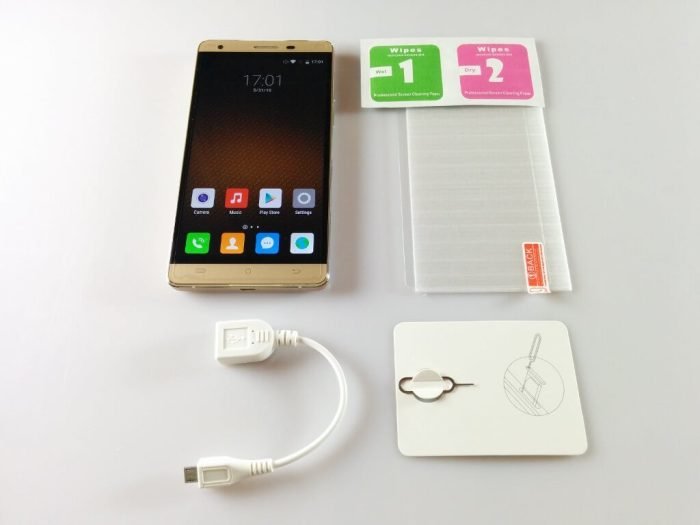 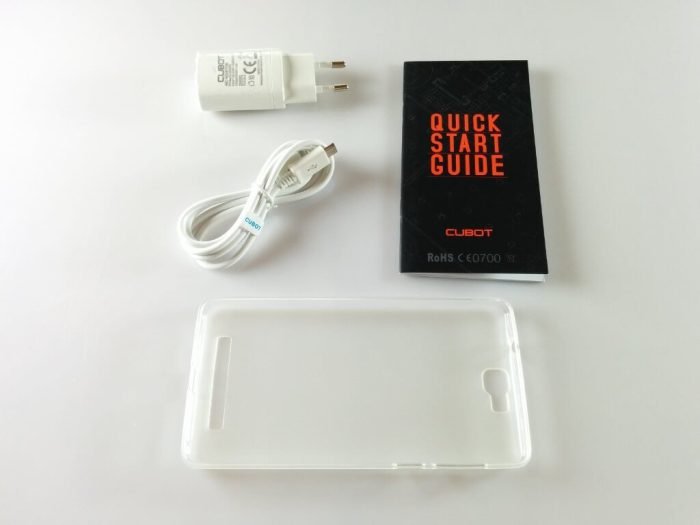 Externally, the Cubot H2 hardly differs from the successor H1, but there are some subtleties that make a difference. After the first hands-on, I immediately noticed the higher weight. Where the Cubot H1 still weighed 200g, the Cubot H2 outweighs proud 230g. The arrangement of the front camera and the proximity sensor has also been changed. Unfortunately, the capacitive buttons integrated below the 5.5 Zoll HD display are no longer illuminated.

The biggest visual difference is on the back. The back of the smartphone is not removable, which also makes the 5.000mAh battery can not be changed. The SIM slot is located on the right edge of the case. The frame is made of aluminum and is very well made. The integrated on the right edge of the case volume rocker and the power button have a good pressure point and sit without play in the frame. At the top there is an 3.5mm audio output, at the bottom of the micro USB socket.

My first, external impression is positive. The smartphone is neatly processed, fits well in the hand and the scope of delivery has surprised me.

The Cubot H2 has a 5.5 inch HD display with 2.5D curved glass. The resolution of the display is 1280x720 pixels, the point density is 267 PPI. The end of the display frame is rounded off by the curved glass, which contributes above all to the better appearance.

The touch screen of the display has properly recognized all inputs during the test. The accuracy is also good, which is why targeted inputs pose no problem. Multitouch is supported with up to 5 fingers.

Despite the comparatively low PPI value, individual pixels are barely recognizable in this smartphone. The color representation of the display is natural. Colors are also displayed strongly, as well as the IPS display provides a rich black level. On MiraVision, for personalized display, was omitted in the Cubot H2.

The maximum display brightness is average. In strong sunlight, the display can still read. The viewing angle stability is also good except for a slight deterioration of the color representation. Only with really strong inclination I could notice a difference in the viewpoint. However, the font remains legible. 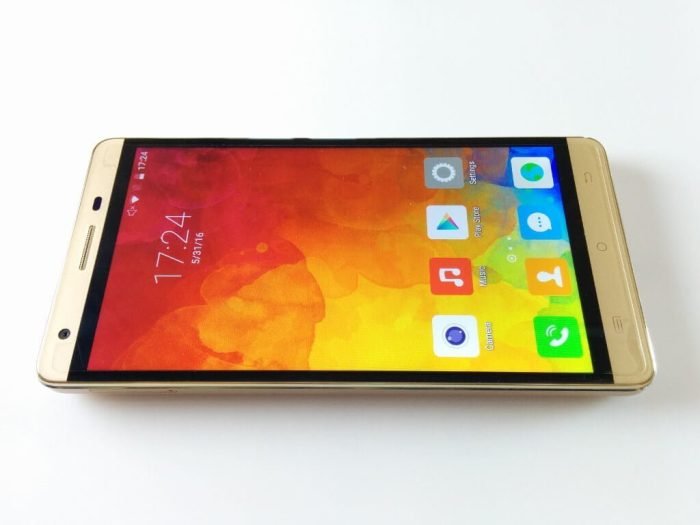 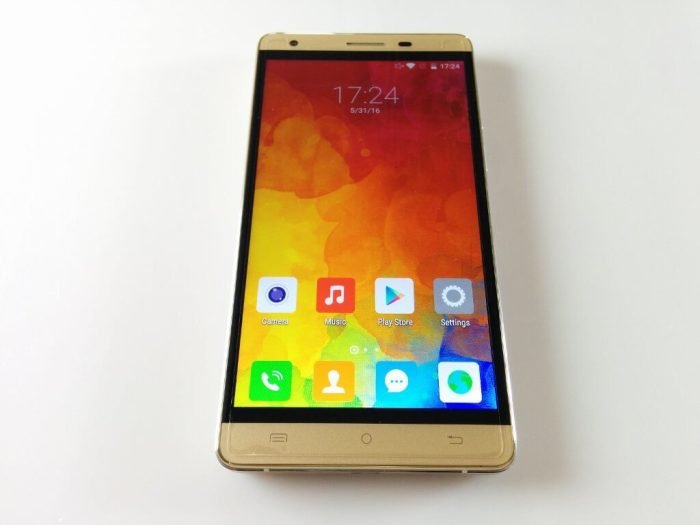 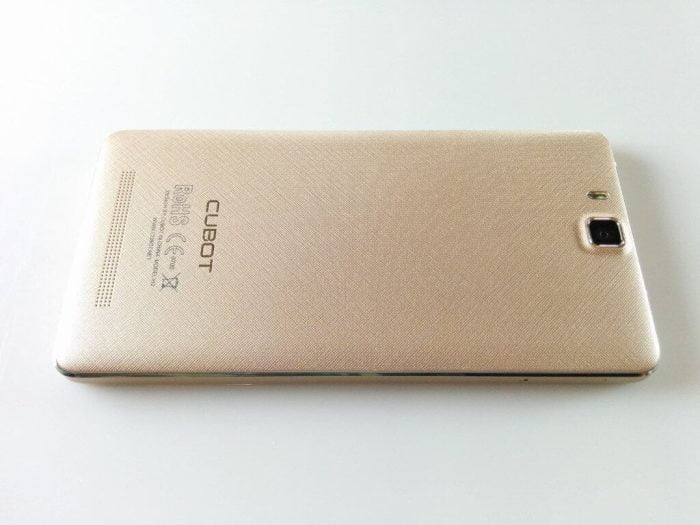 The operating system is Android 5.1 with a customized theme. Third-party apps were pre-installed with the exception of a flashlight app and the well-known "Cleaner Master" app. The custom UI has also added several features. Among other things, the quick launch bar has been visually adapted, in addition, this offers in comparison with Stock Android additional settings.

Also within the attitudes there are extensions. An additional gesture control makes it possible to wake the device with the display off. For example, if you press the display twice, it will be activated. If you draw an "e" on the display, the web browser is started automatically. Other, smart functions work via the proximity sensor. With a swipe over these can be, among other things, the pages of the App Drawers change, as well as within the camera app recordings by swiping triggered.

A notification LED also has the Cubot H2. In the settings, these can be configured to a limited extent. Unfortunately, the light color can not be set, as well as you can not program an individual app on the LED. Updates will receive the smartphone OTA (Over The Air). You should not expect a release of Android 6! 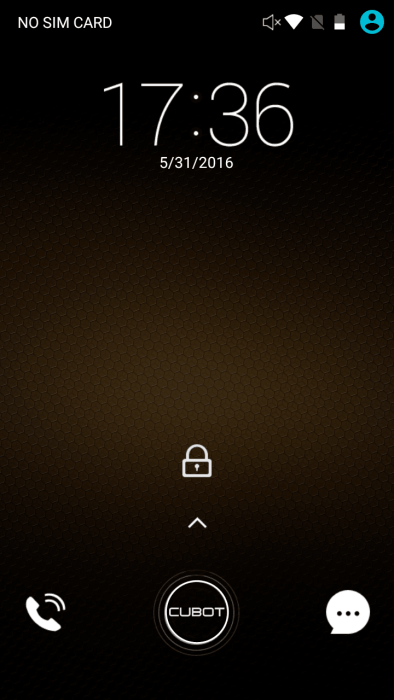 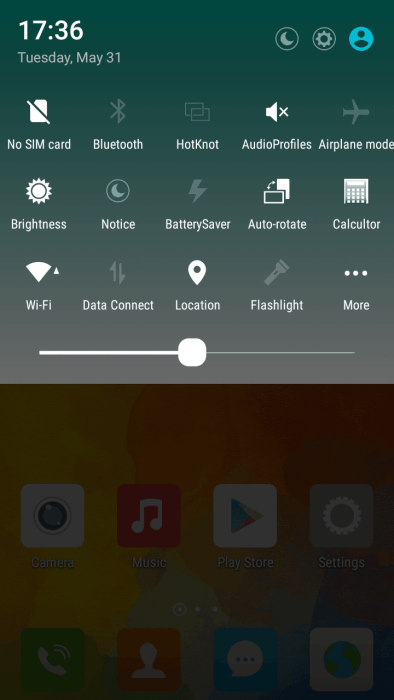 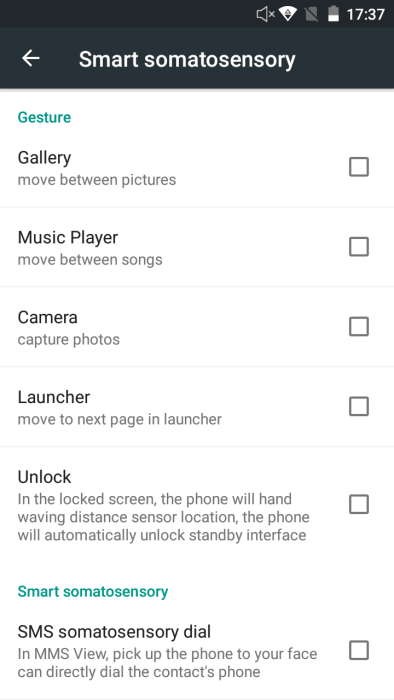 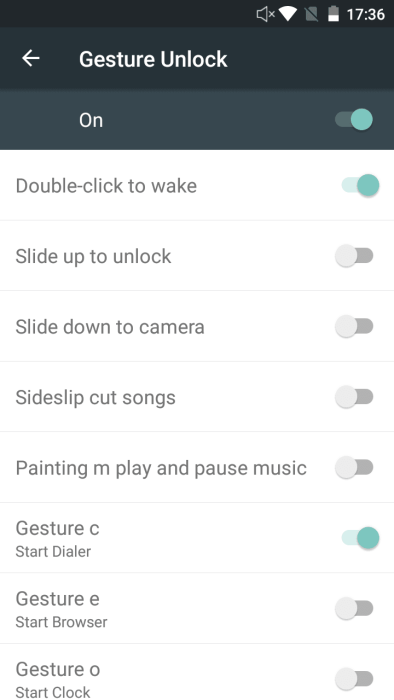 Like its predecessor, the Cubot H2 also has a MediaTek MT6735 processor. However, this quad-core clocks in the H2 with 1.3GHz and thus with 300MHz more than in the H1. The GPU used is a Mali-T720 renderer. The RAM is 3GB and the internal memory is 16GB.

In everyday life, the Cubot H2 can be operated as smoothly as possible. There were no unexpected crashes during the test. Apps can be opened quickly and multitasking is not a problem because of the abundant failing RAM. Poor games can be played smoothly on the smartphone. However, the smartphone is overstrained with more up-to-date titles that require above-average computing power. 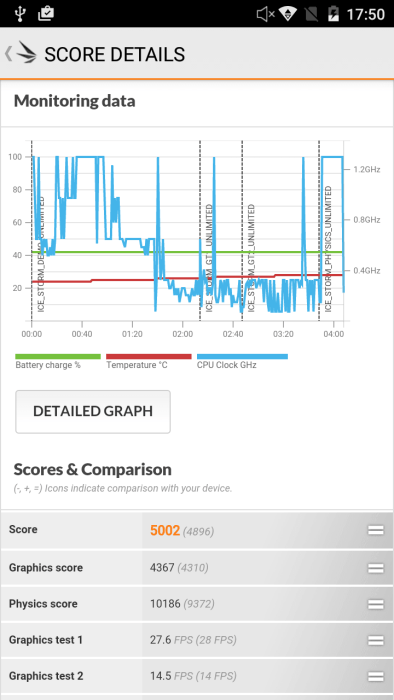 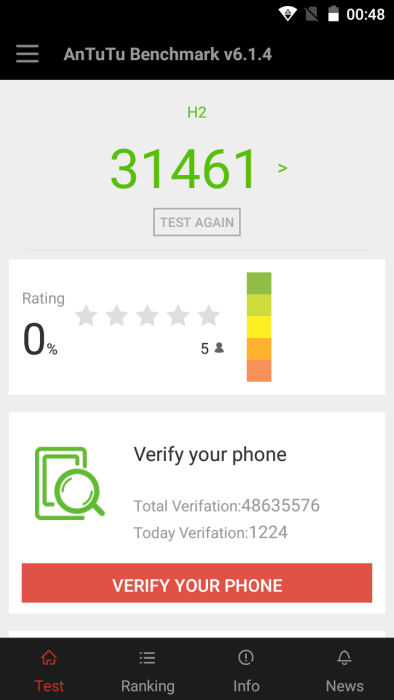 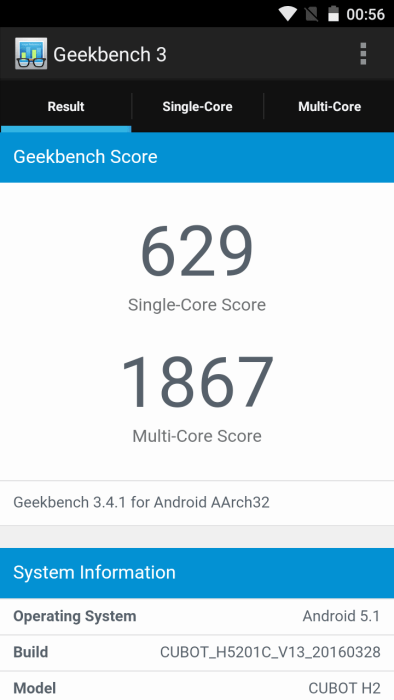 The main camera of the Cubot H2 resolves natively with 8 megapixels (13 megapixels interpolated). The f-number is f / 2.2. The back camera is supported by a dual LED flash. Shooting with the main camera is good on average in good light conditions. The color representation is natural and the picture noise is still in the frame. The autofocus works reliably, but could be a bit faster. The trip time is quite short.

In low light conditions, the camera is a bit sluggish. The noise is also increasing. With active flash, the images are useful. The front camera of the smartphone dissolves with native 5 megapixels (8 megapixels interpolated). The image quality is good, which makes the camera suitable for selfies or video telephony. 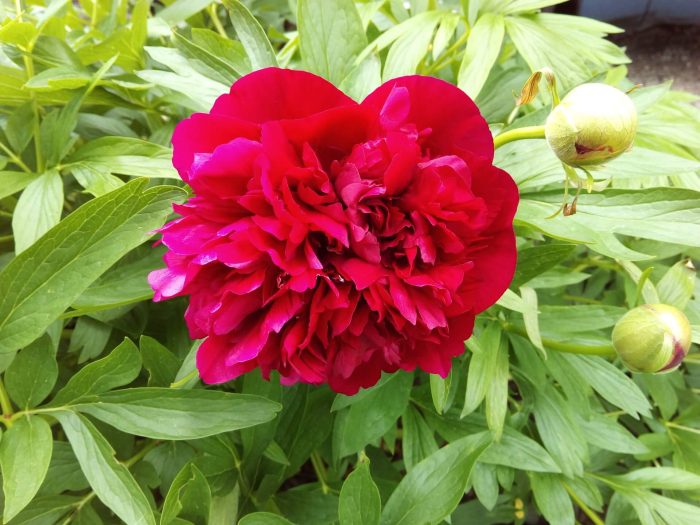 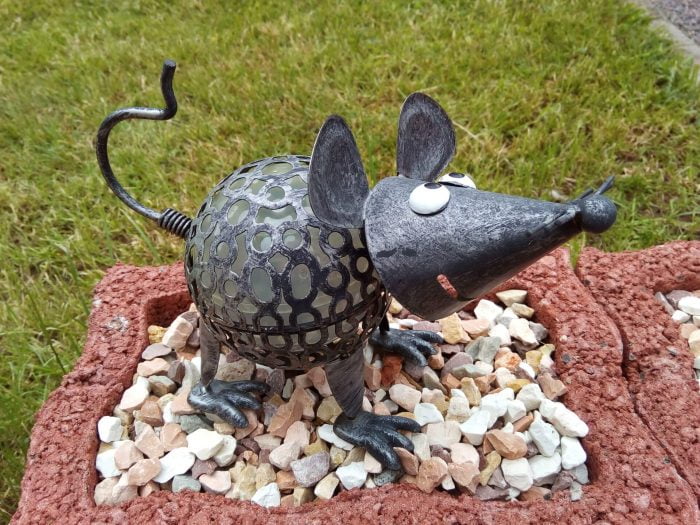 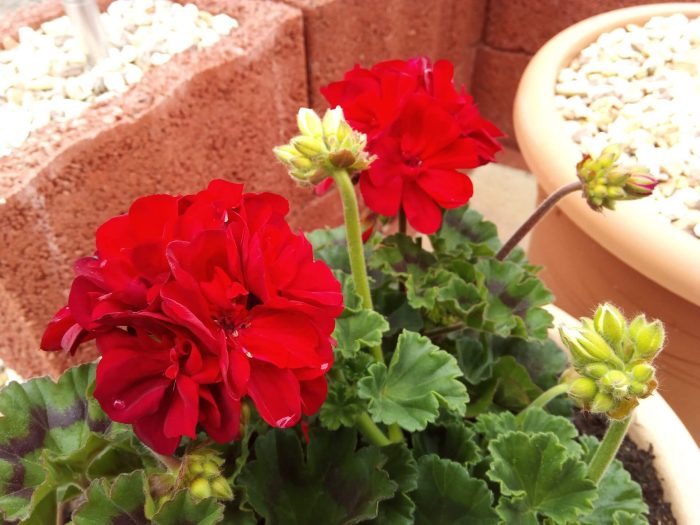 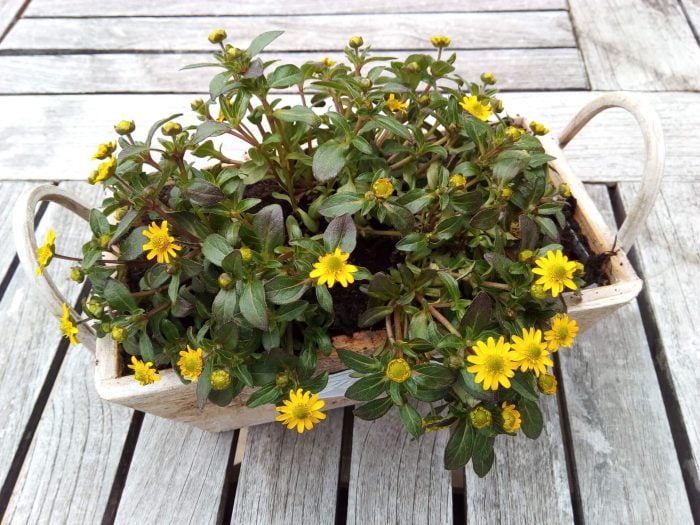 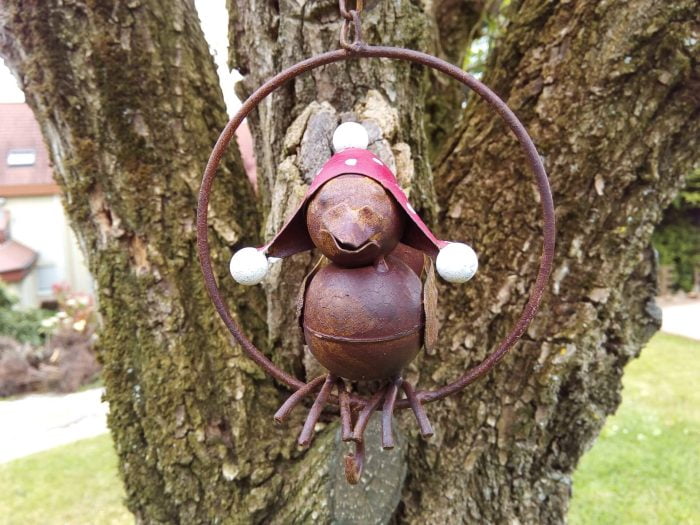 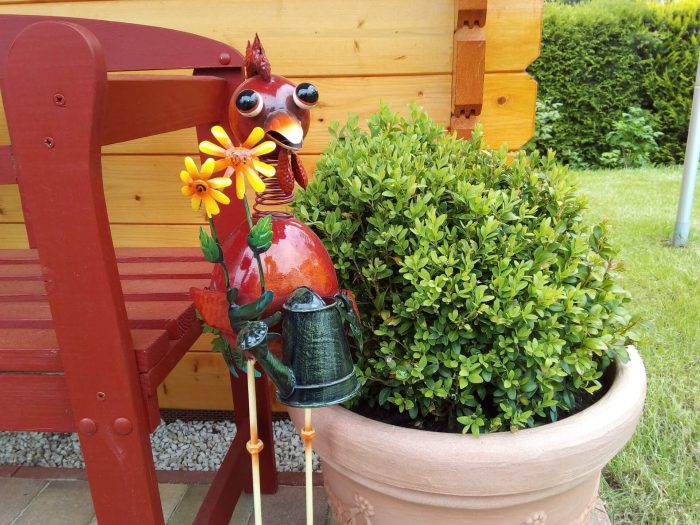 All common mobile radio standards are supported by the Cubot H2. LTE is also fully usable. LTE band 20 is available. During the call, the Cubot H2 convinced with its good reception quality. My interlocutor could understand me clearly, as well as I could understand him without any restrictions. The handsfree function works well as well. The speaker is not tinny even at maximum volume.

It should be noted that the Cubot H2 uses a "hybrid slot" which can either use the dual-SIM function or provide a SIM slot for memory expansion.

The transmission over Bluetooth and also over the WLAN is on average good. A connection with my Bluetooth receiver came about easily and also the connection quality was convincing. Unfortunately, Dual Band WiFi is not supported by the Cubot H2.

The GPS module of the smartphone works accurately. The GPS fix was found within seconds and the positioning is very accurate. Surprisingly, even within buildings, a GPS fix has already been found. However, the device does not have an e-compass.

The installed sensors amount to a brightness sensor, a proximity sensor and an acceleration sensor. 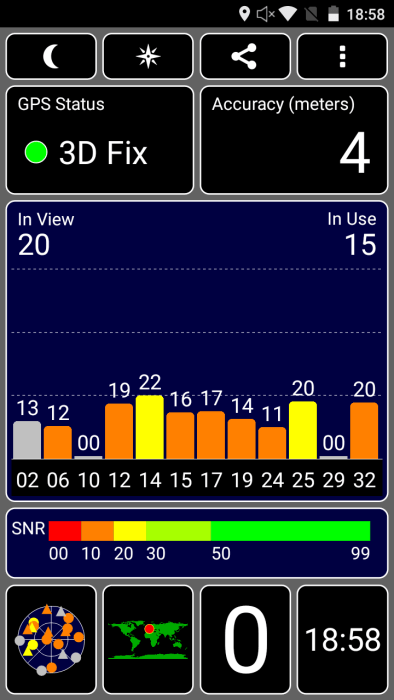 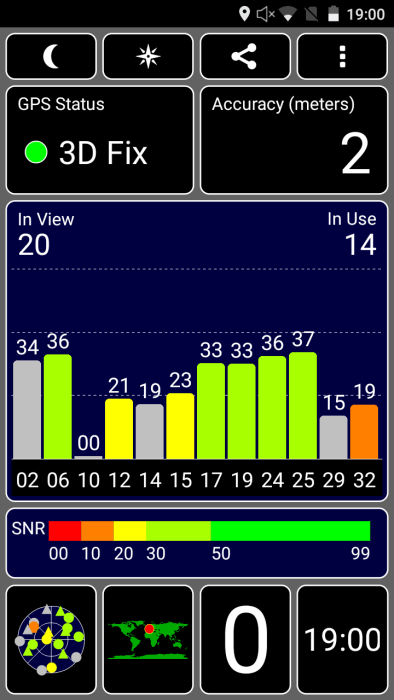 With 5.000mAh battery capacity, the Cubot H2 has built a powerful battery that allows multi-day use. In normal everyday use, the battery has lasted well 3 days. Compared to the Cubot H1, the capacity was indeed reduced by 200mAh, but the mileage remained the same. The only downside of the built in Cubot H2 battery is that it can not be changed. The back of the smartphone is not removable.

It is also interesting that the manufacturer has included a fast charger, which allows the smartphone to fully charge in 3 hours.

The Cubot H2 is a high-performance smartphone with high-quality workmanship and above-average mileage. For those who depend on a large battery that lasts for several days, the Cubot H2 is a good choice. The display is high-resolution and colors are accurately displayed. The cameras are on average good and allow handsome shots.

On the other hand, if you attach great importance to an exchangeable battery and maybe even need an e-compass, you should look at the Cubot H1.