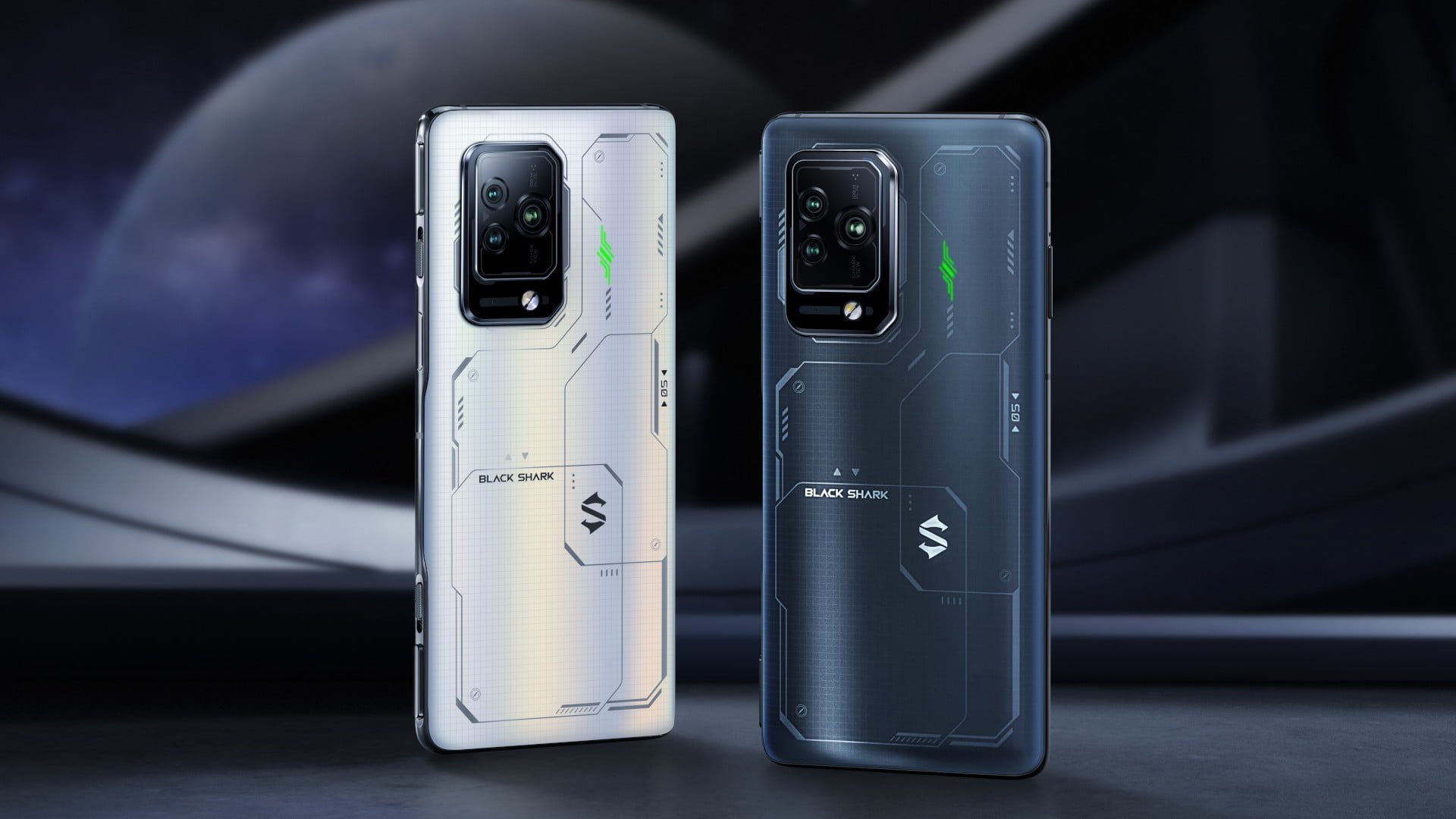 In contrast to Black Shark 4 Series, which was rather neglected and only released in Europe a year after the China release, things are much faster with the new Black Shark 5 smartphone series. 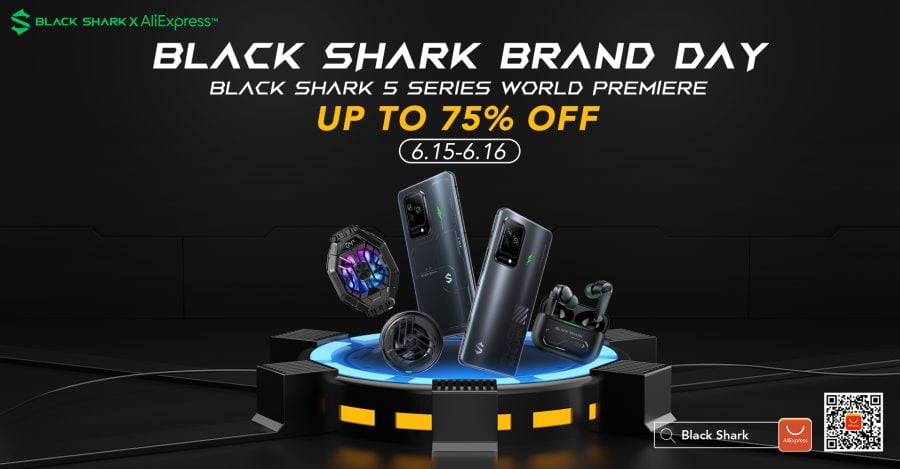 Black Shark Brand Day will take place from June 15th to 16th. On both days there are numerous products heavily reduced in the official Black Shark store. Among other things, the new Black Shark 5 Series. 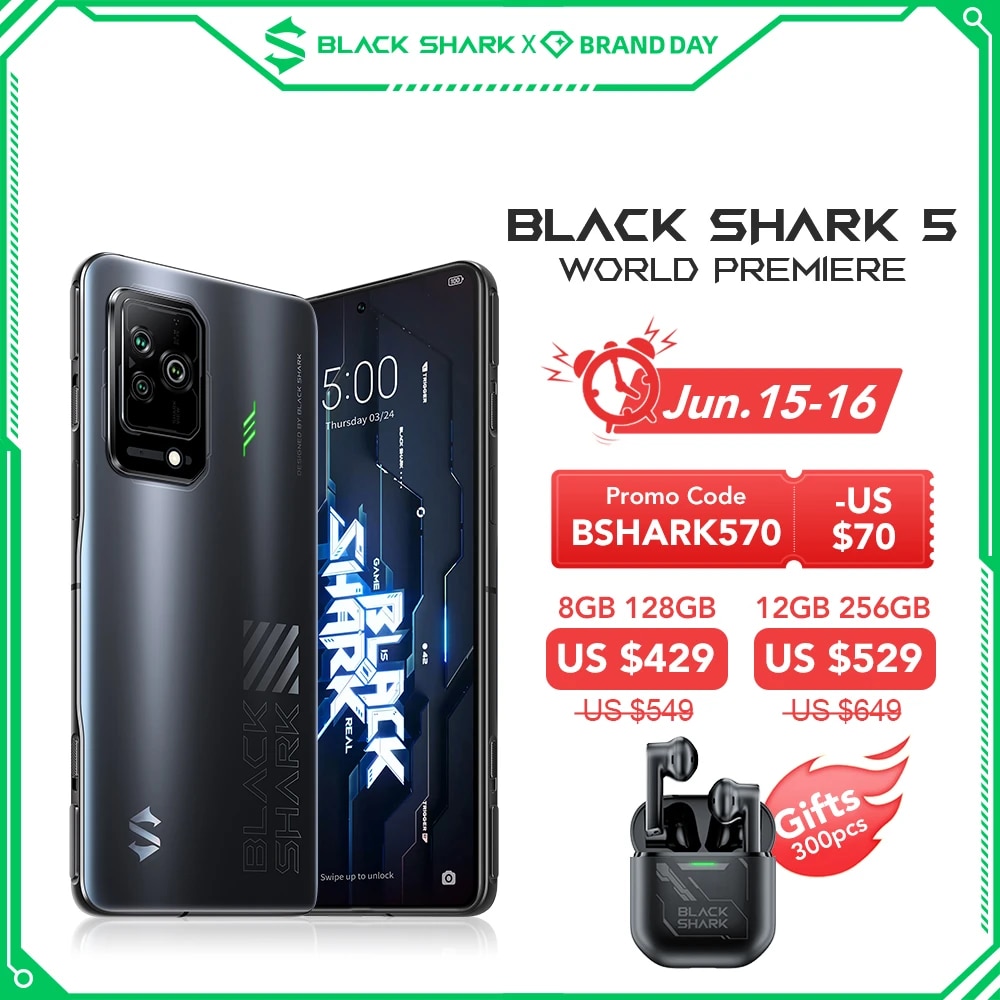 Get a $100 discount on the Black Shark 5 Pro. Retrieve the coupon and enter it in the shopping cart.
BSHARK5100
SHOW COUPON
TO DEAL
100€ Discount
valid until December 16.06th, XNUMX

The three-part gaming smartphone series was only presented in China in March. Three months later it is also our turn as Europeans and we can at least be happy about the Black Shark 5 Pro and Black Shark 5. However, the Black Shark 5 RS, which is placed in between, did not make it to us.

The flagship of the series is the Black Shark 5 Pro, which, in contrast to its predecessor, goes a step further in terms of performance and equipment. The Qualcomm Snapdragon 8 Gen 1 mobile platform, which is built into pretty much every current flagship smartphone, promises top-level performance.

With its 8-core cryo-CPU and the powerful Adreno 730 graphics accelerator, the chip manufactured using the 4 nm process is a real performance monster. Performance-hungry apps and mobile games definitely won't push the Blach Shark 5 Pro to its limits. In the long run, the Snapdragon 8 Gen 1 offers enough performance reserves.

In order to be able to exploit the full performance potential of the Snapdragon 8 Gen 1, the Black Shark 5 Pro relies on two vapor chambers in a sandwich structure, which cool the smartphone down. The cooling inside the device alone takes up a total of 5320 mm². 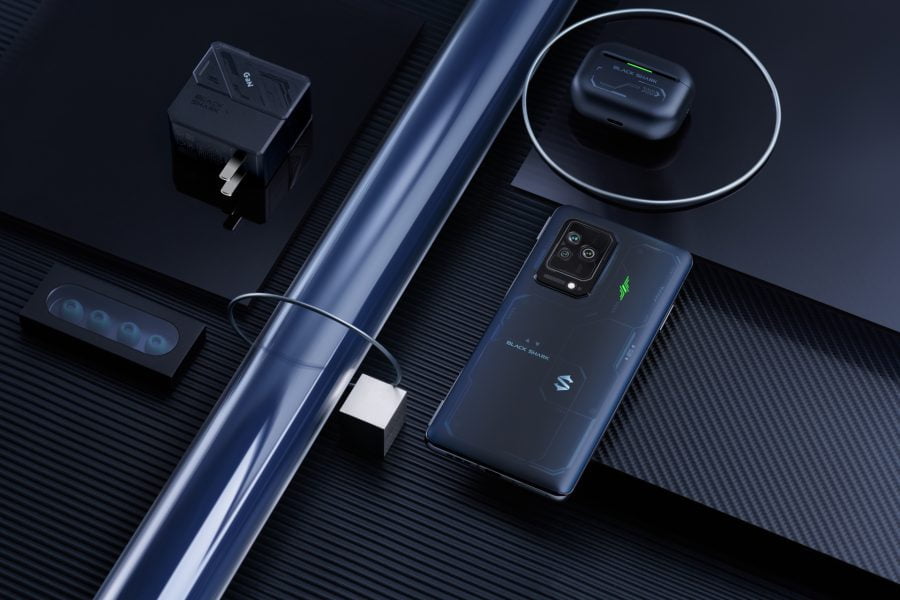 According to the first test reports, the performance loss under full load is around 20 percent. What sounds like a lot is still a good value that only a few manufacturers achieve with the Snapdragon 8 Gen 1. The game engine integrated in JOYUI 13 (Android 12) keeps a constant eye on the temperature development and ensures efficient performance distribution.

The built-in memory of the Black Shark 5 Pro also has a lot to offer. Here you have paired fast LPDDR5 RAM (6400 Mbps) with UFS3.1 data storage. The smartphone is available in the memory variants with 8+128GB, 12+256GB and 16+512GB, although the latter is not yet available in Europe. There are no plans to expand the memory using a microSD. 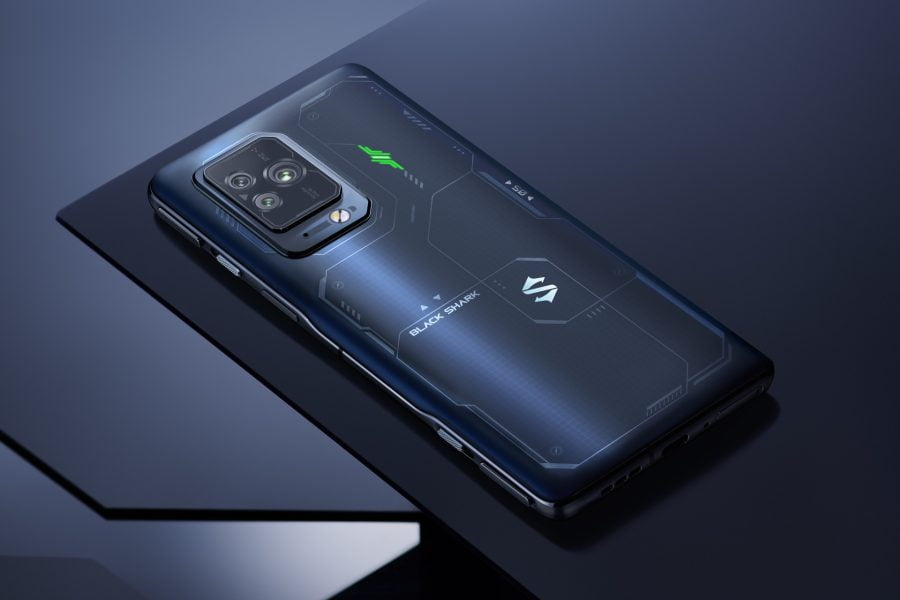 To make the games look good, the Black Shark 5 Pro uses a 6,7″ OLED display with a 10-bit color depth and a 1080 x 2400 pixel resolution. The maximum brightness of the display is specified as 1300 nits, so that it remains easy to read even in the sunshine. The support of MEMC, HDR10 and Widevine L1 should not go unmentioned.

An impressive 144 Hz (refresh rate) ensure a particularly smooth display. A responsive 720 Hz sampling rate enables fast and precise input. At the same time, the touch display is pressure-sensitive thanks to its "Magic Press" function, so that different inputs can be made depending on the pressure intensity. Especially in games with many combos, Magic Press is an excellent addition.

In terms of camera technology, the Black Shark 5 Pro offers a 108 MP Samsung S5KHM2 main camera (f/1.75) with a 13 MP OmniVision OV13B10 ultra wide-angle camera (120°, f/2.4) and a 5 MP Samsung ISOCELL 5E9 macro camera. The predecessor still had a 64 MP main camera with an 8 MP ultra wide-angle camera installed. However, Black Shark has never focused on the camera equipment, so flagship camera quality is not to be expected here.

After all, the first test reports report that the 13 MP ultra wide-angle camera delivers surprisingly good photos. However, the main camera is measured against mid-range devices. The smartphone records videos in up to 4K60. On the front is a 16 MP OmniVision OV16A front camera.

The Black Shark 5 Pro's stereo speaker system, which is certified for HiRes Audio, took first place among the colleagues from DXOMark. Accordingly, the speaker system produces a loud, particularly powerful stereo sound without distortion. Friends of the 3,5 mm jack unfortunately look into the tube! Black Shark has dispensed with this connection option.

But a good sound is only half the battle. Four microphones ensure that you communicate with your fellow players in the highest voice quality.

The 120W Hyper-Charge charging technology is currently one of the fastest of its kind. The smartphone can be charged in two different modes. The "Ultimate Mode" charges the 4650 mAh battery to 15 percent in just 100 minutes. In the balanced "Even Mode" a full charge takes about 24 minutes. Black Shark specifies the battery life as 1200 complete charging cycles. 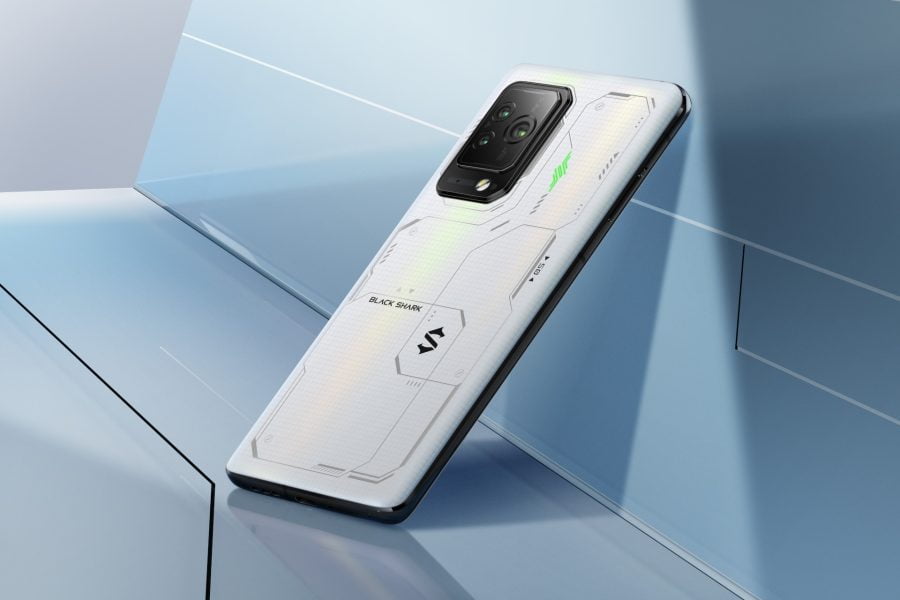 Another difference is in memory. Although the Black Shark 5 is also equipped with LPDDR5 RAM, it has a slightly lower clock rate of 5500 MHz. The display and the special gaming functions are identical on both devices. The Black Shark 144 Pro will be able to make better use of the 5 Hz refresh rate due to its higher performance. 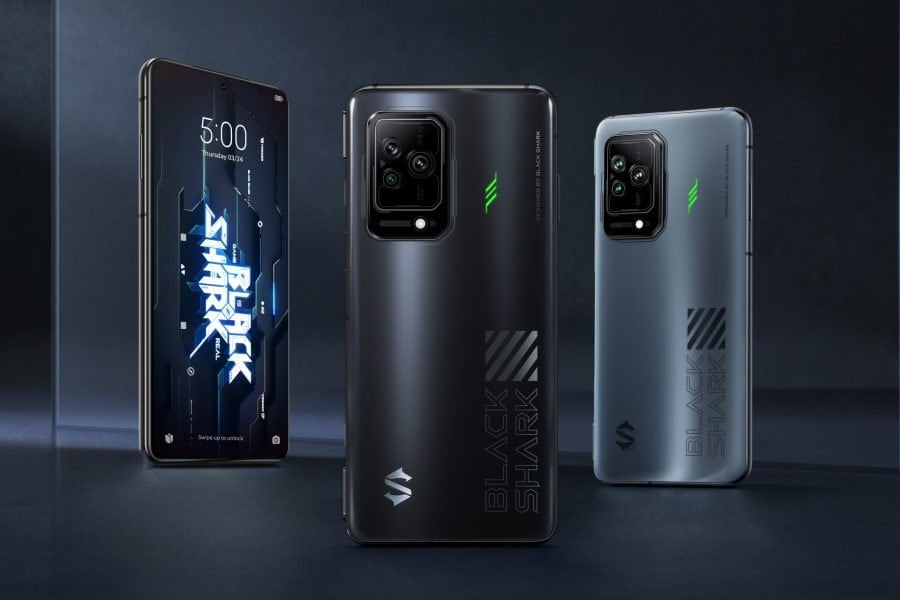 The camera equipment makes a final difference. The main camera of the Black Shark 108 has a resolution of 5 MP instead of 64 MP. The sensor of the macro camera is also different, with a resolution of only 2 MP here.