Alfawise U10 Review, Experiences and Improvements

by Timo28. September 2018
The Alfawise U10 is a FDM 3D printer with a very large pressure field. For something under 400 € you get an 3D printer kit, which is based on the highly praised Creality CR-10. What makes the potential "Creality CR-10 killer" better or worse and whether the printer is worth a recommendation, you will learn in the following review!
Overview
Manufacturer/Model

Who or what is Alfawise?

A few months ago exclusively at GearBest an 3D printer appeared, which is the Creality CR-10 looks similar, at least structurally. The under the name "Alfawise U10" Led 3D printers promises, among other things, a huge print area and also some improvements over models of the competition.

Who visites "Alfawise" knows, will probably wonder why just under this brand name, an 3D printer appears. The brand is mainly known for smart household items and consumer electronics. However, it remains to be noted that Alfawise only one GearBest own brand is to be offered under the most diverse OEM products. The manufacturer is therefore not Alfawise, but an OEM who works in his specific area of ​​production and has the necessary experience. It is quite possible that the Alfawise U10 even comes from the production halls of the Creality CR-10!

Not only is the Alfawise 3D printer quite large, but the package in which it is delivered has it all. After unpacking the approximately 17 kg heavy package you will be greeted by a lot of foam. To avoid transport damage, all the individual parts, in particular the sensitive housing frame and the printing bed, are embedded in a snug fit in the foam inserts. You do not have to worry about flying screws and parts that could cause damage.

In addition to the 3 largest parts of the kit, the rack, the print bed and the "control center", which includes the power supply and motherboard, the scope of supply includes all sorts of accessories. Here is a list:

Assembly of the Alfawise U10

The 3D printer becomes mostly pre-assembled in two large parts, the Z- and X-axis frame part as well as the bottom plate including printing bed. These must, similar to the one we have already tested Anet E10, just put together and tightened. The connecting cables are already connected ex works to the control unit, so that they only have to be plugged into the respective sockets of the connection parts. For the sake of simplicity, the connections are marked according to the respective counterpart. 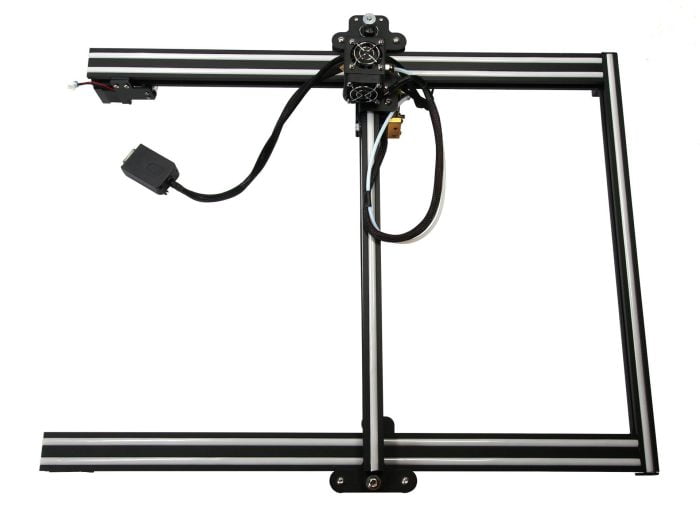 ATTENTION: The cable ends are only tinned. For safety's sake you should provide the cable ends with cable lugs or wire end ferrules.

An illustrated, English-language manual leads understandably by the few construction steps. Furthermore, there are comprehensive installation instructions on the supplied SD memory card. The entire setup including cabling takes about 20 minutes to complete. The already pre-assembled parts should be checked for safety's sake on their strength. Already after the first pressure test, it was noticed that some of the screwed connections were tightened step-by-step. 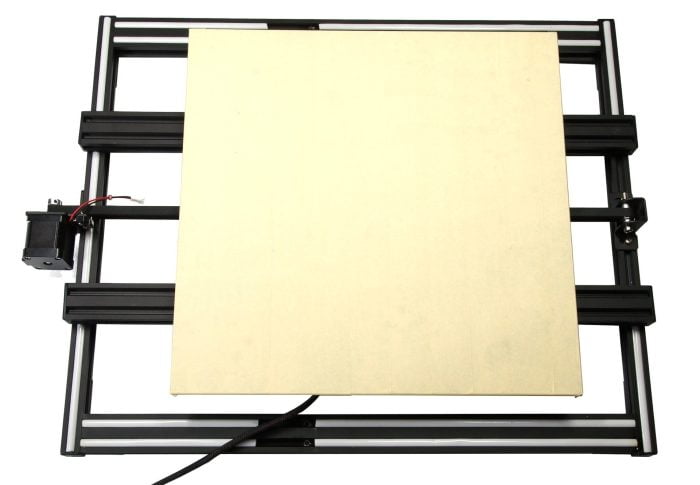 Built up, the Alfawise U10 stands as a one. By the high dead weight of 15 kg and the massive T-aluminum profiles, the 3D printer achieves a very good stability. To avoid vibrations, the floor construction is additionally equipped with rubber feet. 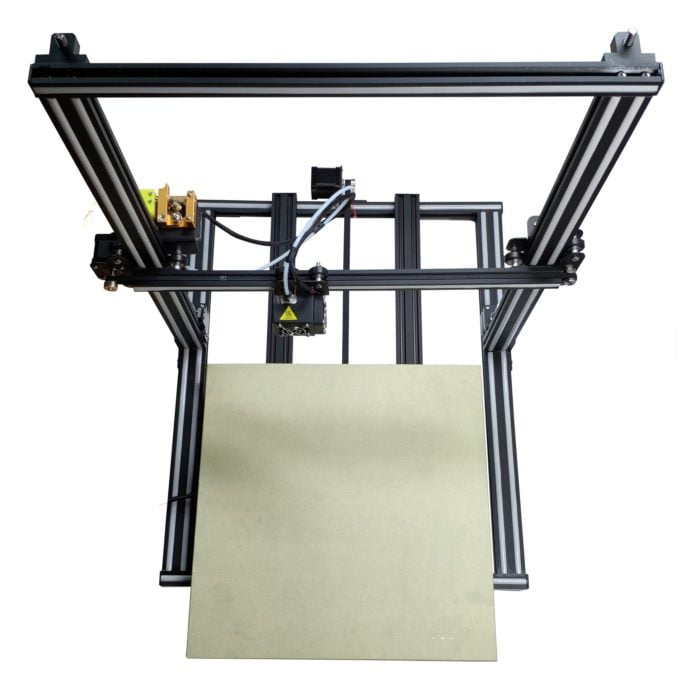 The print volume is proud 400 x 400 x 500 mm, The print bed is not guided by plain bearings, but on two aluminum rails with double-sided roller guide. The timing belt is using a Spring tensioner kept on tension.

The print bed is heated and, according to the manufacturer, reaches a maximum temperature of 65 ° C. Of the Temperature sensor is placed in the middle and soldered to the heating bed. The same applies to the connection cable to the control center, which is also soldered directly to the hotbed. A Cable strain relief is available. Leveling can be the pressure bed on the bottom side Adjusting wheels with spring tension, A masked tape over glass plate is already on the heating bed ex works. This is held by jaws. 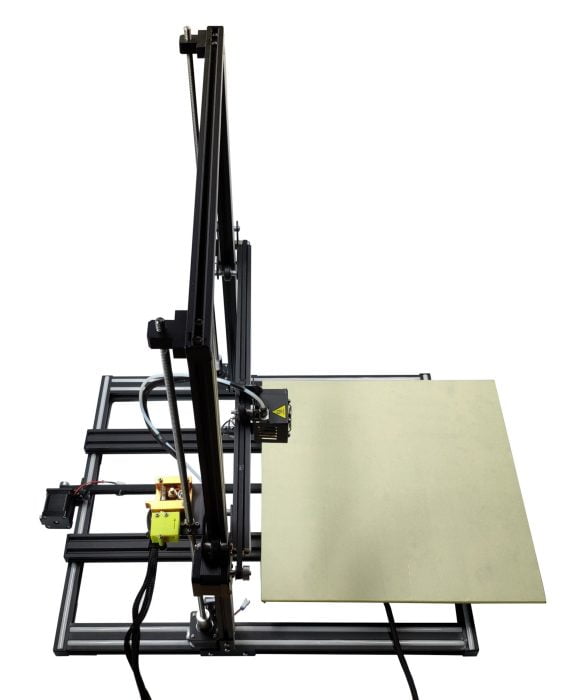 The Alfawise U10 uses one Extruder type "Bowden". Comparison to the direct extruder In the Bowden extruder, the stepper, which drives the filament, is not on the X axis, but is usually attached separately to the printer. This leads to the relief of the X-axis, whereby at the same time a higher printing speed is possible. An essential Disadvantage of the Bowden setup is the higher distance between extruder and nozzle. As a result, the pressure of soft filaments is much more difficult, as well as the filament change is not so easy to perform. 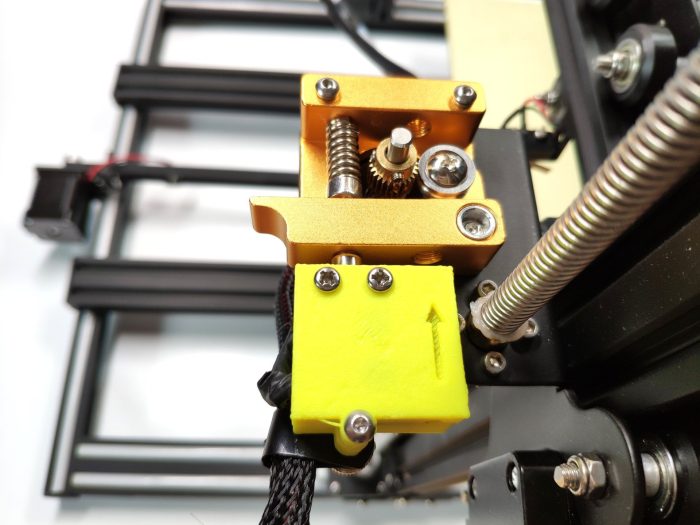 Speaking of filament change: The Alfawise U10 is with a Filamensensor equipped, which stops the pressure as soon as filament is no longer supplied. The housing surrounding the sensor is made of 3D printing material. For (theoretically) more stability on the X-axis provides a second Z-axis stepperthat does not exist on the Creality CR-10 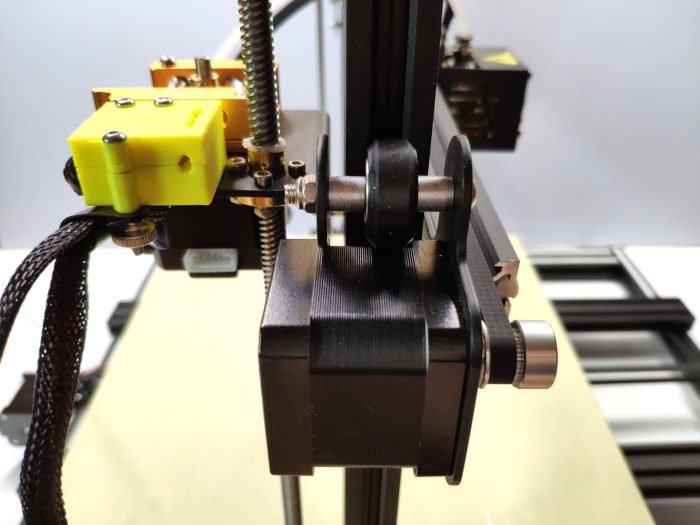 The printer comes with a 0.4 mm nozzle for 1.75 mm filament delivered. The design of the cooling block is in need of improvement. Above all, the object cooling should be criticized here. Although two fans are present, the fan actually intended for object cooling does not blow purposefully onto the print object but rather directly onto the heating block. 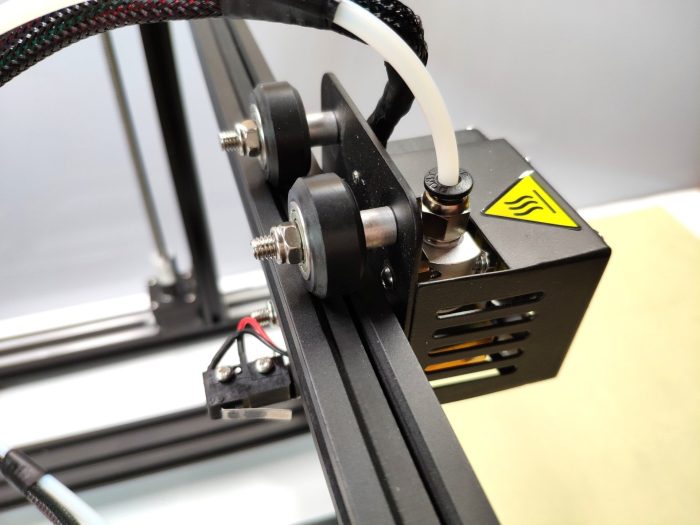 Modified versions of a Alfawise U10 Fan Duct Download it on Thingiverse, so that this point of criticism can be removed without much difficulty. 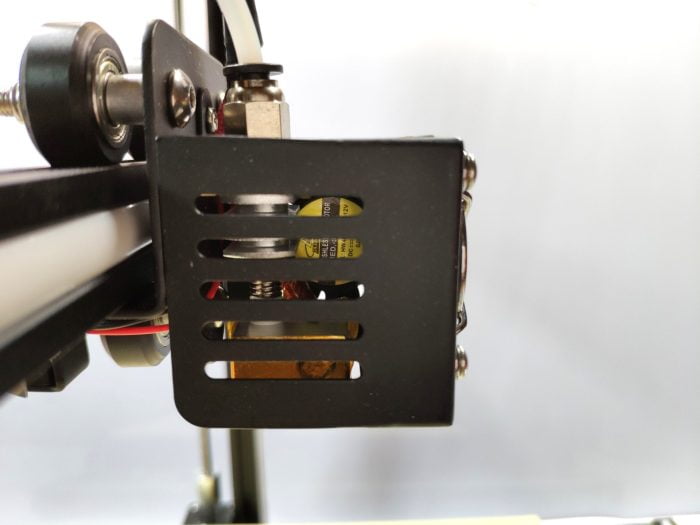 Mainboard, power supply and display are in one separate control unit accommodated. The Cable Management convinced. All cables are sufficiently labeled ex factory and provided with a flexible fabric hose. 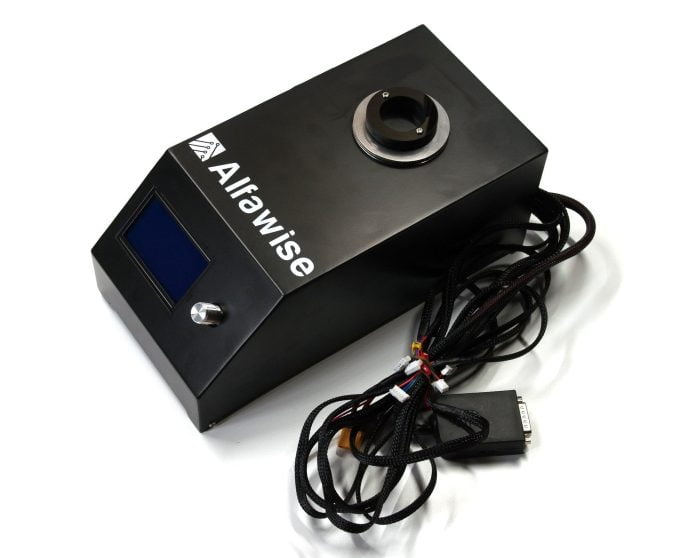 Interesting is the, located on the top of the housing Filament-holder, Standardized coils snap into the holder and are unrolled by the ball bearing design. For communication with the mainboard, there is a USB Type B socket and an SD memory card slot on the left side of the case. 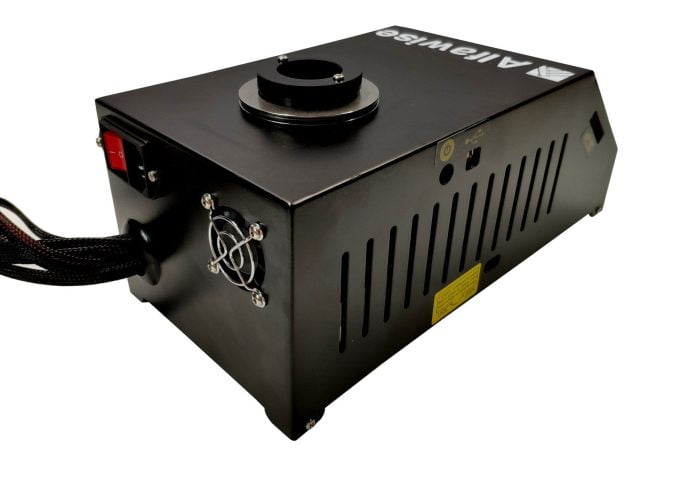 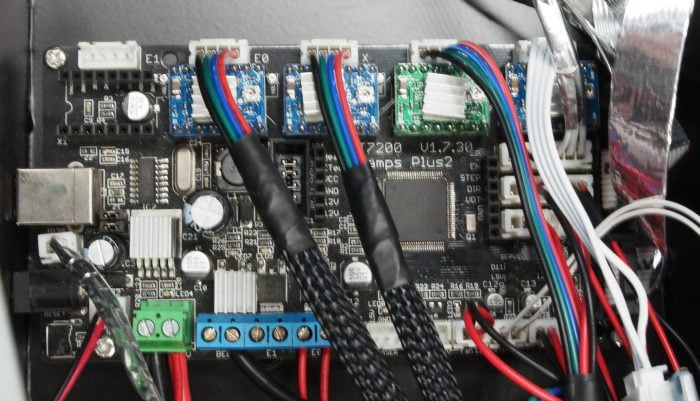 The Ramps Plus2 offers versatile connectivity options and can work with one, among others additional extruder (dual extrusion) or a 12V laser be extended. The built Stepper motor driver bear the name BT7221A. Das Display is a LCD12864_3DYMY, For the energy supply is a actively cooled 12V 30A power supply Responsible with IEC connector and rocker switch. 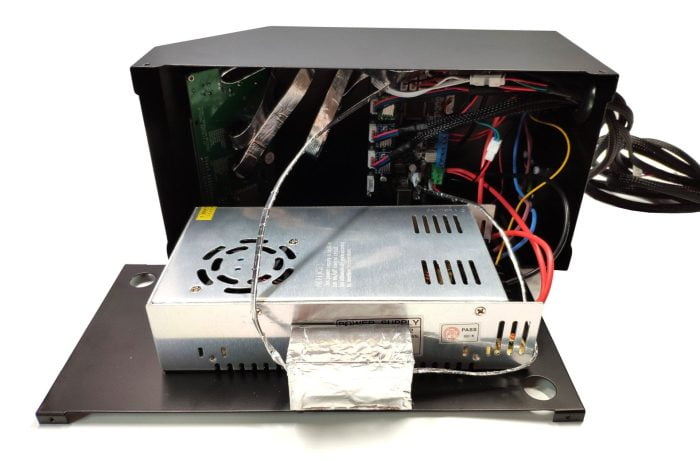 Here again the note that the cable ends are only tinned and you should necessarily provide this with cable lugs or wire end ferrules. Also unavailable and recommended for protection is the installation of one (heating bed) or more (heating bed and hotend) MOSFETs. 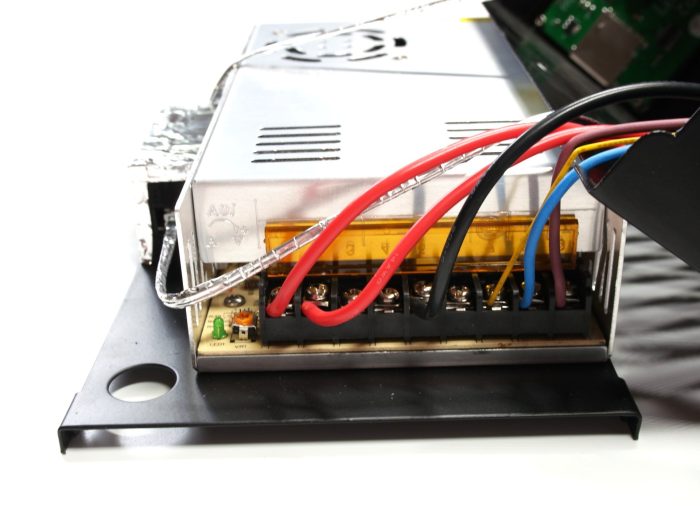 Practical test of the Alfawise U10

Let's go to the printing process. in the several weeks practical test The Alfawise U10 was already enjoying a roll of filament.

The first step was the Pressure bed leveled, This process is no different from other 3D printers. The adjusting wheels, on which the pressure bed is adjusted, are easy to reach and are kept well under tension by the springs. 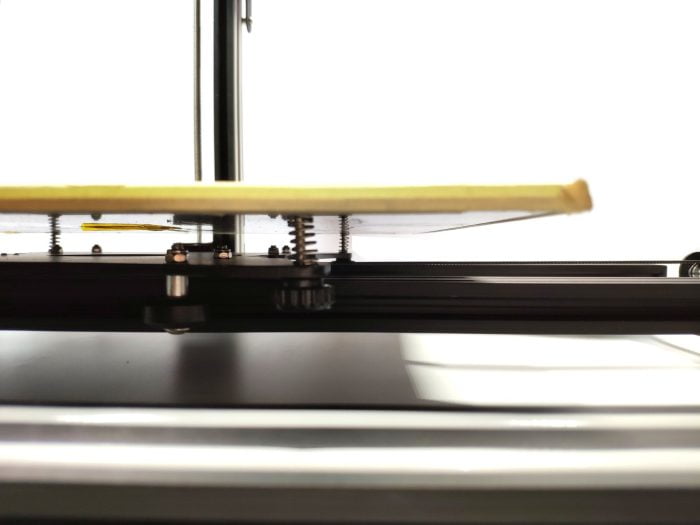 If you have calibrated the 3D printer correctly, nothing stands in the way of a first print. Already prefabricated GCODEs and an older version of Cura with configuration file are on the memory card.

If you start the 3D printer, you will get a modified one Marlin 1.1.0 Surface welcomed. Modifications the firmware has learned that a Filament management was integrated, which automatically stops the Filamentzufuhr using the filament sensor. In the test, the filament management proved to be reliable. As soon as the filament ends, the print is paused and the printer is placed in the home position. Once you have changed the filament and confirmed the process, filament can be supplied at the push of a button ("Extrude more") become. Subsequently, the printing process can be continued automatically ("Resume print"). 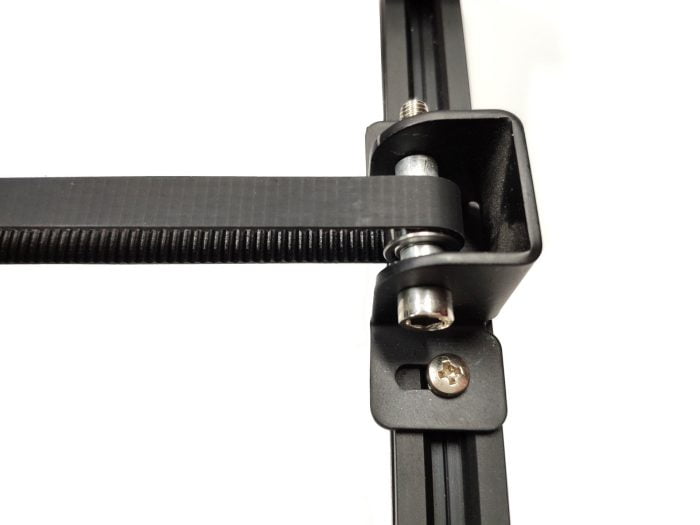 Another feature is the Resume Printing Functionwhich is intended to enable the printing process to continue even in the event of a power failure. This function also proved to be reliable in the test and enabled a flawless continuation of the printing process.

Nevertheless, the firmware is not perfect. To criticize is the file management. Memory cards are often not recognized, as well as the firmware does not allow access to subdirectories. All GCODEs must therefore be stored in the main directory. The firmware used by Alfawise is stored open source on the supplied memory card, so that it can be adjusted as desired. 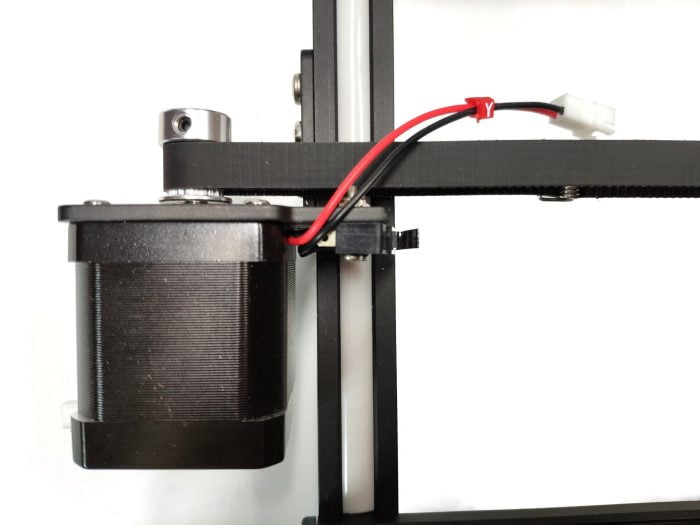 Already in the warm-up phase are first Disadvantages of the huge print bed, Until the heating bed a Temperature of 50 ° C Achieved, pass on average 10 Minutes. maximum temperature reached and constant temperature was included in the morning, More can not be gotten out of the uninsulated heating bed of the Alfawise U10. Straight ABS prints are thus much more difficult.

After several printing processes, only one conspicuousness has been shown. The Z-axis is led too loose. This creates vibrations that can affect the print result. The remedy is a modified axle guide with ball bearings. Suitable templates can be obtained from Thingiverse. 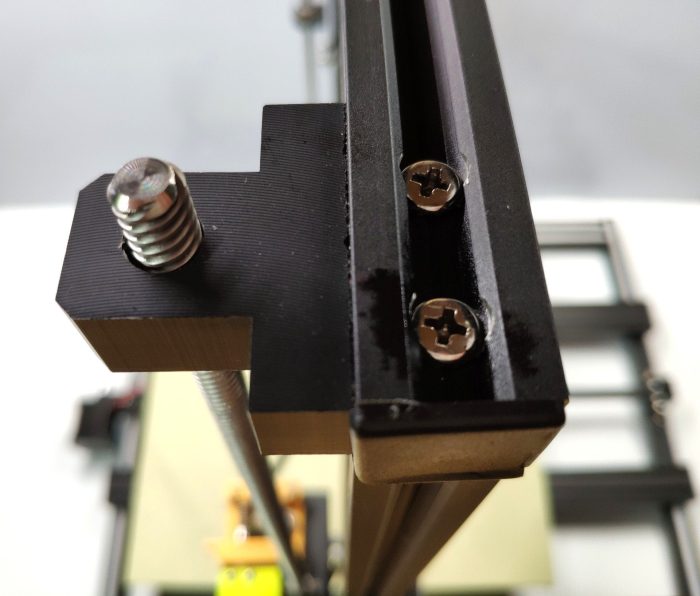 Apart from the clattering Z-axis falls the Pressure volume average and comparable to a Creality CR-10. If you like quieter, you should replace the fans with softer models.

The "Out of the box" print quality is presentable. However, without optimizing the printer, staggered layers may result due to minor vibrations caused by loose screws. Here again the note that you should check all screws and timing belts for their strength before the first print. The recommended print speed is 50-60 mm / s. It is recommended to remove the masking tape right at the beginning and to print directly on the glass surface. With a commercially available glue stick or hair spray you get enough grip on the glass plate.

Do you have further questions about the Alfawise 3D printer? With it in the comments, or joins the German Alfawise support group on Facebook!

To the Alfawise Community

You want to buy the Alfawise U10? In our price comparison we list the current offers of the most popular shops. All prices are checked and updated several times a day. Should a shop appear several times, it concerns the different warehouses of the dealer.

The Alfawise U10 is a well-implemented China 3D printer, which could become quite dangerous with growing awareness of the Creality CR-10S. What speaks for the Alfawise U10 is the particularly large print area, which hardly limits the user. Well implemented are the two-sided Z-axis guide, the pressure bed guided on two aluminum rails, the filament stopper and the control center with the latest Ramps Plus2 BT7200 board.

The 3D printer gains some points of criticism due to the partly faulty Marlin firmware, the slowly accelerating heating bed, the lack of pressure-object cooling and the vibrating Z-axis guidance. What the unit also misses are secured cable ends and a MOSFET fuse.

Alfawise C10 - Laser engraver and milling machine in one
look at

Hello, Alfawise U10 or the Creality CR-10S? Thank you!